"In the past I kind of took my striking for granted and I focused on
everything else. I went back to boxing and Thai boxing and I think this
time will be way better." - Costa Philippou 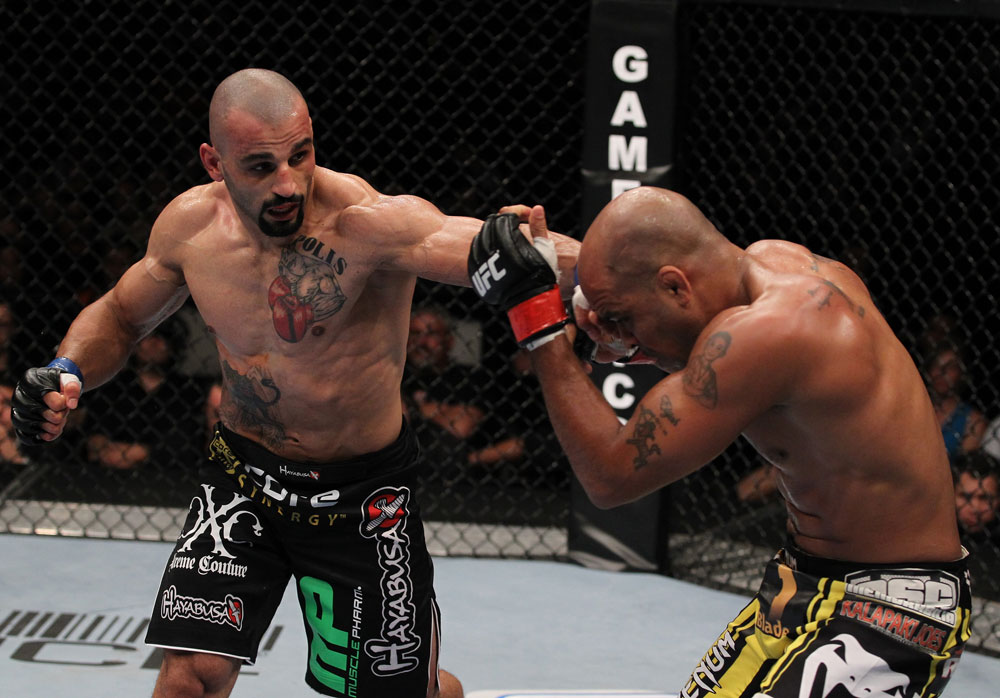 If you’re not a fan of Costa Philippou’s two fights in the UFC, then join the club because he’s isn’t either.

In his first six months in the organization, he has fought to two decisions and split the results: losing the first to Nick Catone at UFC 128 and winning the second against Jorge Rivera at UFC 133. Both efforts were arguably Philippou’s worst in his overall 8-2, 1 NC career and neither showcased his much talked about former professional boxing experience (3-0). If anything, he is as mystified by his seeming devolution as a mixed martial artist than anyone, but Philippou is hoping to change all that in his next outing at UFC 140 against Jared “The Messenger” Hamman.

“In my days in Ring of Combat I was fighting, I was striking, I was punching and, now, I don't know what happened,” tells Philippou. “I got into the UFC and instead of getting better, I got worse. I guess all the lights and the publicity and the crowd got me all stressed out and I lost it. Yes, I'm saying I'm a striker, but I haven't shown any of my skills. In the gym, I'm a different fighter and in the cage when fight time comes I'm worse. I'm not even 50% of what I do in the gym. If I could do even 50% in the cage what I do in the gym then I wouldn't have to worry about any opponent. I'm trying to establish that this time. I want to show everyone that I am a striker. Everyone hears that I'm a striker and they have had to wait to see me show my skills. It looks like I don't even know how to do anything, so everybody’s wondering.”

In all fairness, Philippou’s had some extenuating circumstances that have affected his performances. “I had five days notice, to be honest, and I took the fight and I was so excited that I was going to fight in the UFC that I didn't think about anything else,” remembers Philippou of his extremely short notice debut fight in March, where he subbed in for Dan Miller against Catone as Miller was bumped up to fight Nate Marquardt. “Everyone’s goal is to win the fight, but I knew my chances to win were next to nothing. I was out of shape and overweight and I just didn't want Nick to finish me by either submitting me or knocking me out. I took my beating, I stood up, said ‘thank you’ and that's about it. And two or three days after the fight, I was back in the gym getting into shape for the next one.”

At 32 years old, the native of Cyprus is an open book and candid about his less than stellar bout against the New Jersey wrestler Catone. Philippou estimates he gave what he had in the first few minutes and spent the rest of the 15 minutes in survival mode, which is understandable for a guy who was 20 pounds heavier just five days earlier with zero prep time. What is truly maddening to him is what happened in the fight he actually won against the heavily favored and respected UFC veteran Rivera in August.

“I was stressing out,” admits Philippou. “I had to fight a great fighter on the main card and I only had a couple weeks notice on that. To be honest, the whole idea about fighting in the UFC and on the main card stressed me out and it showed in my fight. I didn't follow my gameplan at all. The gameplan was to keep the fight standing and to exchange punches and strikes. I do have striking skills. I don't know what was going through my head at the time. I ended up clinching and taking Jorge down and I didn't know why and I kept doing it. I can't explain what I was doing and what was going through my head at that time. Luckily, I ended up winning the fight. I feel better now and hopefully I can show off my skills in this fight and do a better job.”

Originally, he was scheduled to meet Rafael Natal on the UFC 133 undercard, but Rivera’s opponent, Alessio Sakara, dropped out due to an injury and the UFC came calling. Philippou took the fight with Rivera immediately without even consulting his coaches because Rivera was an obvious step-up in notoriety and someone he could theoretically trade with on the feet. Also, there was a hesitancy to fight Natal because he trains under Renzo Gracie, who is the mentor of Philippou’s coach, Matt Serra. Nevertheless, it was more or less a case of UFC “jitters” that transformed what everyone expected to be a standup duel into Philippou shooting for takedowns and turning it into a grappling match.

With all that being said, he is coming off a tough victory over a high profile opponent and has truly yet to show what he is capable of inside the Octagon. “First of all, the next time I fight, I'm not going to let every little thing get to me and let myself get stressed out about fighting,” affirms Philippou, who has not only come to grips with fighting in the UFC, but now knows what it is like to face a big name opponent on a big PPV card and can simply focus on training and fighting. “This time, I went back to doing what I was comfortable doing two or three or even 10 years ago. I didn't stop practicing my wrestling and jiu-jitsu, but in the past I kind of took my striking for granted and I focused on everything else. I went back to boxing and Thai boxing and I think this time will be way better.”

Up next for “Costa” is the personification of an antidote to a boring fight, “The Messenger” Hamman. The two-time Fight of the Night winner is coming off a wildly impressive middleweight debut in the form of a second round finish of CB Dollaway at UFC Live in August. Hamman entered the UFC as a light heavyweight and went 1-2 before making the plunge to 185 pounds, which worked out amazingly. Hamman is quickly becoming a fan favorite with his fast paced fights, iron chin and relentless pressure on his opponents.

“That guy is obviously a great fighter,” states Philippou. “He has two Fight of the Night awards. He beat up CB Dollaway and stopped him in the second round and CB Dollaway is a great fighter with a lot of experience. He's a bigger guy with a longer reach, so it won't be an easy fight, but I'm positive that I'm in shape and I will be ready to go three rounds 100%. I was happy he is a guy who chooses to strike, so I don't have to worry as much about him chasing me for the takedown to submit me or wrestle with me. It will be easier to keep it standing and strike with him and put on the fight where I can show I can actually kick and punch and put up a good fight - not like last time. Last time, it was a boring fight. I wouldn't want to watch a fight like that. I'm hoping to put on a show this time.”

Philippou is busy training for this fight out on his adopted homeland of Long Island with the New York’s dynamic duo: Serra and Ray Longo. Costa began his foray in combat sports in 1994 as a boxer. Fourteen years later, Philippou made the switch to MMA and has been playing catch-up ever since as far as learning wrestling, jiu-jitsu and, basically, everything else. As he continues to evolve in those martial arts, he decided to go back to basics and sharpen up the tools that got him into the UFC: his striking. To do so, the 5’11” Philippou has put himself through the ringer, sparring with bigger opponents in preparation for the taller Hamman.

“I've been training with Chris Weidman,” says Philippou. “We spar all the time. He has been helping me with my wrestling, jiu-jitsu and even with my striking. He is 6'2" and has a very long reach. Gian Villante is a Strikeforce fighter at 205 and Dave Branch out of Renzo's is also 6’2”. They're mostly wrestlers and jiu-jitsu fighters, but they have long reaches. I have been going to different boxing gyms this time and sparring with taller opponents, so I get used to moving and punching the way I used to. My whole life I was fighting taller and bigger opponents than me. I'm obviously a smaller guy and I used to be a heavyweight boxer - picture that. I think I got most of my boxing skills back and I think my reaction time will be way better this time.”

At UFC 140, Philippou is looking to show in his clash with Hamman something fight fans have yet to see from him inside the Octagon: a performance he is truly proud of. “I would like to finally show them I belong in the UFC and I didn't just get lucky and I got a call and I ended up in the UFC,” asserts Philippou, who is almost too self-deprecating for a game cagefighter coming off a win over a well-known opponent. “I hope to show them I have the skills and I am a real UFC fighter. Some people think I got lucky with my last fight. I got tired, so I don't blame them, but I would like to show them I have the skills, I'm in good shape and I can put on a good show.”

With a victory over Hamman, Philippou will have plenty of fans, including himself again, because everyone loves a winner.