Cory Sandhagen Trained Like A Champ Since Day One

A Journey Comes Full-Circle When Cory Sandhagen Fights For Gold AT UFC 267 In Abu Dhabi
By Zac Pacleb, on Twitter @ZacPacleb • Oct. 27, 2021

Cory Sandhagen had a sense this might happen. This, of course, being the opportunity to fight for the bantamweight title in Abu Dhabi at UFC 267. About a month-and-a-half before the scheduled date, Sandhagen was debating whether or not to start training like he had a fight just in case something went awry. Sandhagen was helping his Elevation Fight Team training partners prepare for fights, and he spends most of his time in the gym anyway. A few days later, he got the call to fight Petr Yan for the interim title, and that answered that.

Six weeks to prepare for the biggest fight of his life against a fighter appropriately nicknamed “No Mercy.” In his mind, the timing of it all worked out “beautifully,” and other than flipping the fight camp switch, he didn’t have much of a shift mentally just because this fight is for gold.

“If I could work harder, I would be working harder,” Sandhagen said. “There is no working harder for me. I work as hard as I can Monday through Saturday, I take Sunday off, and it’s literally everything that I can give in those six days. I remember actually talking to my sports psychologist. I was like, ‘Man, it’s a championship fight. I feel like I should almost be doing a little bit more. Blah, blah, blah,’ and he was like, ‘Haven’t you always been doing everything you can do for every fight?’ And I was like, ‘Well, yeah. Absolutely.’ It feels like you should be doing a little bit more, but I’ve been giving it my all for many, many years now, and that’s why I get this.”

Although Sandhagen is a little less than four years into his UFC career, his journey started when he walked into a mixed martial arts gym as a 16-year-old. Now, at 29, more than half of his 17-fight professional career has been spent at the highest level, which is quite the stage to hone his skills and abilities.

There have been bumps, sure, but not many of them. Even after dropping his last fight to TJ Dillashaw in a razor-close split decision, it was clear Sandhagen had the goods to go after the bantamweight title, a belief he’s had since the moment he started down this path.

“I’ve been training like a champion for the last - honestly, I feel like since day one of mixed martial arts for me,” Sandhagen said. “I’ve had to learn how to be a champion, but as far as effort goes, and as far as love goes, I’ve been giving championship effort and championship love for my entire career. I would say that’s the reason I get to go do this is because I’ve had that outlook on myself and just in the training room since day one.”

That learning process bore highlight-worthy fruit in the last year.

After he suffered his first UFC loss to Aljamain Sterling at UFC 250, Sandhagen shifted his mentality and almost immediately produced jaw-dropping results. In his first main event a few months later, Sandhagen knocked out Marlon Moraes with a spinning wheel kick, cementing himself as a true contender. In a somewhat full-circle situation, Sandhagen returns to Abu Dhabi a little more than a year after the fight against Moraes in which he approached the bout with a more aggressive mentality. That’s something he admittedly needed to learn, and tapping into it now is second-nature to him.

The next time out, he put Frankie Edgar to sleep with one of the cleanest flying knees you’ll ever see just 28 seconds into the fight. That set him up against Dillashaw, a fight some still believe he won. Although he seems to have accepted the reality of the loss, he also is appreciative of the sentiment from fans and peers alike around the result that generated plenty of excitement when he stepped into this title fight. 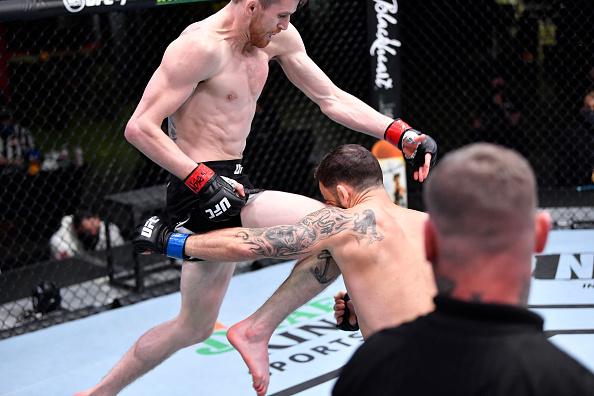 Cory Sandhagen lands a flying knee to knock out Frankie Edgar in their bantamweight fight during the UFC Fight Night event at UFC APEX on February 06, 2021 in Las Vegas, Nevada. (Photo by Chris Unger/Zuffa LLC)

“The recognition is something that I never stress myself about because I knew it was going to come in time,” Sandhagen said. “Some people get really cool knockouts early in their career, they become famous, a lot of eyes get on them really early, and then for other people, it happens later. For me, it happened a few fights in, but that’s something I never lost any sleep over because I knew and I know how good I am, and I really believe, as long as I stay working hard and I stay consistent, the truth will always be revealed, and I really do believe I’m the best.”

Independent of the high-stakes nature of the fight, Sandhagen versus Yan is a fight fan’s dream. The two are technically savvy, entertaining fighters who come into the fight on good form despite both coming off losses. Yan and Sandhagen rank third and fourth in strikes landed per minute in bantamweight history, respectively, and Sandhagen believes they are two of the best strikers in the entire promotion.

Sandhagen is particularly complimentary of Yan’s killer mentality, which seems to come naturally to the Russian and is something he needed some time to learn.

“I think me and Yan, we see some of this stuff the same,” Sandhagen said. “I think that he goes in there to try to take people’s heads off, and I go in there and try to take people’s heads off too. It’s not really this, ‘Let’s play by these rules’ type of things. When we touch gloves, we’re going to fight each other, and we’re going to simulate taking each other out as best as we can, and I definitely think that he does that just like I do that also.”

As thoughtful a fighter as any on the roster, Sandhagen believes what he learned against Dillashaw is going to benefit him greatly. Most prominently is in understanding the scoring aspect of it all. Although he enjoys the war-like aspect of mixed martial arts, he took away a greater understanding of the rules of the sport in terms of how judges look at things.

Of course, between he and Yan, it might not matter what the judges see. 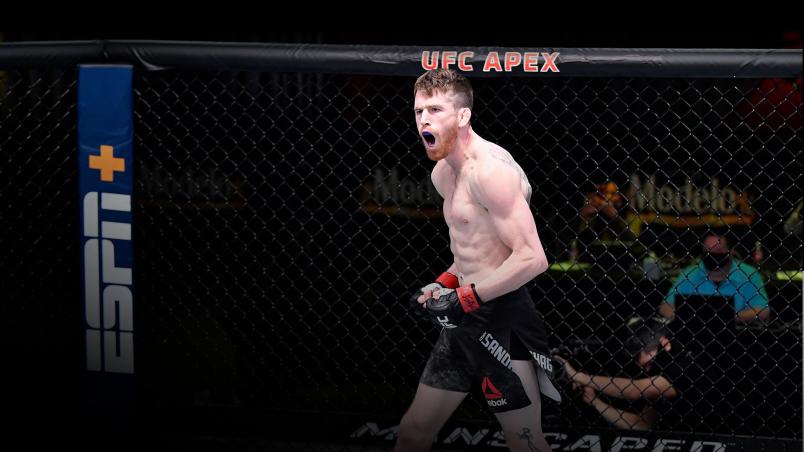 Cory Sandhagen reacts after his knockout victory over Frankie Edgar in their bantamweight fight during the UFC Fight Night event at UFC APEX on February 06, 2021 in Las Vegas, Nevada. (Photo by Chris Unger/Zuffa LLC)

Regardless of approach, October 30 represents a day on which Sandhagen can get his hands on the belt in perhaps the most competitive division in the sport. It’s hard to find a time in UFC history where bantamweight was more entertaining at a higher level. Because of the nature of Yan’s loss to Sterling, Sandhagen has said this feels likes a fight for the undisputed title, and he wants a chance to rectify his loss to Sterling anyway. Beating Yan achieves that, and having a belt wrapped around his waist makes it all the sweeter.

More than anything in Sandhagen’s mind, it’s a chance to accomplish what he set out to do when he first walked into the gym as a lanky 16-year-old in Colorado. Although bringing the belt home to Colorado and celebrating with his team are surely exciting ideas, nothing is more so than doing it for himself.

“I want to hold it (the belt) myself,” Sandhagen said. “I always try to look back and think about: What would 16, 17-year-old Cory, who first started this sport, who was running sprints on the track field on all the holidays while his friends were out partying in college, who was in the gym lifting or he was at jiu jitsu practice or whatever – I want that dude to be really proud, and I think as selfish as it might sound, I want this thing for myself.”