It should’ve been a breakout moment, but instead, the boos rained down after Cory Sandhagen came away with a split decision win over John Lineker at UFC Fort Lauderdale.

“That doesn’t feel very good,” Sandhagen said in his Octagon interview. “But okay.”

Sandhagen’s disappointment in the crowd’s reaction was evident in the moment, and later, he said his main concern rested in whether he might’ve earned a win when he really didn’t deserve one.

“The only reason that upset me is because I was like, ‘Man, did I actually lose this fight?’” Sandhagen told UFC.com. “And then I was upset. I was like, ‘Man, did I win the fight? Did I win, or did I lose? I thought that I was winning.’ And then when I watched the fight, I kind of made the decision for myself, like, ‘Yeah, I played out the game plan perfectly, and as far as fighting Lineker goes, it doesn’t get too much better than that anyway,’ so I was happy with myself after that, after watching it. Before, I was just upset because I thought that I actually lost.”

His methodical and tactical performance against a powerful and experienced opponent validated some of the buzz surrounding him heading into the fight. That win, in his eyes, showed he is a guy who can “actually fight” and is only focused on chasing UFC gold. Now, he has a major opportunity to jump into the top five of a crowded bantamweight division when he takes on Rafael Assuncao at UFC 241.

At just 27 years old, Sandhagen carries himself with the calm confidence of someone who doesn’t have anything to prove. He says his relaxed vibe is something that “isn’t a hard thing” for him, especially before it’s actually fight night. That relaxation has only increased in his last few fights – he’s currently 4-0 in the UFC – and he believes he has found “his flow.”

Even so, he’s aware of the fact that life only gets harder from here.

“I’m not at the point anymore where I’m just going out and doing my thing anymore,” he said. “The guys are very good. I would say the margins of being technically better in each category of MMA than a person in the top 10 aren’t going to be that great. It’s going to be more about maximizing your advantages, and in this weight division, I have a lot of advantages.”

Where Sandhagen particularly enjoys the journey of a young and growing mixed martial artist is in the mental aspect of the sport, an area he said he likes to “indulge.” 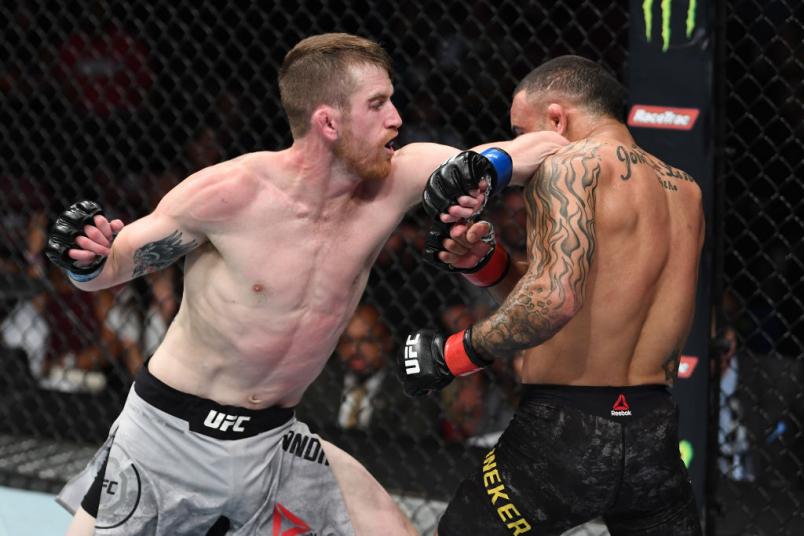 Cory Sandhagen elbows John Lineker of Brazil in their bantamweight bout during the UFC Fight Night event at BB&T Center on April 27, 2019 in Sunrise, Florida. (Photo by Jeff Bottari/Zuffa LLC)

“With each fight, you kind of have to ask yourself new things and face different egos and different demons that are inside of there because the voices start to get a little bit louder the closer you get to the top,” Sandhagen said. “You start to figure things out about yourself, and one of my favorite parts of martial arts is that I can’t really see any other path in life that’s going to make you face your ego as much as getting in a cage in front of millions of people and then having to fight another human being in front of you that’s trained to fight.”

The Colorado native said he spent plenty of time meditating on what his mental battles might be when he faces Assuncao, but ultimately he won’t necessarily know what he’s facing until he makes the walk to the Octagon. Sometimes, an intense fight camp leads to a calm walk to the Octagon. Other times, it’s the complete opposite, but Sandhagen’s ability to steer his mindset in the right direction has led him to join an entertaining and log-jammed list of bantamweight contenders.

Whether fans agreed with the decision in his last fight or not, what is certain is that Sandhagen made the leap from prospect to contender, and the amount of time he spends working on his mental approach to fighting is paying off in all the right ways. What stands now is a fighter with plenty of reassurance that he’s on the right path, one that isn’t a surprise, but rather validation of the work put in so far.

When he struts to the Octagon on August 17, it’s unclear where his headspace will wander, but what is certain is that he’s prepared to manage whatever comes his way and ready to execute what needs to be done on fight night.

The fight represents a chance to, as Sandhagen puts it, put him “in that next tier of competitor” to further him along his chase toward glory. He’s quick to say that he is trying to not put too much more weight onto the fight than already exists, but admits it is a “tricky balance.” Ultimately, though, he takes heart in the fact that he is in a good spot in his career and in his life, and that gives him strength as he approaches the biggest fight of his life.

“I’m going to be myself,” Sandhagen said. “It’s a lot of internal battling, but that’s fun for me. That’s part of becoming the individual who you’re supposed to be, and that’s one of my favorite parts of the fight game.”