Cory Sandhagen Feels in Control of His Intensity

Admittedly, Cory Sandhagen has mixed feelings being back in the same Las Vegas hotel as he was before his loss to Aljamain Sterling at UFC 250.

“Being here is a little bit strange,” Sandhagen told UFC.com. “I’m glad I’m on the other side of the building because it’s almost like being at an ex’s house or ex’s parent’s house. It was a place where I was really sad, and just remembering that it’s a different day; it’s not that day anymore. The energy of all fight weeks is pretty much the same, but I want to create better memories in this hotel that I’ve had to be in quarantine for, for almost two weeks now.”

Watch Sandhagen In The Co-Main Event On ESPN+

The 28-year-old admitted he wasn’t in the right headspace leading into that fight and dedicated himself to making sure that didn’t happen again. He was successful in that venture, scoring an impressive knockout win over Marlon Moraes via spinning wheel kick on Fight Island a few months later to re-cement his place at the top of the bantamweight division. 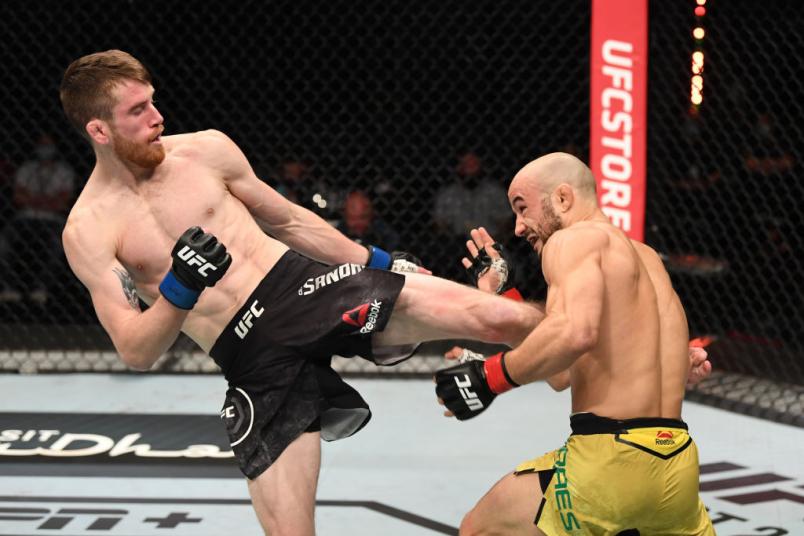 After the fight, Sandhagen wasn’t particularly sure how to describe that mental state, but with some time to reflect on all that led up to that performance, he was able to articulate and replicate it as he trained for his upcoming fight against Frankie Edgar.

“I told my body we were going in there and we were either surviving or we weren’t surviving, and my body reacted well to it,” he said. “My mind reacted to it well. I plan on doing it again. I’ve been practicing still, the exact same way. Every time we’re sparring it’s getting into that state, whether I’m exhausted, whether I’m sick, injured, whatever it may be, I put myself in that place, and I do that twice a week, so that when it’s fight day, I can have no doubts that I’m able to bring that back, and I plan on doing that this time, too.”

He and Edgar were booked to fight more than a year ago in Raleigh, North Carolina, as Edgar’s bantamweight debut, but that was scrapped when “The Answer” stepped in on short notice to fight Chan Sung Jung in Busan. Edgar’s knockout loss delayed his trip down to 135 pounds until August, when he earned a hard-fought split decision win over Pedro Munhoz. Sandhagen said he was “super impressed” by Edgar’s performance in that fight. He isn’t buying the oddsmakers making him a sizeable favorite over the former lightweight champion, saying “Frankie is still Frankie” in his mind.

Fighting someone with Edgar’s resume is a particular reality on which Sandhagen is keen. He previously described his fight with John Lineker as his “welcome to the UFC” moment, and against Edgar, he’s aware of similar thoughts coming to the forefront.

“There is a difference in my mind that’s happening,” he said. “I think the most important thing is just the guy is really good. He’s proven time and time again that he’s really good, and then just remembering and coming back to that I’m really good too, and that I’m here as well, and although he has a lot more accolades and a lot more bigger fights and a lot bigger resume than I do, you build your resume by beating guys like that. It is a little bit harder to be confident fighting someone like Frankie if I’m being completely honest, but when you go in there, you’re in the right headspace, then it’s just about who’s the better fighter, and I think that I’m that guy.”

He added that he’s glad that the fight is happening more than a year from their original booking because of the improvements he’s made in his grappling. The coronavirus pandemic forced gyms and fighters to be more selective with their training sessions, and Sandhagen feels like the mat time put in with Elevation Fight Team and High Altitude Martial Arts has made him a “way, way better grappler.”

With the bantamweight title up for grabs at UFC 258 when Petr Yan makes his first defense against Sterling, this fight figures to have a lot to say about who challenges for the belt next. Edgar has expressed his belief that a finish over Sandhagen earns him a shot at the title, and Sandhagen feels similarly, adding that becoming the first man to submit Edgar is appealing to him.

“If the opportunity is given to me, I would really like to do that,” he said. “At the end of the day, I only care about winning. As long as I get my hand raised, I could care less. The statement that I want to make is I want to beat Frankie. I want to, if I can, submit him.”

"You build your resume by beating guys like [Frankie Edgar]." - @Cors_Life discusses his #UFCVegas18 bantamweight showdown with Edgar 🔊⬆️

The high-pressure nature of the fight game is something Sandhagen puts a lot of thought and time into, and it’s why he spends the energy getting himself into the right frame of mind when sparring. It’s a practice he feels cautiously confident in, understanding he’s accomplished it before a fight just once, but believes the time spent honing that skill has him on a path toward the title.

That path is a little more crowded than other divisions, but this fight provides the perfect opportunity to jockey for the No. 1 contender spot. Sandhagen mentioned former champion TJ Dillashaw as a fight he’d consider if he gets past Edgar, given Dillashaw’s pedigree and impending return from a two-year suspension, but he’s not overlooking Edgar in any aspect. In terms of the fight, the goals remain the same for the young contender.