Cortney Casey not looking for the easy route to UFC gold 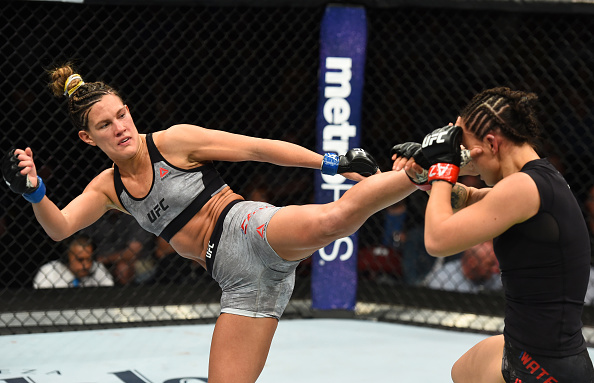 “I’m alive. I’m happy, I’m healthy, my family’s good and I get to do what I love. And just being a good influence and a positive influence on the martial arts community, especially the younger generation, that’s what means the most for me.”

The question was a tough one for the No. 11-ranked strawweight contender, who faces No. 14-ranked Angela Hill this Saturday in Lincoln, Nebraska, as I wondered how she keeps positive over the course of a UFC career where her 3-5 record may be the most deceptive in the game.

“I haven’t had the best of luck since I’ve gotten to the UFC,” said Casey in the understatement of the year. But she remains positive, knowing that while the judges haven’t been kind to her, particularly in recent split decision losses to Michelle Waterson and Felice Herrig, she’s still here, still on the main card, and still fighting top level opposition.

“I haven’t asked for any easy things since getting into the UFC,” said Casey, a member of the roster since 2015. “I’ve dealt with a lot of controversy, a lot of stuff in and out of the cage, and I keep going. I’m just happy that I keep getting fights and keep getting big names. That’s how I look at it. Bad things are gonna happen no matter how positive you are. You can’t control the outcome of everything; you can just control your perspective on it. So I just look at everything as a learning experience and a life lesson, and I just keep going.”

If you wanted to make the statement that Casey is the best fighter in the UFC with a 3-5 record, I wouldn’t argue with you. Just one look at her performances make it abundantly clear that she’s a tough out for anyone at 115 pounds. But those performances haven’t translated to wins, with the losses to Waterson and Herrig particularly stinging her.

The MMA world has been paying attention too, with the website MMADecisions.com polling several media members and coming up with a 16-1 verdict for Casey over Waterson and deadlocking at 8-8-1 for the Herrig fight. Social media has gotten involved as well.

“After the Waterson fight, someone posted a compilation of all the athletes that commented about the fight and put it in a YouTube video,” Casey said. “There are people saying that I won the fight and how they need to change judging and things like that. It definitely opened the eyes of a lot of people.” 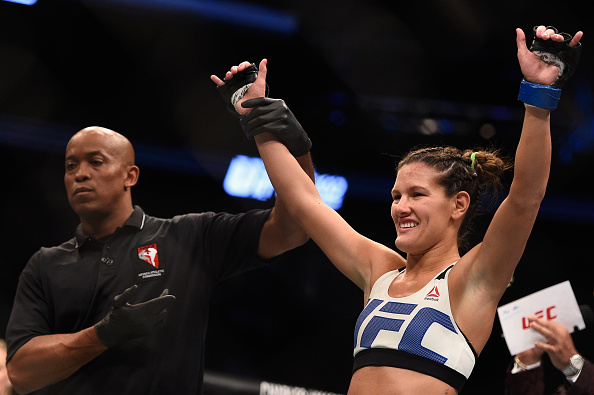 That’s a consolation of sorts for Casey, who isn’t one for moral victories. But if the fights keep coming, she embraces the opportunity to take matters out of the judges’ hands. And with her coaches at the MMA Lab in Arizona chipping in, they believe a few tweaks here and there can make the difference between victory and defeat.

“We do go back and analyze a little bit,” she said. “I have a tendency to win real big moments in the beginning of the rounds and then there will be a lull in the fight – not on my end, but on their end – and then they’ll come back with something here and there and that takes the judges’ eyes away from what I did in the beginning. So we’re trying to win more moments in the round and trying to make a little bit more of an impact.”

In Casey’s eyes, the past is the past (until we bring it up in interviews), and all that matters is what happens now. Yet while her rollercoaster ride is easily explainable to those who follow the fight game, it’s not so easy to get it across to those family and friends who only see five UFC losses.

“It’s really hard to explain,” Casey admits. “The only variable I can’t control are the judges, and that’s why you try to keep it out of the hands of the judges as much as possible. But sometimes it doesn’t go that way and it goes to them and you just have to hope. With me, I kind of look at it as their names weigh heavier than mine do. If you look at a card and you see Felice Herrig and Michelle Waterson, and you see my name next to it, they don’t know who I am. And I do think people’s names weigh a lot heavier in the judges’ eyes. It sucks, but that’s fighting. I really don’t know how to explain it other than that. I also say I won the fight and they won the game. And that’s how it goes.”

Despite the bad luck, Cortney Casey isn’t done in the UFC. Not by a longshot. And it would not surprise anyone that with the right fights and a lucky break here and there, she could be in the title race by this time next year. She likes the idea of that, and in the meantime, she will just keep showing up, mouthpiece in, gloves high, ready to scrap.

“I’ve worked really hard,” she said. “I’m never trying to ask for easy fights, I’m not trying to just get wins and get the money. At the end of the day, the money doesn’t matter. Knowing that I fought the best of the best does. And that’s how I’ve always been. I just want to go and prove to myself that I can be the best. I think I can beat anyone in the world and that’s my goal. I don’t want an easy way to it – I want the quickest way and sometimes the quickest way is going through the fire. And guns a blazin’ I’m going through the fire.”