Cortney Casey Just Happy To Have A Fight

Cortney Casey was prepared to sign her name on the contract against whoever the opponent is.
By Thomas Gerbasi, on Twitter: @TGerbasi • May. 15, 2020

“Considering all this going on, it's nice to have a fight,” said Cortney Casey, who makes her first appearance of 2020 in Jacksonville on Saturday night when she faces Mara Romero Borella.

Casey may be referring to the COVID-19 pandemic, the reality of modified training camps, or more accurately, it’s likely the fact that after getting turned down for fights this weekend, she finally got a willing dance partner in Borella.

“At this point, I literally would have taken anyone,” she said, recalling that she told UFC matchmakers, “Look, I'm gonna say yes to everyone so just give me a contract with whoever's name.”

She laughs, but it was frustrating to get her hopes up only to have them dashed just as fast.

“I'm happy that someone took the fight,” she said. “That's what I was most worried about under these circumstances, that someone wasn't gonna take a fight, even though it was six weeks and still a full camp for people.”

But no one is usually volunteering to face the Arizonan, whose 8-7 pro record is the most deceptive in all of mixed martial arts. Simply put, Casey can fight with the best of them, she’s been on the wrong side of more than a couple bad decisions, and if an opponent signs to meet her, they’re going to be in a scrap. You might say it’s a compliment that some don’t want to fight her.

“I guess,” Casey laughs. “I don't know why people say no. Apparently this girl does want to fight me.” 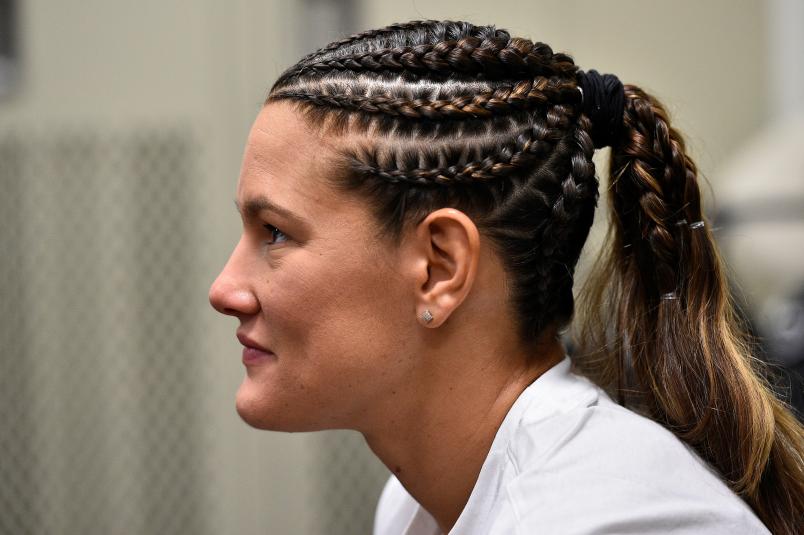 RELATED: Fight by Fight Preview | 5 Things To Know About Overeem | Fighters On The Rise

Which is a good thing for the 33-year-old, who will be in with an opponent who also has a deceiving UFC slate, setting the stage for an interesting bout.

The main thing for Casey is just to fight after a year spent dealing with a shoulder injured in the first round of her February 2019 loss to Cynthia Calvillo and a leg broken twice (yes, twice). As for the move to flyweight for this one, Casey says that it may be a one-off or a permanent home, depending on how everything goes on fight night.

“I had a couple injuries I had been dealing with and we didn't want to battle a weight cut with still recovering from injuries and things like that, so we just decided the move to 125 would be best for right now,” she said. “We'll see how I like it, feel it out a little bit and if it's something I like, then I'll stick to it. If not, I don't mind fighting at 115 either.”

So she won’t make a decision on the spot should she feel good at 125 in the Octagon?

“I think right now, a win is what I'm really looking for,” she said. “I don't care what weight class it's at. I really need to get another win under my belt and then we'll make a decision from there.”

Sounds like that 15 month wait has been a long one.

“Trust me, it feels that long,” she laughs.

At least the wait is over. And with a fresh start in a new division in a new year, Casey is hoping to finally put it all together for the world to see.

“My record's not the best, but if you look on paper, I've been fighting the top fighters and they all have a lot of experience,” she said. “So I think getting back in there and really showing everyone that I belong there is the main thing. I've never been finished, all my losses have gone to a decision and some of them I should have won and some fights I should have took advantage of opportunities, but I just missed them. But I think that comes with a lot of experience. I do have ten fights in the UFC, but those girls had 15-20 fights outside the UFC. So, I definitely think my time's coming.