Cortney Casey is hoping to string together back-to-back victories when she enters the Octagon this Saturday at Fight Night
By Zac Pacleb, on Twitter: @ZacPacleb • Jun. 17, 2020

All things considered, lockdown life was going pretty well for Cortney Casey in mid-May. She was fresh off a first-round submission of Mara Romero Borello in her first fight in 15 months, and she was home celebrating as one does – with lots of food.

In particular, it was Taco Tuesday and Casey also had some sweets on the way.

“I was literally about to eat, and my sister had just got me these gourmet cookies and everything,” Casey told UFC.com. “We just opened them, and I got the phone call. I had to cut the cookie into fours and only eat one little piece of it.”

The tacos and cookies can wait, though, as Casey says she is eager to fight for the second time in a little more than a month. The long, injury-induced layoff had Casey in need of another bout anyway, and so she agreed to match up with up-and-coming Canadian flyweight Gillian Robertson. It’s Casey’s second consecutive flyweight bout, but she maintained her desire to go up-and-down between strawweight and 125 pounds, depending on the timing of the fight.

On top of an easier weight cut, training for a second bout during the coronavirus pandemic made for a smoother ride than the first go-round, when lots of problems needed solving.

“We kinda had a little system set up already,” Casey said. “It was a little bit easier not having to deal with trying to figure things out, plus with Arizona reopening, obviously with restrictions and stuff, it’s been a little bit easier.”

Working out of Siege MMA in Peoria, Arizona, as well as her garage, Casey said things have gone relatively smoothly in terms of preparing for the matchup. Robertson’s reputation lends itself to a grappling-heavy attack with frequent submission attempts. Add in a 25-foot cage, and Casey is expecting Robertson to live up to that notoriety. 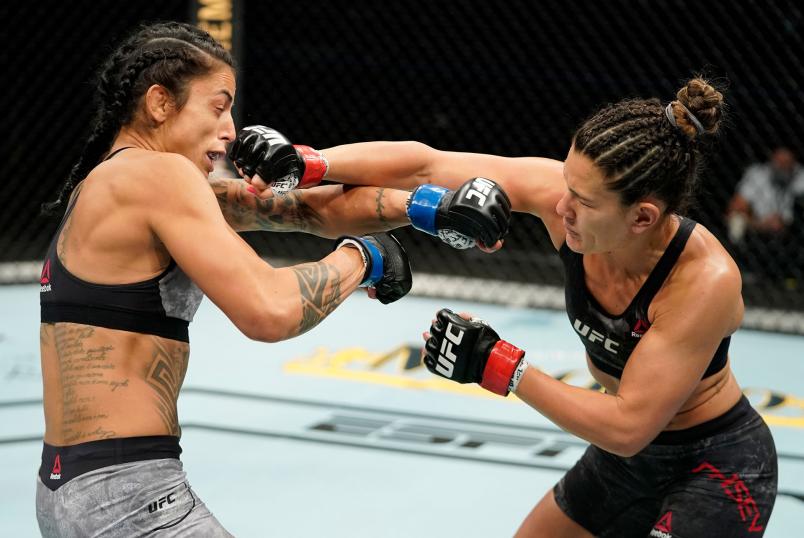 JACKSONVILLE, FLORIDA - MAY 16: Cortney Casey prepares to fight Mara Romero Borella of Italy in their flyweight fight during the UFC Fight Night event at VyStar Veterans Memorial Arena on May 16, 2020 in Jacksonville, Florida. (Photo by Cooper Neill/Zuffa LLC via Getty Images)

JACKSONVILLE, FLORIDA - MAY 16: Cortney Casey prepares to fight Mara Romero Borella of Italy in their flyweight fight during the UFC Fight Night event at VyStar Veterans Memorial Arena on May 16, 2020 in Jacksonville, Florida. (Photo by Cooper Neill/Zuffa

“The smaller cage favors the grappler a little bit,” Casey said. “But, in my eyes, it could favor a striker as well. It just depends on where the fight goes. There’s a lot less room to run, but it’s the same thing for a jiu-jitsu person. If they can’t get you down, there’s a lot less room for them to run too. It can work in either favor, but I think 90 percent of the time it works in the jiu-jitsu, ground person’s favor. But we prepared for it.”

It wasn’t long ago that Robertson was climbing the flyweight rankings, and so the matchup provides a good litmus test for Casey in terms of where she might live in the division’s wide-open landscape. While Casey isn’t looking at Robertson as a gatekeeper, she does believe this is a fight that lends itself to gaining real momentum.

Casey noted she isn’t looking to waste much more time, so if the fights come at strawweight or flyweight, she’s game. The 33-year-old expressed her hopes to have kids “within the next couple of years,” so establishing herself in the flyweight division could make life a little easier for her afterward.

Regardless, Casey is in the rare group of fighters set to compete twice during the coronavirus pandemic, and it could prove to be a critical point in her career as she reestablishes herself as one of the more well-rounded, dangerous athletes in either division.

Should things go her way on June 20, she isn’t opposed to taking a third fight sooner rather than later, but she would like to enjoy the chance to indulge a little bit and also try her hand at making some bread, which she has put off while training. But, before that, Casey is laser-focused on the task in front of her and thrilled at what opportunities could be presented.

“I’m just excited to go in there and put on a show for everyone,” Casey said. “I think everywhere the fight goes, it’s going to be exciting.”