Cortez Embracing Every Part Of Her Journey

“As much as I know this is just the beginning and I have so much more work to do, I’ve learned to embrace every part of my journey because I’m never getting this moment again,” she said.
By Thomas Gerbasi • Aug. 26, 2019

Early in her Contender Series bout against Mariya Agapova, it looked like Tracy Cortez might have a tough time notching her sixth professional victory.

That feeling didn’t last long, and soon, the Mexican-American flyweight began pressuring Agapova and pushing the pace, controlling where the fight took place. At the end of three rounds, Cortez had the clear victory.

“It’s in me,” she said. “I’ve always had that grit. Even in sparring, they would tell me, ‘Man, you’re like a bull, you keep coming forward.’ But that’s just my style of fighting. I’m just in your face.”

That’s a badge of honor for a Mexican fighter, and Cortez wears it proudly. That alone makes her a compelling figure in the MMA world. But as she was officially welcomed to the big show by UFC President Dana White on July 30, it was her backstory that truly captivated, as viewers learned of her battling through the loss of her mother and oldest brother to cancer on the way to Las Vegas and a win in the biggest fight of her career.

Needless to say, it was an emotional moment, not just for Cortez, but for anyone watching the event. And in the lead-up to the fight and in its aftermath, the 25-year-old has bravely recounted the worst moments of her life for anyone who asked. That may be tougher than 15 minutes in the Octagon.

“It’s hard for me to talk about it and not cry,” she said. “There are times that I think about it and I’m a big baby. But there’s more to the story. I’ll open up when I’m ready to share and I haven’t told my full story. I’m not ready for it, but when I am ready, I’ll let my story be known. But as of right now, I have a big portrait of my mom and my brother, so people wonder, ‘Hey, what is that?’ And I have to explain it, but there’s more to the story. There’s more than, ‘Oh, my mom passed away with cancer.’ There’s a story behind it, and when I’m ready, I’ll share it.”

Cortez’ road from Phoenix to the UFC is a reminder that in most cases, fighters aren’t made, they’re born, and from the start, she was determined to keep up with her brothers, even if they weren’t having it.

“There were so many athletes around me and I was just not it,” she said. “I wanted to, but my brothers never let me train with the guys. That was unheard of, especially in wrestling. They would drag me out of the wrestling room, so as much as I wanted to do it, I only got to be in the sport for a short time when I was younger.”

She would be back but, in the meantime, she was your typical kid in a typical Mexican household. In other words, Cortez wasn’t going to be able to run wild like most her age. There were parents and brothers to deal with.

“Growing up, being very, very Mexican and very traditional, they didn’t let me have no friends over,” she said. “I wasn’t even allowed to pass my front lawn and I wasn’t able to have a cell phone. I had to get a job without my parents knowing, and that’s where my independence comes from. They didn’t allow me and I said, ‘You know what, I’m gonna work and get my own things in.’ So I went and got a job, I got myself my first little Cricket phone, and I thought I was it. My dad found out and he took it away in minutes.”

Cortez laughs, and while it wasn’t easy for the family, her parents’ hard work and sacrifice made life seem a lot better than it might have appeared from the outside.

“My mom, with my oldest brother Jose, she used to sell corn from one of those pushcarts,” she recalls. “But I didn’t know that was struggle; I thought that was normal. I thought having beans and rice for breakfast, lunch and dinner was fine – it’s normal. So personally, I was very close-minded. I thought that’s just the way of living. Now that I got older, I appreciate my life, I appreciate where I’m at, I appreciate how hard my mom and dad worked for us to not really notice that we were poor. I’m very grateful for not being fully aware. I was just a little girl hanging out with all these boys. I have three big brothers, and all they brought over was guys, and I wanted to be an athlete. I didn’t really focus on the poverty and how my parents were struggling to bring the next meal to the table.”

By 2017, Cortez had made her wish come true. She wasn’t just an athlete. She was a professional prizefighter. And while it obviously took hard work and talent to get there, it also took the intestinal fortitude to deal with the haymakers life threw at her. In 2011, her oldest brother Jose, a fighter himself who was coming off a 2008 win over Drew Fickett, passed away. In 2016, cancer also took her mother. Their fight fueled Cortez, and it still does to this day. 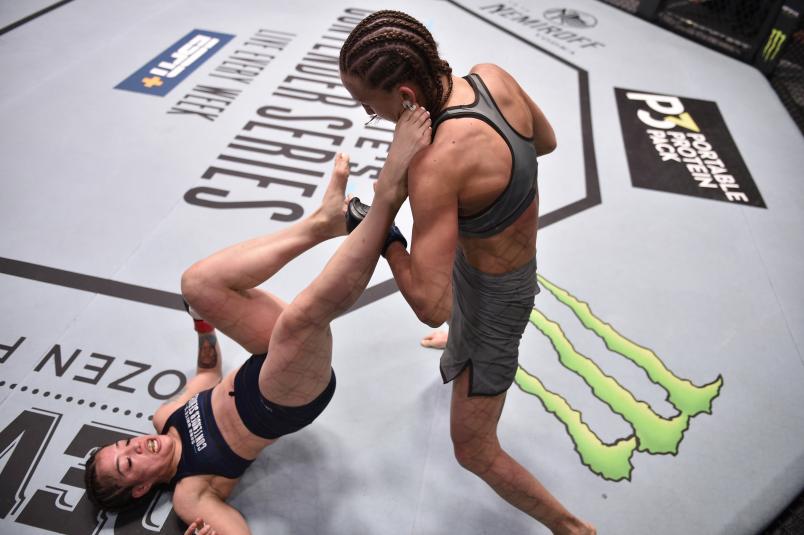 “I’ve been through a lot,” she said. “I sacrificed my whole youth to be where I’m at right now. If you ask my brothers and my friends and people around me, I don’t really party, I don’t really ever go out. I’m very strict and hard on myself, and the reason behind that is my mom. I’ve seen her work until the last days of her life just to give me a good future. And I’ll be damned if I take that away from her. She wanted me to have a good future and I’m gonna bust my ass to make sure I get it. She believed in me and my coaches believed in me and what a shame it would be for me to not try my best when everyone sees my potential. I’ve worked, I’ve had several jobs, I’ve trained, at 24 I had my own house and my own vehicle. I’m just very driven and that’s because life is just too short. I don’t wake up wishing it was a Friday or a Saturday. I’m just so grateful that I’m able to train and I’m grateful that I’m alive.”

Cortez has already established a life that would make her mother and brother proud. And it’s not over yet. In fact, with her UFC contract in hand, it’s just beginning. But that doesn’t mean Cortez is zooming forward without taking time to smell the roses.

“As much as I know this is just the beginning and I have so much more work to do, I’ve learned to embrace every part of my journey because I’m never getting this moment again,” she said. “So I’ve really been enjoying it and I’ve been happy. My whole family at Fight Ready, the whole gym, is congratulating me. I get beautiful messages from people around the world and I’m really enjoying it. But again, I know that this is the beginning, and I know that when I make my UFC debut, that’s when people are really gonna know who I am.”