Before Derrick Lewis takes his heavyweight title shot in Madison Square Garden on November 3, he walked into the Toyota Center in Houston to take a different kind of shot. Before the Houston Rockets played the Los Angeles Clippers, Lewis took the First Shot of the game.
In the first episode of UFC 230 Embedded, Lewis’ trainer, Bob Perez, talked about his fighter and his singular focus heading into his bout with two-division champion Daniel Cormier.
Order UFC 230 here!
“I think it’s Derrick’s time, man,” Perez said. “I basically just asked him, ‘Hey, man. All B.S. aside, all the media stuff aside, how are you feeling?’ And he looked me dead in the eyes and said, ‘I’m knocking him the f*** out.’”
The general consensus is Lewis will need to finish Cormier to win the belt as Cormier is the more technical fighter and wrestler. That said, the current heavyweight champion is not looking past Lewis, who is 9-1 in his last 10 fights.
“There’s no fear in Derrick Lewis,” Cormier said. “It doesn’t matter who I am. I think, sometimes, those guys are the most dangerous because they really have nothing to fear. 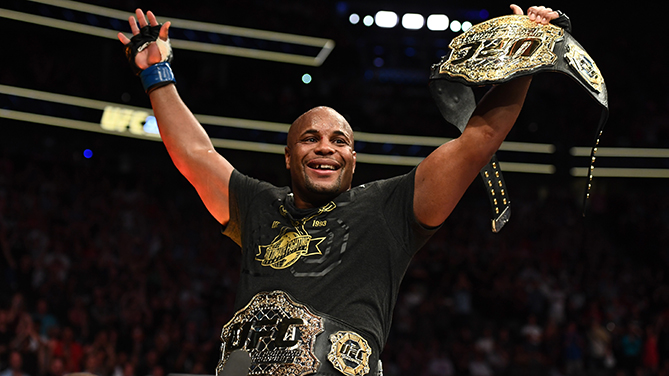 Looking at the matchup, it makes sense that Cormier is a big favorite to defend his heavyweight belt. He is only the second two-division champion in UFC history, and he took the heavyweight crown in impressive fashion, knocking out longtime champ Stipe Miocic in the first round of their “Superfight.”
Even with all of Cormier’s credentials inside the Octagon and as an Olympic-level wrestler, he knows it only takes one punch to change a fight, and few fighters pack as much into that one punch as The Black Beast.
“Derrick doesn’t understand that nine times out of 10, I’m supposed to win this fight,” Cormier said. “And that makes it scary because he’ll go out there guns blazing.”