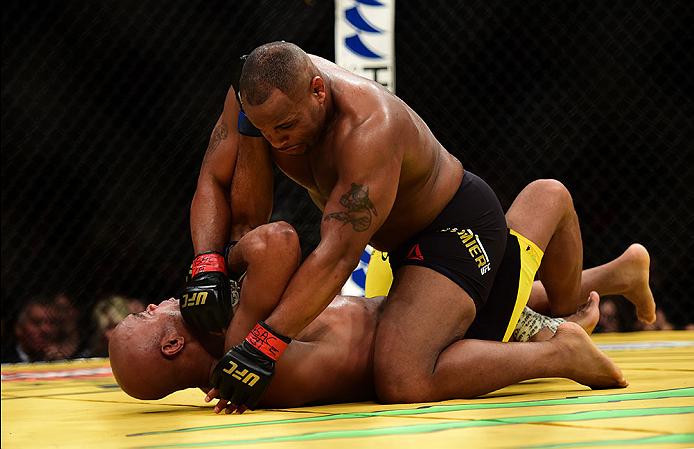 In a lot of ways, UFC light heavyweight champion Daniel Cormier was in a no win situation Saturday night at T-Mobile Arena when he faced middleweight icon Anderson Silva, who took their UFC 200 fight on two days’ notice following the removal of Jon Jones due to a potential Anti-Doping violation. Cormier did secure the three-round unanimous decision victory in the non-title bout though, even if the 41-year-old Silva won the crowd with his gutsy effort.

“I was little nervous, he was so good, so I did what I had to do,” Cormier said.

Scores were 30-26 on all three judges’ scorecards.

Silva circled the Octagon as the bout commenced, initially eluding Cormier, but yielding the takedown with less than a minute gone. Cormier worked his ground-and-pound attack effectively, landing strikes as he pushed Silva against the cage. Silva tried to stall long enough to get a restart, but Cormier remained busy enough to avoid returning to his feet, wrapping up a dominant round.

Coming out aggressively to start round two, Silva drew roars from the crowd, but those cheers turned to boos for Cormier as the Louisiana native scored another takedown. Again, Cormier dominated, but with 1:35 remaining, referee John McCarthy restarted the action. Silva was clearly winded, but there was still some bounce in his step as he tried to make something happen. Cormier smiled as he traded with Silva, who ended the round smothered against the fence.

A fight broke out in the first 30 seconds of the final round, with the crowd clearly in the corner of Silva as he fired off punches, elbows and kicks at Cormier, who fired right back until he put “The Spider” on his back again. In the second half of the round, a chant of “Stand them up” rose up, and with less than two minutes left, McCarthy agreed, giving Silva one more chance at pulling off the upset. And with 30 seconds left, a kick to the midsection nearly did it, as Cormier was clearly hurt by the shot. “DC” tied Silva up though, ending the fight locked up against the fence.

With the win, Cormier improves to 18-1; Curitiba’s Silva, who is now winless since he defeated Stephan Bonnar in October of 2012, falls to 33-8 with 1 NC.