Already set to battle each other in a highly anticipated UFC 206 showdown, the stakes are now even higher for featherweight contenders Max Holloway and Anthony Pettis on Dec. 10, as the winner of their bout, which is now a five-round main event, will leave Air Canada Centre in Toronto, Ontario, Canada as the interim UFC featherweight champion. 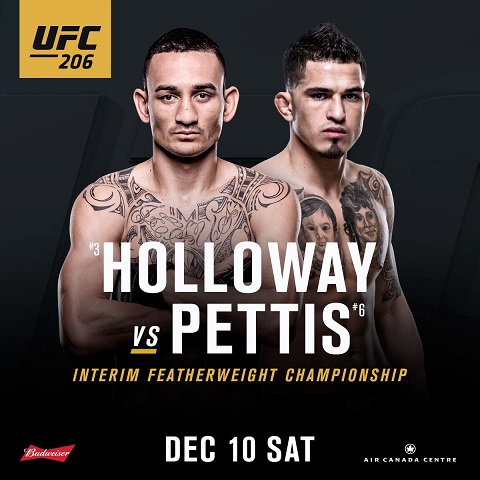 The UFC announced the new main event on Saturday, also revealing that Jose Aldo is the promotion’s new undisputed featherweight champion after two-division titleholder Conor McGregor relinquished the 145-pound belt and decided to focus on the title he holds in the 155-pound lightweight division.

The winner of Holloway vs. Pettis will face Aldo in 2017. The new main event bout replaces the UFC light heavyweight championship bout between Daniel Cormier and Anthony “Rumble” Johnson, which was scrapped when Cormier was forced to withdraw from the rematch on Friday due to injury. Johnson, the number one contender for the 205-pound title, will not receive a replacement opponent for UFC 206.

Currently sporting an incredible nine-fight winning streak that includes wins over Ricardo Lamas, Cub Swanson and Jeremy Stephens, the 24-year-old Holloway has been tearing through the division in search of a title, and on Dec. 10, the No. 3-ranked Waianae native will get his opportunity to become Hawaii’s first UFC champion since Hall of Famer BJ Penn.

Standing in his way is the No. 6-ranked Pettis, another young man in search of a history-making performance, as the former UFC / WEC lightweight champion will attempt to become only the fourth fighter (joining McGregor, Penn and Randy Couture) to win UFC titles in two weight classes. And after a third-round finish of Charles Oliveira in his 145-pound debut in August, Milwaukee’s “Showtime” has all the momentum he needs to secure another defining win.

Tickets for UFC 206, which airs live on Pay-Per-View, are on sale now.
Save