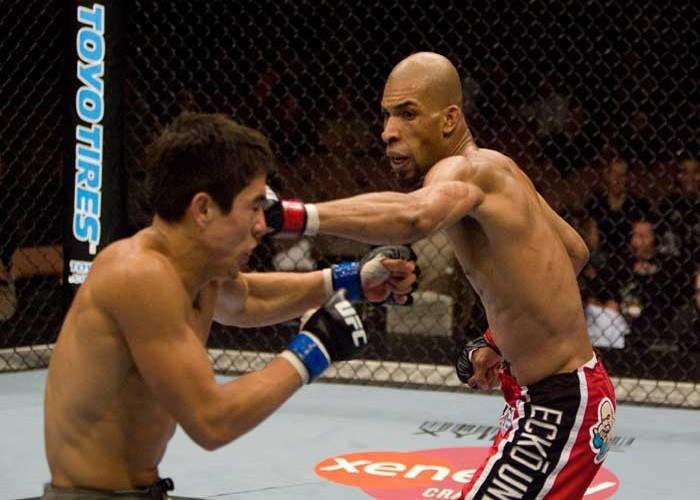 The record doesn’t matter. Whether it’s Corey Hill or anyone, why should it? How can you put a life into the context of wins, losses or other numbers when they don’t take into consideration family, friends, and the impact someone has had beyond what he did for a living.

So when talking about former UFC lightweight Corey Hill, who tragically passed away on Friday, May 15, at the age of 36 due to complications from pneumonia, remember the family man, the husband, the father, the friend first.

“He was just a lovely guy,” Hill’s former coach, UFC Hall of Famer Pat Miletich, said. “He was intense when he had to be, he always had a smile when I’d see him, and he was the kind of guy - and this is not because he passed away or because I liked him so much – who literally lit up any room that he was in. He was a ball of energy and I loved seeing his face and seeing him smile. When I was calling fights for AXS TV and he’d show up at an event, just seeing him and hanging out and talking, I’d love being around him. So it’s rough. He was so young.”

From my end, I’ll remember the guy I had to chase through Iowa to get his UFC bio form done via phone because he didn’t have a computer, and smiling about it every step of the way (later, not then). And the thing is, in dealing with pro athletes, the capture, so to speak, is often not worth the chase. But tracking Hill down was always greeted with an upbeat attitude, plenty of great stories, and just as many laughs.

That’s what will stick with me about West Virginia native Hill, a junior college National Champion wrestler at Colby Community College who was the rawest of raw talents when he stepped into The Ultimate Fighter house for season five in 2007. Six-foot-four and seemingly all arms and legs, Hill was able to hang with perhaps the greatest collection of talent ever assembled for the reality show, including Nate Diaz, Joe Lauzon, Gray Maynard, Matt Wiman, Cole Miller and Manny Gamburyan, an amazing feat considering that he lied about his previous pro experience to get into the competition.

“Obviously I falsified my record a little bit, but other than that, I wouldn’t say I fooled anybody,” Hill laughed when we spoke after the show finished taping in 2007. “I went down there with the rest of those 700 guys (for the TUF5 tryouts), I stood in line like everybody else, and I think (UFC President) Dana (White) saw something in me being 6-foot-4 – you don’t see too many 6-4 lightweights out there. Plus, I had a pretty solid wrestling background, being a national junior college champion and runner-up, so I kinda had a ground game, I just didn’t know what to do with it. (Laughs)  But I knew that alone wasn’t gonna get me on there and that they wanted someone with a little more experience, and that’s where the record falsification came in.  I talked to Dana and that was the first time that I met him – I didn’t even know who he was – and he said ‘what’s your record’ and I’m like ‘8-0.’  I don’t know why but that number just popped in my head.  It was one of those things where the moment I said it, I was like ‘why did you say that?’  I knew I had no way to back it up or prove it.”

Hill won his first bout, decisioning Rob Emerson, before losing in the quarterfinals to Diaz.

“I’ve always been an athlete, I’ve always competed and a lot of what you saw was me being nervous,” he said.  “Once I realized that some of the guys on the show had more experience than me, I was a little nervous and a little scared, and something went off inside of me that said ‘these guys are a little more experienced and a little more knowledgeable than you, so just go out there and give ‘em hell and let the chips fall where they may.’”

Hill didn’t win the season, but once it was over, he was seen as a fighter with the potential to do big things in the Octagon, with none other than the legendary Miletich saying that if stayed on the right path, he would wear a title belt around his waist one day.

“Pat Miletich is a great guy, and he’s one of the people that really gave me confidence,” Hill told me in 2007. “He puts pressure on me by saying ‘with your ability and your talent, we expect this from you,’ but I look at it as a positive thing and as a motivational tool.  I’m the type of guy who says ‘put the pressure on me and I’ll run with it.’”

What Miletich saw wasn’t just athletic talent and the willingness to work hard, but the attitude every fighter should have.

“If you treated Corey with kindness and respected him, he’d do the same for you, but if you crossed him, he’d fight anybody,” Miletich said. “He’d fight Godzilla.”

Hill won his first UFC bout, stopping Joe Veres in two rounds in January of 2008. He lost his second via submission to Justin Buchholz at UFC 86 in July of that year, but he was confident that a December bout against Dale Hartt was going to turn things around. To get to that point, he even made the risky move of leaving the MFS Elite team to train in Florida, simply because, to him, his family was going to have a better life there, and family was always first.

“I cried my eyes out like a 16-year old high school girl who just got dumped,” Hill said of the move from Iowa to Florida.  “To have someone like Pat Miletich put so much faith and so much confidence in my ability just makes you so confident as a fighter, and to leave there, I was in tears.  But when I weighed the fighting career versus the family, it doesn’t compare.  I’m a father first, a husband second, and a fighter third. It was hard, and I doubted myself a bit about making the move, but I sat down with Pat and talked to him about it, and he said ‘at the end of the day, when you’re 50 years old and I’m gonna be long and forgotten about, your family is still gonna be there.’  And once he said that, I just took it and ran with it.  I miss those guys like crazy, but my wife’s smiling again, my kids are jumping around, and I’m still getting the proper training.  Like I tell people, hard work is hard work, no matter where you put it in at.”

Hill was favored to beat Hartt that night in North Carolina, but in the second round he threw a kick, Hartt checked it, and in a precursor to the injury suffered by Anderson Silva against Chris Weidman in 2013, Hill’s leg broke. At Octagonside, we all watched as Hill went to the mat and Hartt followed, wondering why the referee immediately stopped the fight. Then we saw Hill’s leg.

Press row was silent, and in the days before Twitter and Instagram, word traveled fast, but not as fast as it does these days. It was a horrific injury, one you didn’t wish on anyone, but that hit particularly hard when it happened to a good guy like Corey Hill.

No one expected that Hill would ever fight again, despite the doctor’s initial prognosis of a year to 18 months away from the gym, but when I spoke to him as he recovered, not fighting again wasn’t even a thought. He reminded me of something he told me earlier in his UFC career about not quitting. He even told me to look it up. I found it.

“I feel it’s my job to tell everyone, follow your dreams, no matter what.  My dad used to tell me, you only truly fail when you quit.  Once you quit, then you’ve lost.  As long as you keep trying, you never truly fail.  That’s the attitude I have and the attitude I’m gonna die with.”

Corey Hill fought again, returning in January of 2010 with a win over Jason Trzewieczynski. He wasn’t part of the UFC roster anymore, but he was still going to pursue his dreams. Ten more fights followed, even one against Jose Caceres in February of this year, and while his final record reads 6-9, that means nothing, because to his wife and three children, other family members and his friends, he was a champion in life.

You can’t put a number on that.

Corey Hill is survived by his wife Lauran and their three children, Corey Jr., Seytia and Keynan. A memorial fund has been set up to aid the Hill family. Donations may be sent to the following address: