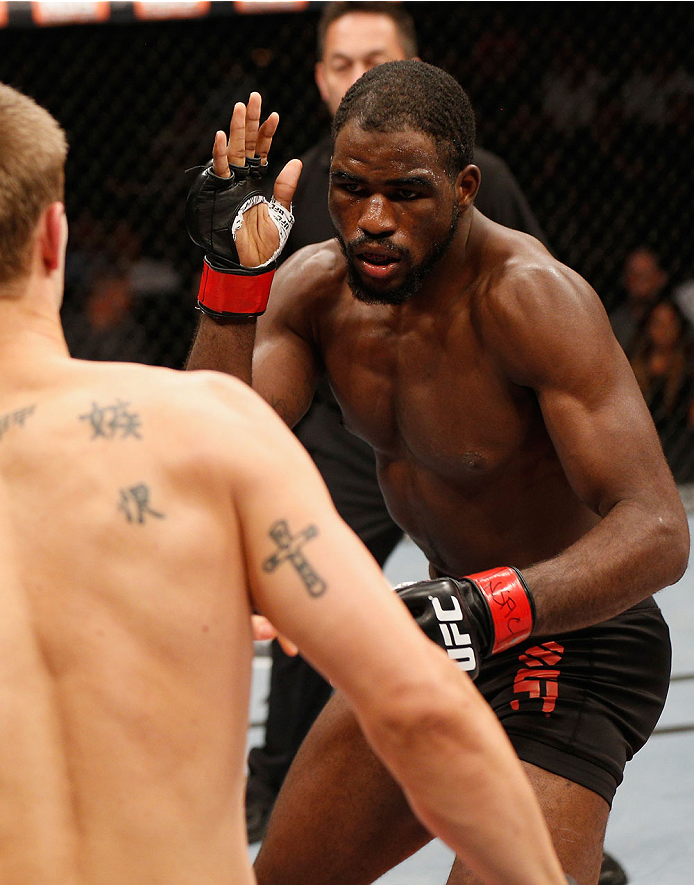 Undefeated light heavyweight Corey Anderson (6-0) has been “Beastin 25/8” since he was in the third grade, when he started a wrestling journey that has led to a fight career in the Ultimate Fighting Championship’s light heavyweight division.

When he faces Gian Villante on April 18th at Newark, NJ’s Prudential Center, the world will get to witness the hardworking TUF 19 winner whose nickname declares that “24/7 just doesn’t cut it.”

That’s also why the Rockton, Illinois-based Anderson picked up and moved to New Jersey, where former lightweight champion Frankie Edgar leads a team that is primarily known for a work ethic that impresses even someone who says he goes hard 25 hours a day, 8 days a week.

“It’s a whole different level; just look at Frankie and that speaks volumes for itself,” Anderson says of training full-time with his TUF 19 coaching staff.

“Frankie’s pound-for-pound the best in the sport no matter what people say,” says Anderson. “He’s been the champion at 155 pounds and he will be the champion at 145 pounds. We have coaches but the pace is set by Frankie. He’s the one pushing the pace. Everyone wants to keep up with Frankie; and even me being a lot bigger than him, when we’re doing strength and conditioning I’m trying to keep up. I want to move whatever weight he’s moving. It’s great.”

Anderson has never been one to require extra motivation. An NCAA Division III finalist at the University of Wisconsin Whitewater, the business administration degree holder is in constant motion. Even when he’s just sitting in the hot tub, he’s studying fights on UFC FIGHT PASS on his iPad.

“I study Frankie’s fights even more than my own or my opponents,” he said. “But putting what I watch into my repertoire is hard work, and that’s what I’m here to do.”

The prospect lived in Edgar’s father-in-law’s attic, got rides to practice from the former champ nearly every day, and was unofficially adopted by Ricardo Almeida and boxing coach Mark Henry since Day One of training camp.

“Coach Mark Henry saw that I was a fast learner, and he made an announcement to the team and said ‘I am going to work with this kid all the way up to his fight.’ We just clicked, and I started relearning how to box the minute I met him,” he said. “He’s texting me right now telling me to get off the phone and get back to work.”

Long Island, New York’s Villante is a tough-as-nails opponent who was forced to postpone an earlier scheduled fight with Anderson due to injury, and in fact before that first fight was announced the two soft-spoken gentlemen had planned to train together.

“I have no hard feelings for Gian, and I hung out with him and (middleweight champion) Chris Weidman after the TUF finale and we had planned to train together, but then I got the call saying I would be fighting him so don’t make that trip,” Anderson said. “I haven’t talked to him since the fight was announced but I don’t think he’s got any hard feelings for me. We are both Renzo Gracie affiliates and that’s family, but this is our job. You do what you gotta do.”

When Corey speaks of his job, he becomes animated and excited. He’s a student of the fight game, and as a wrestling coach himself, he understands how to break down a matchup and is always coming up with ways to better his skillset.

But it’s the competition that fuels him most. He’s obsessed with winning, and getting punched in the face for a living doesn’t even come into the picture once he steps inside the Octagon.

“When I go out there my feelings get numb,” he says. “I get out there and something comes over me, and with Frankie and my coaches in my corner, I also feel like I’m fighting for them. They deserve the win as much as I do, and I’m working, working, working.