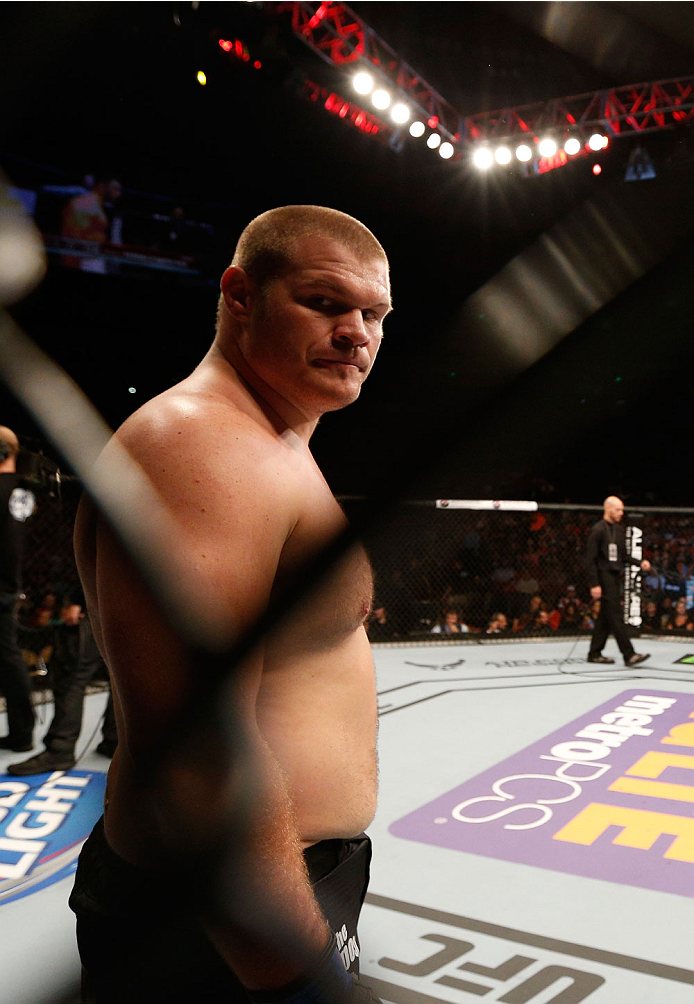 Soft-spoken and beyond deferential to his opponents, UFC heavyweight Josh Copeland couldn’t have a more fitting nickname than “Cuddly Bear.”

In fact, you can expect a big smile on his cherubic face when he greets his friend and future training partner Jared Rosholt inside the Octagon at UFC 183 in Dallas’ American Airlines Center on Saturday night.

“It would be huge to get my first win in the UFC,” he said. “It’s a dream to be here, but it’s hard to stay here. I don’t plan on getting this far in MMA and losing a couple of fights and getting cut. That’s not what I want for me and my family. But that’s what sucks about fighting Jared. It’s a win-win and a lose-lose, because my plan is to train with him at Team Takedown. If Jared wins I’m going to be happy for him but sad for me, and if I win I’m going to feel bad that he had to lose to me but happy that I get my first W in the UFC. But this is our job and we have to do what we have to do.”

Copeland, a stocky, shorter guy in the weight class, has excellent boxing as a result of his training with renowned striking coach Trevor Wittman in Colorado. The former RFA heavyweight champion made his UFC debut against Ruslan Magomedov and dropped a unanimous decision, but looks at the lone loss on his record as a valuable learning experience.

“Ruslan is good,” he said. “He’s going to win a lot of fights in the UFC. His style is going to be tough for a lot of guys to deal with. I am a counter striker. Just being shorter for my weight class, I like to draw guys in and lead them into big shots. But Ruslan is a tall, long and skinny fighter. He’s quick and he wanted me to come at him and I wanted him to come at me. It’s all a learning process, but looking at it, I should have worked more on my footwork and attacking from angles instead of coming straight in. So even though it’s a loss, I learned.”

Copeland has trained with Rosholt in the past (and he plans to train with him full-time after this fight), so he knows how good the All-American wrestler from Oklahoma State University is on the ground.

That’s why he was happy when TUF 10 alum and Division II national champion wrestler Jon Madsen moved to Colorado seven months ago and started training with him.

“Having him here has helped out a lot,” he said. “I’m trying to learn as much as I can from him and getting a few tricks up my sleeve for Jared.”

In preparation for Rosholt’s noted wrestling skills, Copeland has dropped about twenty pounds since his last fight and has focused on his footwork.

“I don’t want to be flat-footed and standing in front of Jared,” he says. “I need to attack from angles and avoid the takedown. Losing weight has helped a lot because I’m lighter and quicker now. I know he’s got decent stand-up just from training with him, but I’ve improved a lot and I’ve seen my development as a fighter. I used to lose to Pat Barry or Todd Duffee in training this aspect or that aspect, so then seeing me win those exchanges later on in training, it’s a good feeling to know that I am getting better and better.”

Copeland is well aware that in the heavyweight division, anyone is one punch away from a loss or a victory. That’s the dichotomy of being a UFC heavyweight. On one hand, training to be a complete mixed martial artist is key to success in this game, but on the other, training to land that one punch could be good enough. There’s a balance to being a heavyweight.

“You’ve got to be well-rounded,” he said. “I started training jiu-jitsu with Travis Lutter and I’ve gotten to work with some great UFC fighters throughout my journey, but any one of us can end a fight with one punch. It’s hard not to get caught up in that mindset. When I fought Ruslan I knew that the fight could change with one punch but also, running out of time has taught me a few lessons there as well.”

“Cuddly Bear” doesn’t have a mean bone in his body, which might be counter-intuitive for some MMA fans to comprehend, but the father of 20-month-old Aiden says it’s just his style.

“I’m looking to be a role model for my son,” he says. “I think everyone’s personality is different. I can be your friend before a fight and be your friend afterwards. I go in and fight as competition. I don’t have a chip on my shoulder or have to hate a guy to fight. Man, I’m just happy and grateful to be here.”