There used to be a contingent that made it their mission to knock combat sports at every turn. It didn’t matter what combat sport it was, but if it involved punching somebody, they would go on about how such an endeavor shouldn’t be allowed.

You don’t hear too much from those folks these days, but when they were in their heyday, I used to ask boxers and mixed martial artists what the sport meant to them and what it did for them. In other words, what would they tell someone who thought their sport should be banned?

I pulled that question out of the archives for Ian Heinisch recently. In July, the 30-year-old Coloradoan earned a UFC contract with a first-round knockout of Justin Sumter on Dana White’s Tuesday Night Contender Series. It wasn’t the end of his MMA journey, but it was the biggest step thus far, and one that came after a harrowing few years in which he served time for his involvement with drug trafficking.

When released from prison, MMA was the lifeline for the former wrestling standout, and it changed everything.

“MMA and finding God really saved my life,” Heinisch said. “I just want to be an inspiration, I want to be the light in a dark world and be a true comeback kid. I’m gonna be champion of the UFC someday, and I just want people to be inspired. I want them to know that whatever situation they’re in or how low they are, even if they’re rock bottom, they can always bounce back from their situation and end up on top if they’re willing to put in the work and the sacrifice that I’ve done and completely change their life. They just need to find their purpose, their why, and the sky’s the limit, no matter what age or what situation.”

“The Hurricane” is living proof. Yet while Heinisch owns one of the most compelling stories in the sport, this is a game that is unforgiving, so if you don’t perform when your name is called, you won’t get to where you want to go. And Heinisch wants to go far, so he’s put in the work to get to the UFC, and in 10 of his first 11 fights, he got the job done. Just don’t call it work. 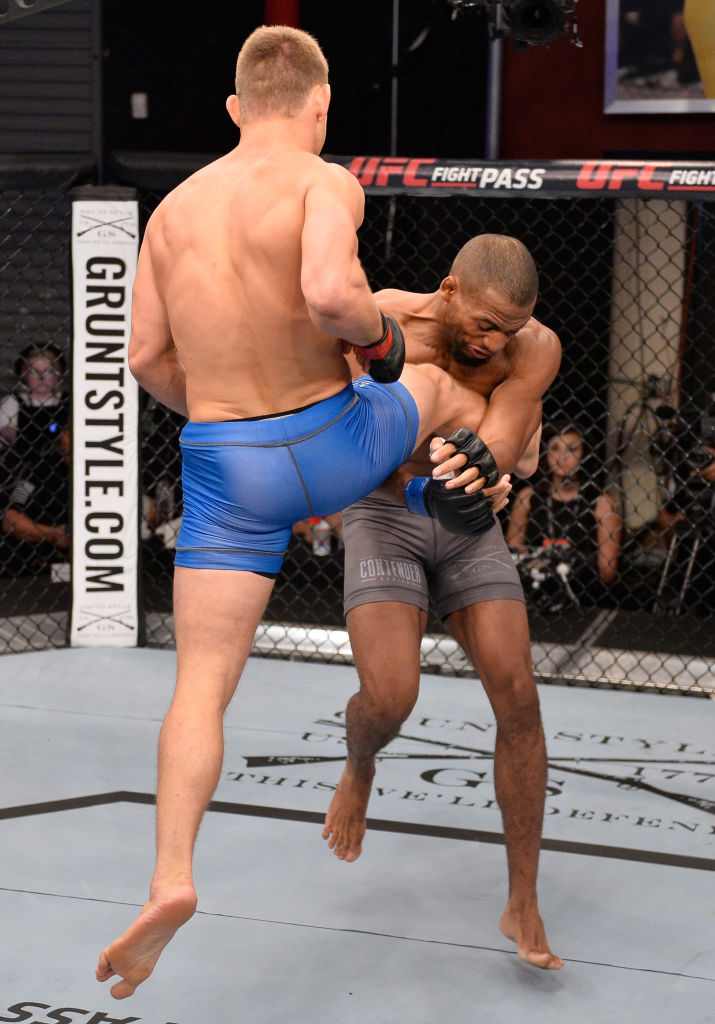 “I love what I do,” he said. “It’s so awesome. I’m definitely living my dream and my purpose and I’m loving every minute of it. And I love fight week. Obviously the weight cut’s never that fun, but I make it a spiritual thing – the fasting and cutting the weight – and I’ve been doing it since I was 11 years old, so it’s nothing new. And then I get to impress myself and impress the world, and I really enjoy that. The training’s the hard part.”

After his 10th pro win, a first-round knockout of Gabriel Checco, many wondered when he would get called up to fight in the UFC. They got their answer when he was placed on the July 31 edition of DWTNCS against Sumter, and while the prospect of being in a fight that can change the trajectory of your career in 15 minutes or less is daunting for most, Heinisch couldn’t have been more at ease.

“If you know your purpose and your reason why you do it, and you put all the training in and everything you can do in your power, then my whole motto is to go in there and have fun,” he said. “You’re gonna be nervous, you’re gonna get those jitters – you have to expect those to come – but you don’t want to be too nervous that it’s going to affect your performance.”

Those nerves were apparently under control in the Heinisch corner, as he took less than four minutes to end Sumter’s evening and then add a backflip for good measure. UFC contract in hand, Heinisch celebrated his 30th birthday six days later, and while most entering their thirties have that little life talk with themselves, you have to assume that Heinisch’s was more interesting than most as he assessed a life that could have been a lot different had he not changed things around.

“I’m happy,” he said. “I’m really excited for my accomplishments and proud of myself, but I’m hungry and I’m ready for more and I’m excited for the 30s and the rest of my life to be the best of my life.”

That means after a little time to unwind, Heinisch is plotting his next move, this one taking place in the middleweight division of the UFC.

“As far as the lower half of the UFC, the entry fights, I feel like I’m on a different level than those guys,” he said. “I let my coach and my manager make the decisions on that, but I feel like I took the long road to get to the UFC and I feel like I’m the King of Contenders. A lot of those guys got in before me and they got in early, and they didn’t have to pay their dues. So I would love to go and smash all those Contender Series middleweights that got into the UFC and prove that, and then onward and upward from there.”