The Continuing Education of Mr. Wonderful

"As I've gotten more confident and been able to settle into my own groove
of my fighting style, I've been more potent in the gym and my overall
game has gotten a lot better." - Phil Davis 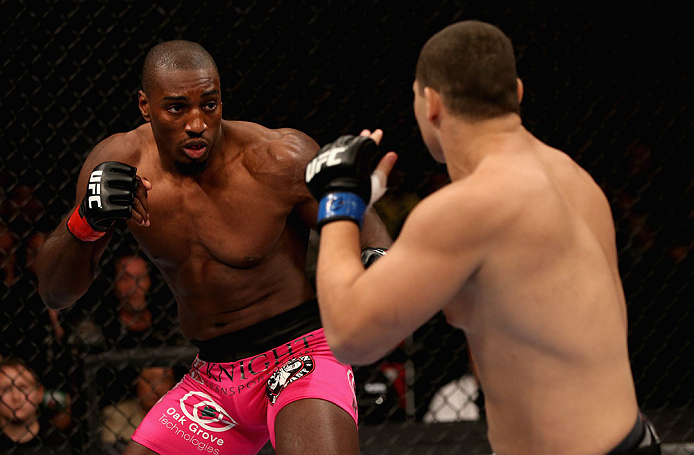 To anyone planning on calling out UFC light heavyweight Phil Davis, do it now. Not in a year, not in a month, and not even in a lowly little week. Shout that challenge from the rooftops today because every minute Davis spends in the gym is making him a greater threat for that eventual meeting in the Octagon. As in the major theme of G.W.F. Hegel’s works and in the lyrics off side one of “Sgt. Pepper's Lonely Hearts Club Band” by The Beatles, “Mr. Wonderful” is getting better all the time.

“For me, it's literally just more time in the gym,” states Davis. “I got beat by [Rashad Evans] on experience and he fought the smarter fight. The more time I spend training in this sport, the more dangerous I'm going to get. That's really just it. From when I fought [Evans] to now, I've gotten so much better. And by the time January comes back around, which is when I fought him, I will be much better then. The most dangerous part of someone fighting me is allowing me to learn more about this whole MMA game.”

A newly minted 28-year-old, Davis is heading into the Octagon for an eighth time in just over two and a half years with the company. The former four-time NCAA Division I All-American wrestler from Penn State University went straight from the college wrestling mats to the cage and rattled off a 4-0 streak in smaller MMA shows. At UFC 109 in February 2010, Davis debuted in the Octagon against former WEC light heavyweight champion Brian Stann and he took the contest by unanimous decision. With little experience to draw on besides his vaunted wrestling acumen, Davis continued to win and win and win and win against top opponents in the UFC and was finally halted by former UFC light heavyweight champion Rashad Evans in a unanimous decision loss at the beginning of this year.

“In some ways, I'm ahead of the curve and in some ways I'm behind,” tells Davis. “Most of my fighting career has been inside the Octagon. Not too many people can say that. Which means, of all the people I've fought, most of them have been top competition. If you go through the guys I've fought, they've all been gamers. I really didn't have the chance to develop like most other fighters have, like getting progressively tougher as they go along. By the time I had my 10th fight, I was going against the former world champion. You have to sink or swim.”

With an overall record of 9-1, 1 NC, Davis is a strong swimmer in the deep, shark infested waters of the 205-pound division. Prior to the Evans loss, he was 5-0 in the Octagon, propelling him to the early title eliminator bout with Evans. Of his wins, two opponents, Tim Boetsch and Stann, dropped to middleweight after their respective losses to Davis, and a new submission hold, the one-armed kimura, was dubbed the “Mr. Wonderful” because “Mr. Wonderful” Davis did it to win at UFC 123. These are not “flashes of greatness” and are instead the foundation of a young great career that Davis is beginning to understand and settle into after a whirlwind few years fighting in the cage.

“Sometimes, I get a little upset at myself because I wish I was a little better at this or that or just had a performance that I didn't like,” explains Davis. “Sometimes, I wish I could do something extravagant in there like Anderson Silva. But I have to say to myself, 'Listen, you've been doing this for two years and you're fighting the best guys in the world. Maybe you should just be cool with winning.' As I've gotten more confident and been able to settle into my own groove of my fighting style, I've been more potent in the gym and my overall game has gotten a lot better. I need to stop being so anxious about getting the highlight reel finish and just take my time and learn my way.”

If there has been a lull in his career, it is easily the strange 88 seconds that played out between Davis and Brazilian bomber Wagner Prado at UFC on FOX in August. Eventually ruled a no contest, Davis and Prado squared off in a “striker vs. grappler” matchup which ended as quickly as it started with an inadvertent eye poke by Davis to Prado. After the cageside doctor looked at Prado’s eye and questioned him on whether he could see, the doctor’s called the fight and Prado was devastated with the way his UFC debut ended. Subsequently, Davis and Prado will have a rematch to the fight that basically never was.

“I knew he was a tough opponent,” admits Davis. “I didn't know much about him, but that usually doesn't stop me from preparing for a tough fight. I leave it to my coaches. They give me a gameplan and I go out there and do my thing. Usually for me, it's pointless watching videos because everybody looks good outside the UFC; if you don't then you don't make it. I prepared a lot for that fight. It just stinks that I didn't get to showcase any of that. I spent a lot of time working on my striking. I've really spent a lot of time working on my overall MMA game. It's not that I've been spending all my time doing one thing; it's really me trying to take my overall game to the next level.”

At UFC 153 at the HSBC Arena in Rio de Janeiro, Brazil, “Mr. Wonderful” and “Caldeirao” will be set to tangle yet again in hopes of a better result. On paper, this is still an excellent fight as Prado is an undefeated wrecking crew with seven of his eight wins coming by KO/TKO. He is a 24-year-old, heavy handed, Team Nogueira prospect who blitzkriegs his opponents with punches and kicks early and often. Nothing has changed as far as talent or game plans in the cage, but the actual cage itself has migrated from the West Coast of the USA to the South-Eastern beaches of Brazil. In the first scrap, Davis had the crowd’s support and in the rematch Prado will have the cheers in his favor.

“Fair is fair,” affirms Davis. “The first time, we fought was in LA, which isn't necessarily my hometown, but it's closer than where Wagner is from. I get it. This time, we're fighting in Rio. It’s not where Wagner's from, but it’s sort of like his hometown. That's as fair as fair can be. You can't ask for more of a fair shake than that. I'm glad to fight in front of the Brazilian fans. They're great fans, they're fanatics about the sport, they like to see good fights, they're educated fight fans, and I would like to give them everything they paid their money for - and then some.”

Traveling is no issue for Davis, as he has gloves and is willing to travel. Most of Davis’ Octagon appearances have been in the Continental US, but he did fly to Abu Dhabi for UFC 112 and took a dominant victory over Alexander Gustafsson with an anaconda choke in the closing seconds of the first round. Even before that, in Davis’ National Championship winning college wrestling days, he competed in China in a friendly tournament against several Chinese National and military teams. More or less, Davis lived out 1989’s “Best of the Best” with wrestling instead of taekwondo, and relishes the opportunity to do it again, whether it’s in China or on an uncolonized planet far far away.

“I will travel anywhere, I will fight anywhere,” asserts Davis. “I kind of wanted to get on the fight card in China because I've been to China before. The Chinese fans are awesome. I've wrestled in China and they treated me awesome. It was an awesome experience. I saw the venue online for the event that is going to be held in China and I was like, 'Damn, that would be awesome to fight there'. But that's neither here nor there, that's no problem. Maybe next time. The point is when I'm healthy, I will fight anywhere, anytime. When they have fights on the Moon one day or Mars, guess what? I will be there! I will be on the first fight card on Mars!”

As mentioned, “getting better” for Davis is simply more time at Alliance Training Center in Chula Vista, California. Also, it’s the home gym to several other UFC superstars like Brandon Vera and UFC bantamweight champion Dominick Cruz. In charge of adapting a terrific wrestler like Davis to become a force on the feet is head trainer Eric Del Fierro and boxing coach Adrian Melendez. On the ground, Davis is in the more than capable hands of third degree Brazilian jiu-jitsu black belt and all around “ninja” Lloyd Irvin. What will propel Davis to continue to be successful in the UFC in the future are a mix of lessons learned from his own wrestling past and the current knowledge given by his Alliance coaches.

“I'd say everything is influenced by my wrestling,” divulges Davis. “I think it should be because there is no reason to start at square one. A lot of people who got started in MMA have no real background in anything. Why put myself on an even playing field with those guys when I have a great background in one thing to draw from? Everything I do comes from my knowledge of wrestling. The attitude of perseverance. I remember when I sucked at wrestling and I got really good. And I remember when I really sucked at MMA and, now, I'm not bad. Everything I feel like I know about sports, I know because of wrestling. That one time I was an underclassman starting in the lineup. I wanted to put big time points on the board just like the other guys. It didn't matter if I was a freshman. Everybody else was like, 'Take your time. You're coming along. Just work your way up. You don't have to compare yourself to these other guys. Your time will come.' Sure enough, my time came. It's just the matter of putting your time in and not trying to rush yourself.”