This week, 10 more fighters will look to impress the boss and the UFC matchmakers to hopefully earn their spot in the promotion, as several top prospects face off in bouts from light heavyweight down to flyweight.

In the featured bout, former Ultimate Fighter season 19 competitor Anton Berzin returns to his old stomping grounds in the TUF gym as he takes on undefeated prospect Kennedy Nzechukwu.

Joby Sanchez will also make his return after picking up a win in the opening week of the Contender Series as he takes on fellow flyweight JP Buys.

With that said, let's take a look at the five matchups taking place on this week's edition of Dana White's Tuesday Night Contender Series.

There has been a plethora of light heavyweight prospects discovered on the Contender Series this season and another could join the list with this featured matchup at 205 pounds.

Berzin first arrived on the scene with the UFC as part of The Ultimate Fighter cast during season 19, when he was on the team coached by Hall of Famer BJ Penn. Berzin made an impressive debut to get into the house with a first-round triangle choke submission, but then came up short in his next bout against Patrick Walsh as he was eliminated from the competition.

Since that time, Berzin has picked up two wins in a row, with a submission and a TKO added to his record as he looks to take another shot at landing a contract with the UFC.

Nzechukwu will try to stop Berzin while making a name for himself in his first appearance in the Contender Series. Nzechkwu is still very young in his mixed martial arts career, with only two fights, but he's been very impressive thus far. Nzechukwu trains out of Fortis MMA in Texas, the gym started by NBA guard Deron Williams, which also serves as the home to Charles Byrd, who just joined the UFC by way of the Contender Series.

This matchup between Berzin and Nzechkwu could produce a ton of fireworks as both fighters try to make an impression.
START YOUR 7-DAY UFC FIGHT PASS FREE TRIAL | CHECK OUT THE DWTNCS FIGHT CARD HERE

Benito Lopez and Steven Peterson will also look to put on a show when they meet in a very interesting matchup at 145 pounds.

Lopez trains out of Team Alpha Male in Sacramento, so he's got a great pedigree coming into his first fight in the DWTNCS. Working daily with fighters like bantamweight champion Cody Garbrandt, as well as former title challenger Chad Mendes, will only serve to help Lopez as he attempts to make a big impact after racking up seven wins in a row to start his MMA career. Lopez has finished his last five fights with a mix of submissions and knockouts, so don't blink when he steps into the Octagon.

Peterson is one of the most experienced fighters to compete on the show this week, with 20 bouts on his resume, including wins in seven out of his past eight fights. Peterson holds a win over UFC veteran Matt Hobar as well as Manny Vazquez, who appeared on the first week of the Contender Series. Peterson is best known for his slick submission game, where he's put away several opponents on the ground, with a rear naked choke being his weapon of choice.

Joby Sanchez will make his second appearance in the Contender Series after picking up a decision win earlier this season, as he welcomes JP Buys to the Octagon in this flyweight battle.

Sanchez earned a solid victory in his last fight, but it wasn't quite enough to get him a contract to return to the UFC. Now Sanchez is back looking to put on a show while also hunting for his fourth win in a row following a brief three-fight stint in the UFC between 2014 and 2015.

Buys will attempt to steal his thunder as this South Africa-born flyweight seeks to build upon his three-fight win streak while also capitalizing on his recent work with Team Alpha Male in Sacramento. Buys comes from a wrestling background, so don't be surprised if he looks to put Sanchez on the mat early and often in this matchup, as he possesses powerful takedowns with a relentless offense on the ground. 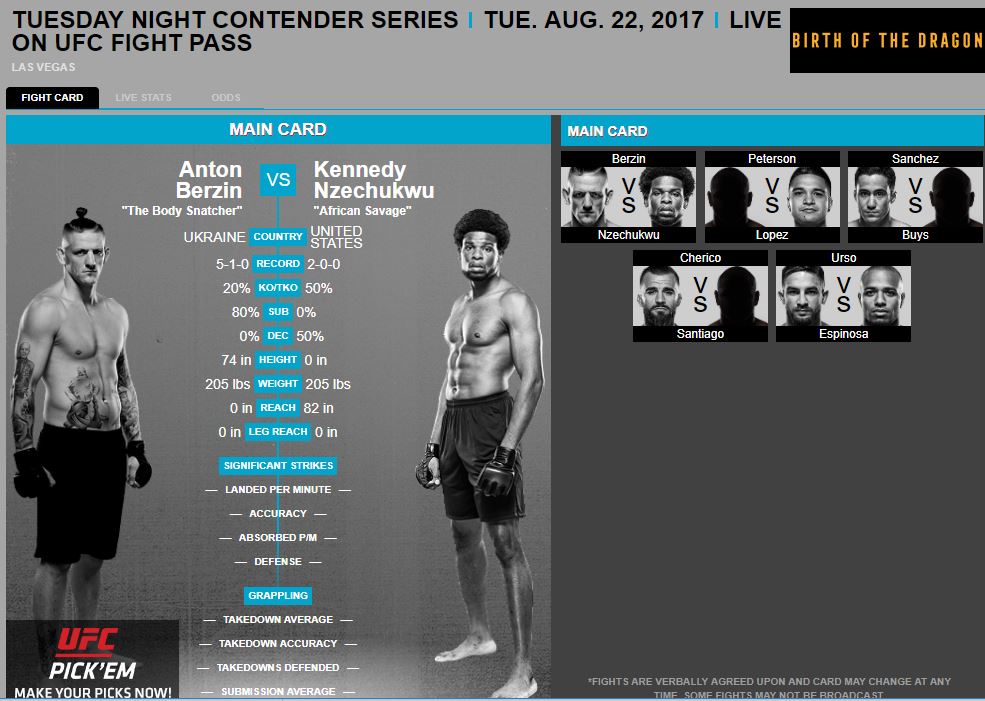 Cherico comes out of Pittsburgh, where he owns and operates his own facility after a chance encounter with a neighbor carrying a bag of fight gear got him interested in training martial arts. Fast forward a few years and Cherico is a 12-fight veteran with numerous performances in Pinnacle FC, a local promotion out of Pennsylvania. Cherico has won his last four fights, and his only career loss came to UFC veteran Brian Kelleher in 2014.

Santiago enters the fight after winning his last eight in a row with several bouts taking place in high profile regional promotions like Ring of Combat and Resurrection Fighting Alliance. Santiago has a very aggressive style inside the cage and he's picked up six submission victories in his last eight wins, with a wide variety of finishes from rear naked chokes to armbars and everything in between.

The flyweights will kick off the card with this matchup between Jordan Espinosa and Nick Urso.

These two fighters actually have history together after first meeting in 2016 in a bout that took place in New Mexico. On that night, the fight was ruled a no contest after Espinosa was unable to continue following a strike to the back of the head. Now the two flyweight prospects will look to clash again with bragging rights and a potential UFC contract on the line.

Espinoza trains under head coach Chris Luttrell, who has recently been working with top-ranked strawweight fighter Claudia Gadelha, while Urso comes from the famed Jackson-Winkeljohn Academy in New Mexico. Luttrell actually cut his teeth under coach Greg Jackson, so this matchup is really a family affair between two of the most well-known gyms in New Mexico. Urso enters the fight with wins in two out of his last three bouts as he looks to settle the score with Espinosa once and for all.