Mike Rodriguez, a fighter coming up under UFC veteran Joe Lauzon, capped off the show with a spectacular flying knee knockout, while Alex Perez had a very impressive performance that ended with a second-round anaconda choke finish, and both were awarded deals with the UFC.

Now in its sixth week, the Contender series will feature the first women's bout of the season, as well as a featured bout pitting two hard-hitting middleweights against each other, as 10 prospects all look to earn a shot at fighting in the UFC.

With that said, let's take a look at the matchups taking place on week six of Dana White's Tuesday Night Contender Series.

Closing out the latest Contender series card will be a middleweight matchup featuring a pair of fighters known for getting highlight reel finishes.

Charles Byrd (8-4) will actually be making his second appearance in the series after first fighting on the debut card, where he picked up a first-round arm triangle choke win over Jamie Pickett. He didn't earn the UFC contract that night, so Byrd is back to take a second shot at catching Dana White's attention as he looks to build on his current resume, where he's won four out of his last five fights, with three of those bouts ending by way of knockout or submission.

Byrd already has one finish on his record from his previous appearance and now he'll look to go 2-0 when he fights on Tuesday.

Randall Wallace (15-6) will look to stop Byrd while coming into the fight with a ton of experience. Throughout his career, Wallace has faced a laundry list of well-known opponents, including UFC veterans Max Griffin and Roan Carneiro. Wallace has most recently amassed an impressive three-fight win streak, with all of those matchups ending by knockout or submission before the third round. Wallace has earned finishes in 13 of his 15 victories, so there's definitely a great chance that this fight won't ever see the judges' scorecards.
START YOUR 7-DAY UFC FIGHT PASS FREE TRIAL | CHECK OUT THE DWTNCS FIGHT CARD HERE

Featherweights Grant Dawson and Adrian Diaz will look to shine when they meet on Tuesday night as they both seek to build on their already outstanding records.

The resume of Dawson (11-1) includes fights from numerous regional promotions, and he recently picked up wins in his last two bouts. Dawson trains out of Glory MMA and Fitness in Missouri, led by UFC lightweight James Krause with a team that includes former Ultimate Fighter winner Tim Elliott, Zak Cummings and former Invicta FC champion Megan Anderson. Dawson comes from a wrestling background with eight submission finishes on his record.

Diaz (11-4-1) comes from Stockton, Calif., best known as the hometown to Nick and Nate Diaz. When it comes to his training, Diaz actually works out of Team Alpha Male in Sacramento, alongside a slew of top ranked UFC fighters including bantamweight champion Cody Garbrandt, as well as learning from recent Hall of Fame inductee Urijah Faber. Diaz has an exciting style that has seen him pick up wins in six of his last seven bouts, including a submission victory over former UFC fighter Cody Gibson.

A couple light heavyweight prospects have already been signed to the UFC from the Contender series, and here's another matchup between two top up and comers at 205 pounds.

Karl Reed (2-0) is still very young in his mixed martial arts career with only two fights on his resume, but he's got a championship pedigree coming out of a well known team in South Carolina. Reed trains under head coach Ray Thompson, who is best known as the trainer and father to two-time welterweight title challenger Stephen "Wonderboy" Thompson. Reed has a well-rounded style with serious knockout power in his hands, so don't blink when he steps into the Octagon.

His opponent, Cameron Olson (7-3, 1 NC), will definitely have the experience edge after transitioning to MMA following a collegiate football career at the University of Iowa. Olson trains out of Roufusport in Milwaukee, where he trains alongside several top fighters, including welterweight champion Tyron Woodley and former lightweight champion Anthony Pettis. Olson has also faced some tough competition during his career, including a bout against recent Contender series victor Julian Marquez and current UFC light heavyweight Khalil Rountree. 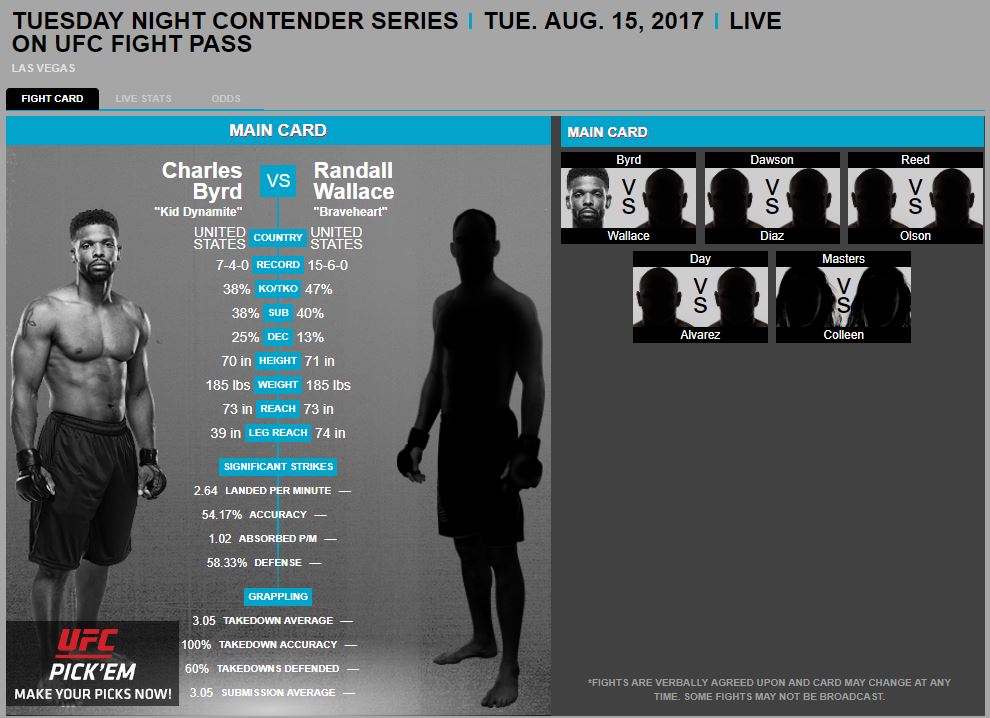 There have been some very exciting flyweight fights thus far on DWTNCS, and now Martin Day and Jaime Alvarez will look to add their names to that list this week.

Day (5-1) fights out of Hawaii, where he works alongside current UFC flyweight standout Louis Smolka. During his career, Day has picked up two submission victories while notching his first knockout with a victory in his most recent fight in June. Day is best known for his striking, so look for him to come gunning for another knockout on Tuesday night.

Alvarez (6-1) is a familiar face after competing on season 24 of The Ultimate Fighter, where he joined the cast seeking to earn a shot at flyweight champion Demetrious Johnson. Alvarez trains out of American Top Team in Florida so he's got plenty of top training partners to get him ready for this fight and he's best known as an explosive finisher with four knockouts to his name.

Tiffany Masters and Jamie Colleen will have the honor of being the first women's fight on DWTNCS, as they meet in a strawweight matchup to kick off the card.

Masters (2-0) only has two wins on her professional record but those fights came after an extensive amateur career where she racked up four victories in six bouts. Masters is a wrestler at heart who will definitely look to take the fight to the ground if the opening is there, and she has no problem applying a nasty submission arsenal once she drags her opponents to the ground. Of course, Masters also has a ton of power at 115 pounds, where she's earned four KOs between her amateur and professional career.

Colleen (3-1) comes into the fight out as a striker out of Philadelphia who now trains at the Renzo Gracie Academy in New York City. Colleen has no fear of tough matchups, best evidenced by a pair of scraps with current UFC strawweight Danielle Taylor, who she defeated by knockout in 2015. Despite being so young in the sport, Colleen already has championship experience as well, with three of her fights being scheduled for five rounds while competing in King of the Cage.