Saturday’s UFC Fight Night: Luque vs Muhammad 2 here in Las Vegas will serve as a showcase for some of last season’s most exciting athletes, as four alumni from the show will make their UFC debuts. In fact, two of them have such a buzz around them that they’ll make their promotional bow in the bright lights of the co-main event.

Fighting Out Of: Paris, France by way of Makhachkala, Russia

The Scoop:  “Week 9, Season 5 of Dana White’s Contender Series saw yet another undefeated Dagestani prospect in Gadzhi Omargadzhiev make a quick and lasting impression,” said DWCS commentator Laura Sanko. “Taking on a Muay Thai striker, he immediately got the fight right where he wanted it: on the ground, dominated in top position. With just a minute left, Omargadzhiev snatched up the very first kneebar finish in the history of Dana White’s Contender Series.

“He’ll be making his UFC debut against another standout from Season 5 in Caio Borralho. Borralho is a tall, rangy, southpaw striker, but does have a BJJ black belt to back it up. So if Omargadzhiev decides to take it to the canvas, he might have some interesting trouble down there. We’ll see how these two middleweights match up. It’s 13-0 vs a 10-fight unbeaten streak.”

Fighting Out Of: Sao Paulo, Brazil

The Scoop: “Season 5 of Dana White’s Contender Series saw Caio Borralho emerge as one of the brightest prospects of the entire season,” says Sanko. “On week five, Caio Borralho turned in a great performance, he got the win, but to many people’s surprise, Dana did not award him a contract. Caio stayed in Vegas, he stayed ready and just three weeks later found himself fighting up a weight class at 205, and turned in an excellent performance this time. In fact, it took less than two minutes this time out to change Dana White’s mind.

Fighting Out Of: Trnava, Slovakia

The Scoop: “Week 5, Season 5 of Dana White’s Contender Series saw Slovakian heavyweight Martin Buday turn in an absolutely dominant performance,” recalls Sanko. “At 6’4”, Buday has to cut weight to make the heavyweight limit, and he made all the use of that frame in that fight against Lorenzo Hood. He put him up against the fence, made him wear his weight. But it wasn’t just control time he was doing there; he was doing a ton of damage, landing elbows, knees, working the body. And with just six seconds left, he landed a flush knee to the head of Lorenzo Hood that put a stamp on that fight.

“There are no easy fights in the UFC, however, and he’s going to be taking on a fan favorite in heavyweight Chris Barnett. He is hot on the heels of a performance that earned him a lot of fans when he turned in one of the craziest wheel kick knockouts we have ever seen in the heavyweight division. Buday is going to have his hands full if he wants to keep that 100% finish rate intact." 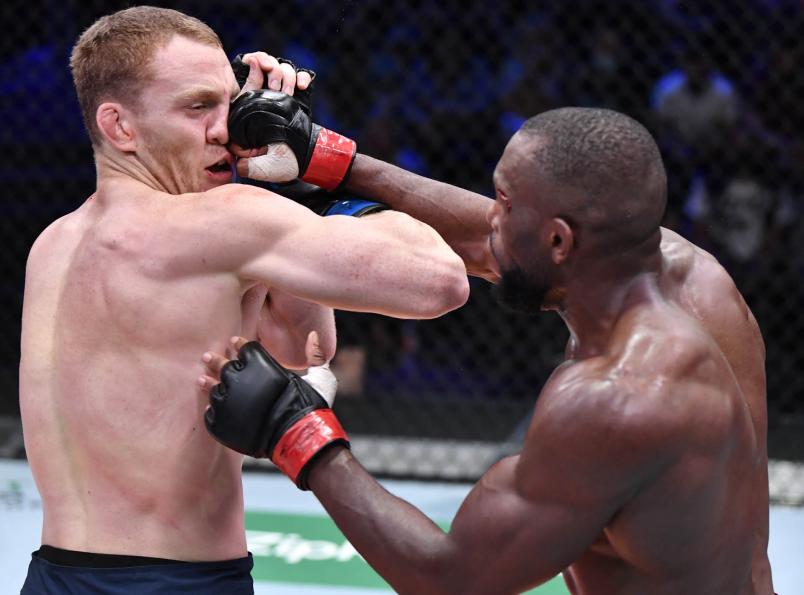 Fighting Out Of: La Chaux-de-Fonds, Switzerland by way of Kinshasa, DR Congo

The Scoop: You don’t necessarily need to win a contract on Dana White’s Contender Series to get the call to the big show, and in the case of fighters like Ange Loosa, you don’t even need to win your DWCS fight. Although he came out on the wrong side of the scorecards to Jack Della Maddalena on Week 3 of Season Five, his toughness was on full display as he became the only fighter that the Australian couldn’t finish on his current 11-fight win streak. As such, it wasn’t a total shock when his phone finally rang.

"I wasn't surprised,” he told UFC.com about that fateful moment. “When I got the call and saw it was my manager calling, I answered and said, 'Is it UFC?' and he said 'Yes, can you make weight in two weeks?' No problem. I train at Sanford MMA, but I was in LA at the time and before I left, I packed my bag and grabbed my mouthpiece and my cup just in case. So I wasn't surprised, because I'm ready."