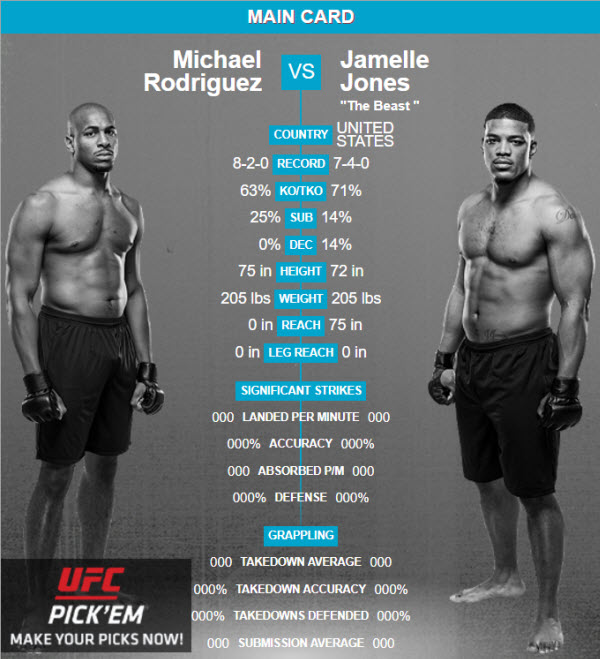 After just four weeks, Dana White’s Tuesday Night Contender Series is making a habit of producing some of the most exciting fights and top prospects in the sport.

Last week, Julian Marquez delivered a Knockout of the Year candidate in the main event as he finished Phillip Hawes with a spectacular head kick to earn a UFC contract while Brandon Davis went to battle for three rounds to earn his spot on the roster as he scored a win over Austin Arnett.

Week 5 of the DWTNCS will see 10 more prospects get the spotlight, headlined by a main event throwdown between two hard-hitting light heavyweights, as Mike Rodriguez takes on Jamelle Jones in a matchup that promises explosive action from start to finish.

With that said, let's see who's fighting this week.

With 14 career finishes between the two of them, Mike Rodriguez and Jamelle Jones aren't likely going to look for a decision in the featured bout taking place at 205 pounds.

Rodriguez (8-2) is a Boston native who trains alongside UFC veteran and multiple-time bonus winner Joe Lauzon at his gym in Massachusetts. Rodriguez is a very heavy-handed striker who has earned knockouts in his past three fights, with all of those victories coming inside the first round. Throughout his career, Rodriguez has been known for devastating finishes and he's only gone to a decision one time in 10 career fights.

Jones (7-4) is an equally experienced fighter who has competed in numerous regional promotions throughout his career. Jones comes from a collegiate wrestling background and has two NJCAA national titles. Jones has put together an impressive record throughout his time spent in mixed martial arts including TKO victories in five of his last seven fights.

Featherweights Julio Arce and Peter Petties will look to impress when they face off this week.

Arce (12-2) is a New York native who trains out of the Tiger Schulmann Academy in Bayside. He comes from a striking background where he's competed in Golden Gloves boxing as well as kickboxing while competing in numerous regional shows, including Ring of Combat, which is a highly respected promotion out of New Jersey.

Petties (5-2, 1 NC) comes out of Maryland where he's put together a very respectable record while competing in several top promotions, including Titan Fighting Championships. Petties has bounced back and forth between wins and losses in his most recent fights, but don't blink when he steps into the Octagon because he's definitely capable of pulling off a highlight reel finish, as evidenced by his vicious head kick knockout over Rodney Jordan last October.

The flyweights will get a chance to step into the spotlight this week with a matchup between Alex Perez and Kevin Gray.

Perez (17-4) is one of the most experienced fighters to earn a slot on the Contender Series after competing in numerous bouts in promotions all around the United States. Perez spends part of his time training at Team Oyama, which is the same gym responsible for flyweight contender Ian McCall, as well as former strawweight champion Carla Esparza. Most recently, Perez has reeled off four straight wins.

Gray (9-3) hails from Nebraska and also boasts an impressive resume while competing in promotions such as Resurrection Fighting Alliance. Gray has faced some tough competition during his career and he holds a win over current UFC flyweight and former Ultimate Fighter competitor Eric Shelton as well.

Veterans Donovan Frelow and Ricky Simon will look to shine in this bantamweight showdown on Tuesday night.

Frelow (6-2) comes to the Contender Series from Las Vegas, and he is a very experienced fighter at 135 pounds who has competed for titles during his career as well. Frelow fought several times in World Series of Fighting, the same promotion responsible for recent UFC transfers Justin Gaethje and Marlon Moraes. Frelow is a submission specialist with four career finishes on the mat, including two wins by armbar and two more by guillotine choke.

Simon (9-1) has won his last two fights while only suffering a single loss during a professional career that started back in 2014. Simon trains out of the Gracie Barra Academy in Portland, where top 15 strawweight Paige VanZant has been spending time since relocating to Oregon. Simon is a tough out for anyone, and he had a slew of knockouts on his record before just recently pulling off his first submission victory in May.

Don't expect the judges to get involved in this heavyweight slugfest between two top prospects, as Everett Sims takes on Shelton Graves.

Sims (4-0) has made an impressive run through the early part of his career with four wins where not a single one of those fights made it out of the first round. Sims trains out of American Top Team, so he's got plenty of heavyweight talent surrounding him, including former champions Junior Dos Santos and Andrei Arlovski. There's a ton of hype around this 28-year old fighter and Sims will look to build on his record when he fights on Tuesday night.

Graves (6-3) will give him everything he can handle, as he is a veteran fighter out of Maryland with a wealth of experience under his belt including four wins in a row as he steps into the contest. Graves is a devastating finisher with knockouts and submissions on his record, but he has pulled off a couple of wins by decision, so he seems more than prepared to go deep into this fight if that's what it takes to get a win.