Consistency Is Key For Jim Miller

One Fight Shy Of 40 Octagon Appearances and A Career Spanning Nearly Two Decades, Jim Miller Has Seen It All, But Consistency In His Life And Training Have Kept Him Level
By McKenzie Pavacich, on Twitter @mpavacich_ • Feb. 18, 2022

When Jim Miller sat down for his fight week interview, I looked him straight in the eyes and asked him what he wanted to talk about.

We don’t usually ask an athlete what the storyline is, but when you have well over a decade's worth of stories having already been told, very little changes from fight to fight, and I figured it would be a nice change of pace from what can certainly become a monotonous fight week task.

Don't Miss Any Of UFC Fight Night: Walker vs Hill

He sat and thought about his answer carefully before ultimately looking back at me and saying, “You know, it’s pretty crazy that I’m still here doing this.” 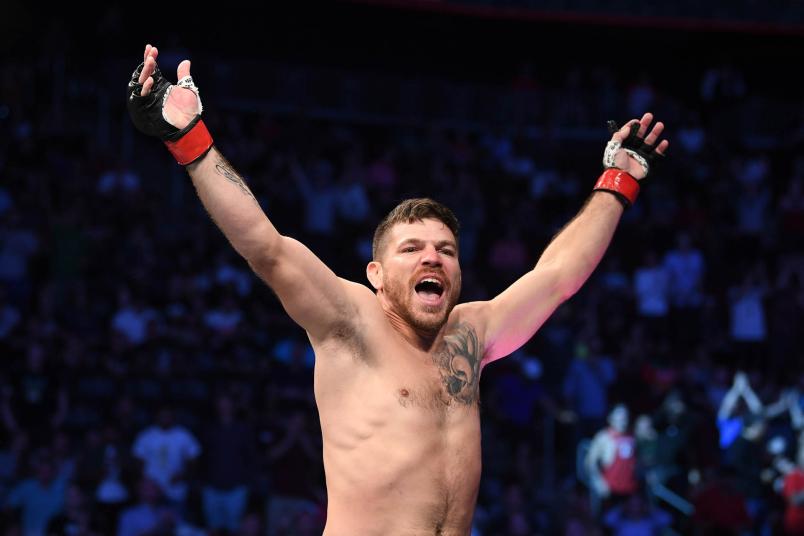 Jim Miller celebrates his submission victory over Clay Guida in their lightweight bout during the UFC Fight Night event at the Prudential Center on August 3, 2019 in Newark, New Jersey. (Photo by Josh Hedges/Zuffa LLC)

“I've trained with plenty of guys through the years that could have fought in the Octagon, it's just either injuries happen or the daily grind got to them,” the 38-year-old said. “We see some problems that come out of some of these mega gyms, right? The stories are always the same, about kind of reckless sparring sessions and stuff like that. But I’ve always focused on consistency.”

Miller was quick to add that there’s nothing wrong with big gyms; in fact, an abundance of training partners early on in your career can be a good thing. But as “A-10” progressed in his career and started noticing little things that might have an impact on his longevity, he quickly came up with solutions.

“In 2014, I opened up my own gym and honestly, I don't think I would still be fighting if I was at a bigger gym. I condensed my team, I made things smaller and I made my group a lot more intimate,” Miller said.

“You have to have a group of people around you that can read you and that you can have honest conversations with; the guys that I have in my corner are all guys that I trust completely. We can be honest with one another about what I'm dealing with as an aging athlete and with injuries, where I feel like sometimes it gets kind of lost in the commotion at the bigger places.”

Unbeknownst to him at the time of splitting away from his previous gym for a smaller team, Miller’s move likely was the difference-maker in his ability to overcome a level of adversity that very few people, or fighters, can truly understand when he was diagnosed with Lyme disease in 2016.

“I thought that a lot of the symptoms that I was dealing with were just time under pressure. My joints hurt, so I just thought, ‘Injuries.’ I was dealing with neuropathy and thought it was just because my neck is banged up. Then once I found out that it was a thing that I could fight, it took a huge amount of pressure off my shoulders. I thought, ‘Okay, now what do I do? How do I beat this opponent?’”

Through some trial and error, Miller found the perfect strategy to beat likely the most challenging opponent yet: a chronic illness that manifests as an inflammatory autoimmune disease with unpredictable symptoms, to be controlled only by, you guessed it, a consistent lifestyle.

“Health comes from consistency,” Miller said, adding that his already-established workout regimen made it easy to follow a consistent lifestyle, but his diet alongside the small team of coaches and training partners that knew him so well were the real game-changers.

“Not everybody's gonna have a good day on sparring day, and as the athlete, it’s really difficult to say, ‘Well, I feel slow today. I feel sluggish today. I had a s*** night's sleep,’ and say, ‘No, I'm not getting six hard rounds. Today, I think I can only do four.’ So, having a group that isn't all driven by ego who can say ‘Jim’s having a s*** day, let’s take it easy,’ is a big thing.”

Although living with a chronic illness, let alone competing with one, is difficult enough, Miller still finds joy in his daily grind, now more than six years after his diagnosis.

"They are either going to be super nervous or they are going be like 'F*** it I'm going as hard as I can.'"@JimMiller_155 is preparing himself for whatever version of Nikolas Motta he faces at #UFCVegas48 🔊⬆️ pic.twitter.com/icxsGe8wXG

“Before I knew I had Lyme, I was trying to get to UFC 196 so that I could retire at UFC 200. But everything after that has just felt like a gift,” Miller said. “It wasn't easy. There were some very difficult camps and other bulls*** that I've had to deal with. But I've got one life and I’m going to continue to fight in the Octagon for as long as I can. I'm enjoying the process.”

As he nears his 40th walk to the Octagon — and don’t worry, that will be the storyline next time — Miller seems to be at peace with what the future of his career may hold.

“I never like to try to make the decision to retire for other fighters, and I'm not big on commenting on that. But sometimes you do see fighters that I feel like they stick around a little too long, and nobody wants to be that guy,” the New Jersey native said. “But I'm still performing, I'm still coming out and having good fights and winning bonuses and knocking people out and submitting people.

“So my path here as I near the end of my career is different than some of my peers have had at the end of their career. So I'm gonna keep doing it. And when I do decide that I'm making my last walk, that's gonna be it. And I'm excited for that, too.”

We won’t get ahead of ourselves, as this weekend Miller will look to capitalize on the momentum gained from his second-round knockout over Erick Gonzalez in October as he heads into his rebooked bout against Brazil’s Nikolas Motta — the first in Miller’s 50 professional fights he didn’t make it to the Octagon for. 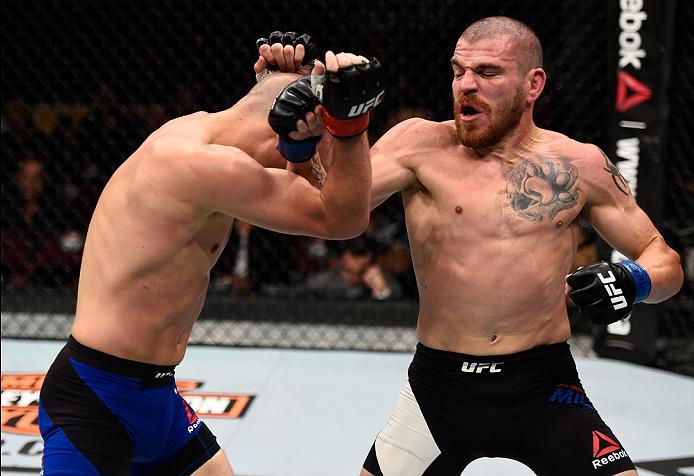 VANCOUVER, BC - AUGUST 27: (R-L) Jim Miller of the United States punches Joe Lauzon of the United States in their lightweight bout during the UFC Fight Night event at Rogers Arena on August 27, 2016 in Vancouver, British Columbia, Canada. (Photo by Jeff Bottari/Zuffa LLC/Zuffa LLC via Getty Images)

“COVID is the only thing that kept me from coming to a fight,” Miller said with a chuckle of irony, his coach adding that he’s come to be known as “Iron Man” due to his consistency and reliability over the years. “I enjoy every opportunity I get to step into that Octagon, so while I don't get angry about missing a fight, I still wanted to make it up as fast as I could.”

Facing back-to-back UFC debutants hasn’t fazed Miller much; in fact, it has posed an additional challenge that he welcomes.

“I know that a guy that's making his debut, especially against somebody that has the track record that I have, is either going to be super nervous, or they're going to be like, ‘F*** it, I'm going as hard as I can.’ So, I'm expecting it to be the hardest fight that I've ever had,” Miller said. “That's the way that I train for every fight; just because he doesn't have the Octagon experience that I have doesn't mean he's not a dangerous fighter.”

Looking to halt Motta’s three-fight win streak, Miller knows the key to success — like in other areas — is consistency.

“We already did a camp for him, so it was very easy to just hop back into some of the things that we were preparing for. It’s also been a few months, so he could be a different fighter than the video that we have, so that's why I focus a majority of my time on training my skills to be better at what I'm good at. And then I have my coaches kind of funnel in some stuff specifically for an opponent.”

While this is Motta’s first proper walk to the Octagon after an appearance on Dana White’s Contender Series, fighting is certainly not something new to him. 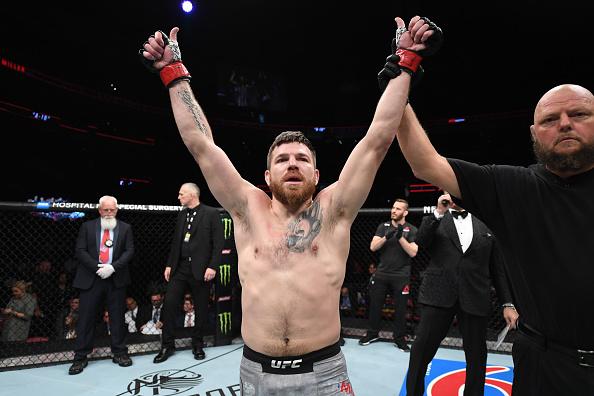 Jim Miller celebrates his submission victory over Jason Gonzalez in their lightweight bout during the UFC Fight Night event at BB&T Center on April 27, 2019 in Sunrise, Florida. (Photo by Jeff Bottari/Zuffa LLC)

Jim Miller celebrates his submission victory over Jason Gonzalez in their lightweight bout during the UFC Fight Night event at BB&T Center on April 27, 2019 in Sunrise, Florida. (Photo by Jeff Bottari/Zuffa LLC)

“He's a tough, tough dude that's fought a bunch of people and he's been fighting for a while. But overall, it’s a fight,” Miller said, laughing. “I wish there was more to it that I could say, but really, anybody can knock anybody out. Anything can happen in there, so I approach every fight like he’s the most dangerous guy there is. I have to fight him, so I’m going to go in there, fight my fight, and not let him dictate.”

Whether it’s a battle against Lyme disease, battling the temptations pulling him away from his structured diet and lifestyle (like pizza), or a battle against a fellow UFC lightweight, Miller will always fall back on the one thing that has fueled him all these years: consistency.