Conor McGregor Will Intimidate, Infuriate, Dominate. All At Once. 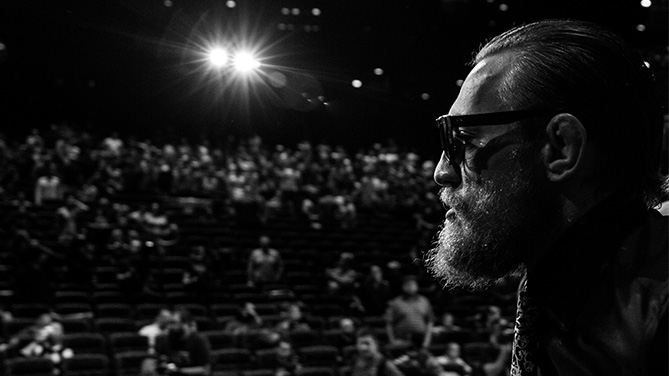 Conor McGregor is somewhere out there, running hard in the 110-degree Las Vegas heat and not giving a damn about it. In fact, he loves it -- loves sweating and grinding and pushing himself at a pace the rest of us can’t imagine. The unbearable summer heat is nothing more than another obstacle to overcome.

RELATED CONTENT: The Rise Of Chad Mendes | Inside The Irish Invasion | Is Mendes In McGregor's Head | McGregor Plans To 'Butcher' Mendes

By the time he comes strolling into his seven-bedroom, eight-bathroom rental home in Henderson – his McMansion, as he calls it – he’s dripping with perspiration but barely breathing hard. Seven miles he runs, plus a stop at a local playground for some pull-ups on the monkey bars, push-ups and sit-ups. Exhausting for sure, but it’s all a part of his preparation. 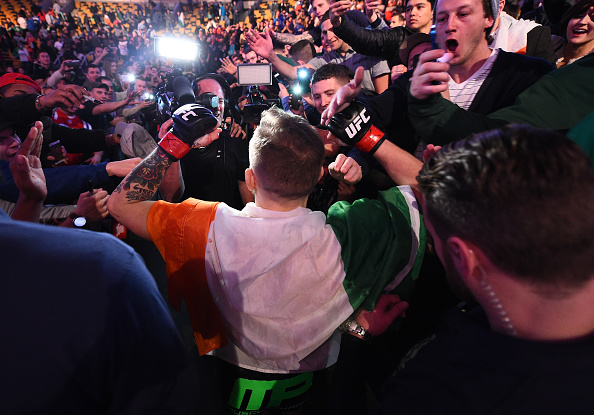 The days can’t turn fast enough, but McGregor embraces them anyway. By the time he faces Chad Mendes at UFC 189 on Saturday night – two contenders vying for the UFC interim featherweight title -- he will have spent more than two months living and training in Southern Nevada, his home away from home.

It’s not Dublin. Nothing will ever replace his homeland, but this will do just fine.

“I miss my home,” he says. “I miss Dublin. I miss my dog, I miss my family, I miss my friends. So I look forward to returning with the gold, and it makes it all worthwhile.”

This whole trip -- from virtual unknown in the U.S. to worldwide MMA sensation -- has been worthwhile for McGregor, if for no other reason than he’s done it on his terms. He is like no one else the UFC has ever seen, a unique personality with a knack for agitating opponents and creating two distinct camps: those who love him and those who despise him to the core.

But this is who he is, take him or leave him.
“Conor is going by how he feels at that moment.”
- Dee Devlin, McGregor’s girlfriend of 8 years.
“It’s very natural with Conor,” says Tom Egan, his friend since childhood and a longtime, trusted training partner. “He understands that in order to get places, you need to make some noise. But he’s always understood it. It’s come very natural to him.”

The McGregor persona -- crude, confident, sometimes outlandishly funny -- is the essence of who he is. Nothing is planned or calculated. Whatever he says, whatever he does – whether it’s mugging for a camera with bulging eyes and mouth wide open or snatching away the championship belt from Jose Aldo, as he did during their recent world tour – is created in a fleeting moment of brilliance.

“Conor is going by how he feels at that moment,” says Dee Devlin, his girlfriend of 8 years. “He’s hyped up by the atmosphere he’s in, so he’s going to be more outspoken. But that’s not to say he’s a different person. He’s the same person he always is.” 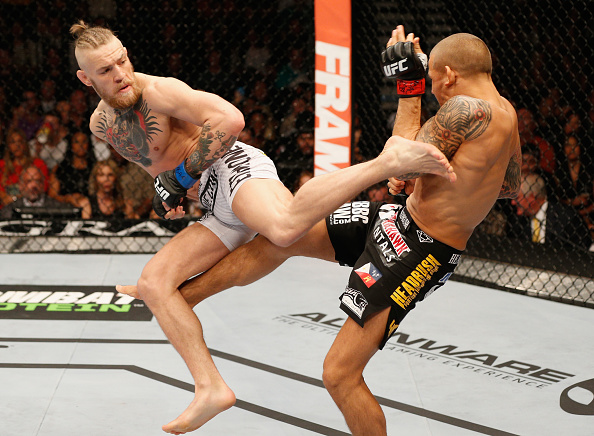 In the same way that Muhammad Ali turned the world of boxing upside down with his poetry and his bold predictions, McGregor has grabbed the UFC by the throat with his “look-at-me” personality inside and outside the Octagon. Boastful fighters are nothing new in the UFC – think: Chael Sonnen -- but it’s arguable that no one comes close to McGregor’s style and substance.

“He and Chael are not even close,” UFC president Dana White says. “Conor’s got that charisma and that thing you can’t teach. You either have it or you don’t, and people are attracted to it.

“Some people take it as cocky, but it’s unbelievable confidence in himself. When you sit down and listen to what he’s saying, he makes you believe.”

Even a change in opponents hasn’t altered McGregor’s cheeky manner. After Aldo bowed out citing a rib injury, Mendes, the No. 2 featherweight contender, stepped in. But McGregor didn’t release his foot from the rhetoric accelerator, dismissing Mendes as a “B-level” fighter, dismissing his wrestling skills and promising to “butcher” him.

Why slow down? McGregor clearly has two speeds: on and off.

When he’s on, no one plays mind games better. His non-stop, in-your-face chatter undoubtedly annoyed Aldo during their World Tour, and he’s kept it going full speed against Mendes, whose best retorts during a recent media conference call were little more than background noise. 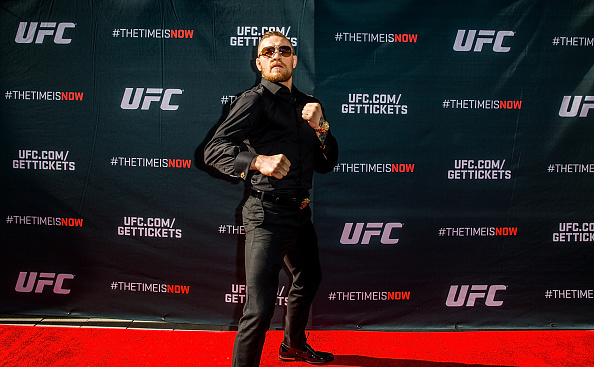 Get into their heads, McGregor reasons, and the battle is half won.

It’s a skill McGregor was either born with or learned at a very young age. As kids, Egan said, McGregor used to love intimidating opposing players on the school soccer pitch.

“He was the guy who would make some noise,” Egan remembers. “He wanted you to feel his presence.”

“I’m just having fun.”
- McGregor, on playing verbal mind games.
At the mention of this, McGregor smiles. But it’s a sinister kind of smile.

“Before the match would start,” he recalls, “I’d be standing on the side where the ball was going to be kicked into play. And I’d get into the guy’s face a little bit, try to (mess) with his head so he’d play scared.” 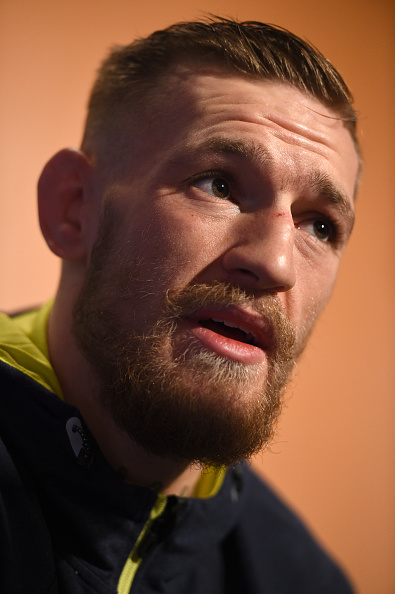 Nothing has changed. McGregor uses his mind games to take apart an opponent’s confidence but also to build up his own. He walks and speaks with self-assurance. He dresses like he’s walking into a boardroom. He’s the coolest kid in class, and if you don’t realize it, just watch him.

Devlin says she can’t recall meeting McGregor for the first time, but it was before he started fighting professionally. Even then, he had a way of taking over a room.

“I was obviously drawn to him like everyone else is,” she says. “He’s always been like that. We could walk into a party and people will gravitate to him without realizing they’re doing it. People are just attracted to him.”

It comes naturally. If McGregor sometimes seems over the top, a little extreme, it just happens. Nothing is scripted.

“The day he walked into the gym, he was this loud, boisterous personality. Some people are just born that way, and he was born that way.”
- John Kavanagh, McGregor’s head coach
Once he gets wound up, McGregor doesn’t stop. But that’s not a criticism. He knows how to sell himself, sell his image and sell tickets. It’s genuine.

“A lot of people ask me, ‘Is Conor really like that off screen?’” Egan says. “The truth is, Conor has always been like that. He’s always had an amazing ability to build confidence in himself and the people he cares about.” 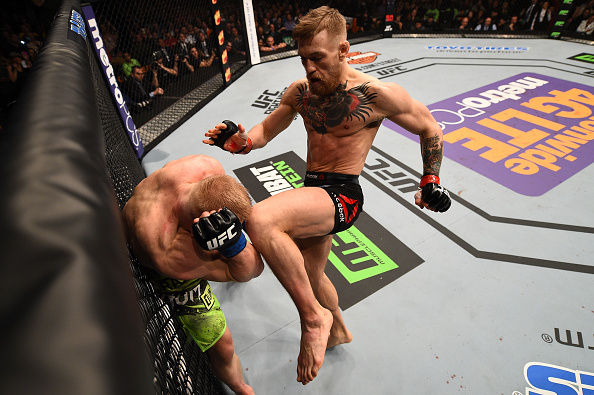 It carries over to his fighting. From the start, McGregor had a swagger that couldn’t be ignored. He made sure everyone knew he was here to stay.

“When you look at his interviews from 2007, 2008 when he was fighting for pennies on local shows, he was the same -- an almost arrogant, confident young man,” says John Kavanagh, McGregor’s head coach. “The day he walked into the gym, he was this loud, boisterous personality. Some people are just born that way, and he was born that way.”

White says he took notice of McGregor immediately after their first meeting – without ever seeing him fight. Within minutes, he was on the phone with Lorenzo Fertitta, the UFC’s CEO.

“The first time I ever met him, as soon as I was done with the meeting I literally called Lorenzo and said, ‘Listen, I don’t even know if this guy can even fight, but if he can throw a punch he’s going to be the biggest star we’ve ever had,’ ” White says. 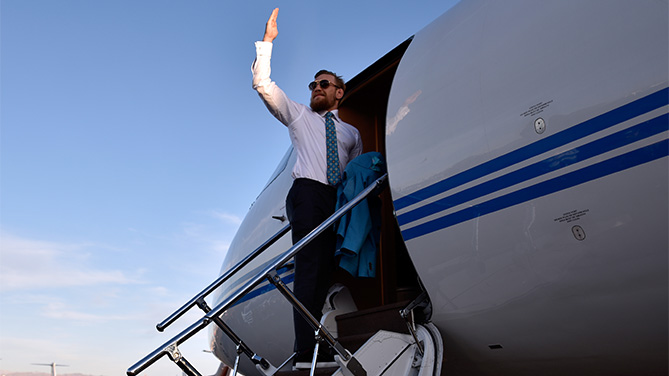 By the time McGregor made his UFC debut in April 2013, he was already a hit in Ireland. One year later, U.S. audiences were undoubtedly stirred when he scored a first-round KO of Diego Brandao in Dublin on UFC Fight Night, launching his star and making his fights must-see TV.

But even though he was the new kid on the block in America, Kavanagh says, McGregor was already prepared for bigger things. In effect, his first five UFC bouts were warm-ups.

“We had done our apprenticeship in Europe,” Kavanagh explains. “I really felt that in his first fight in the UFC, he was ready to fight Aldo.

“We didn’t come into the UFC learning. We did our learning in Europe. We had our losses, we had our wins, we got our experience. So by the time we graduated into the UFC, he had a lot of fights.”

McGregor’s success isn’t to be taken lightly, regardless of the continent. Of his 17 wins, only one was by decision. Of the others, 16 were knockouts (including 12 first-round finishes) and one was by submission.

To McGregor, fighting is more than just an occupation; it’s his everything. On a few occasions during their relationship, Devlin has woken up in the early morning to see her man shadow boxing. He doesn’t play video games or other sports. If he wants to relax, he hangs with his buddies and training partners.

“He doesn’t have hobbies,” Devlin says. “He doesn’t play golf. Anything he does outside of his training is related to his training, like running. Even watching a movie is hard for him. To fully concentrate on something for two hours is a hard thing for Conor to do.” 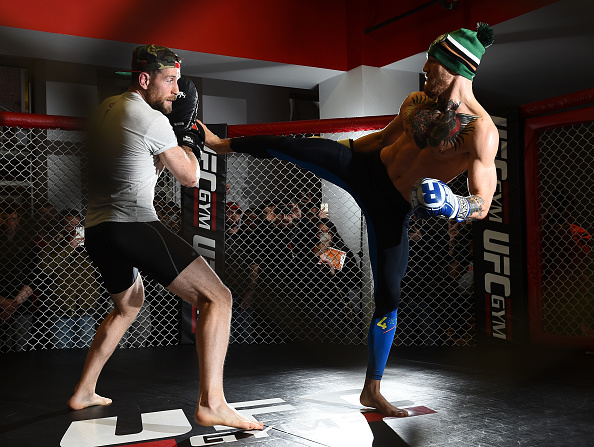 As Egan says, “This is his life. This is all he loves to do. After he beat Dennis Siver (in January), we pretty much got some food and went to the gym in the days that followed. That’s our hobby.”

The UFC is reaping the benefits of the McGregor Effect. White feared the worst when Aldo withdrew, but interest in Saturday’s fight has continued to ramp upward.

“We’re going to hit a $7.1 million (live) gate, and Aldo isn’t even here,” White says. “Pay-per-view numbers right now are trending toward a million buys without Aldo. And this guy has five fights in the UFC. No one has ever done what Conor McGregor has done.”

McGregor knew it would happen. He knew it the moment he stepped into the Octagon and found his home. If this was his plan all along, it has fallen neatly into place.

And he wouldn’t change a thing.

“I love this job,” he says, with complete sincerity. “I love what I do.” 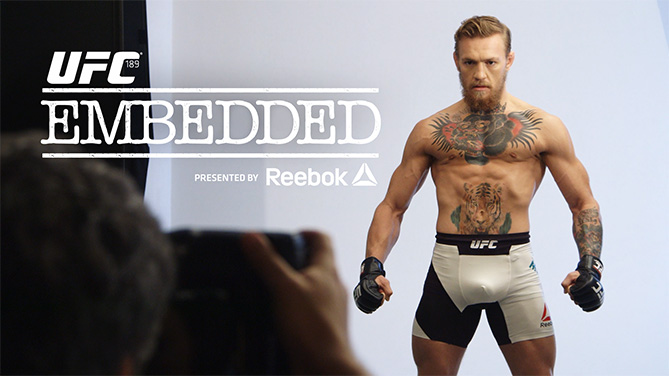 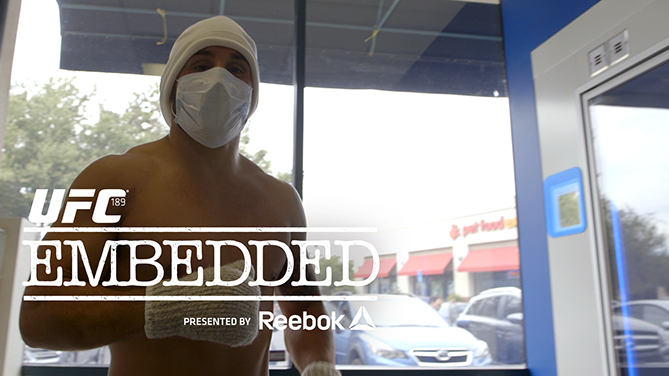 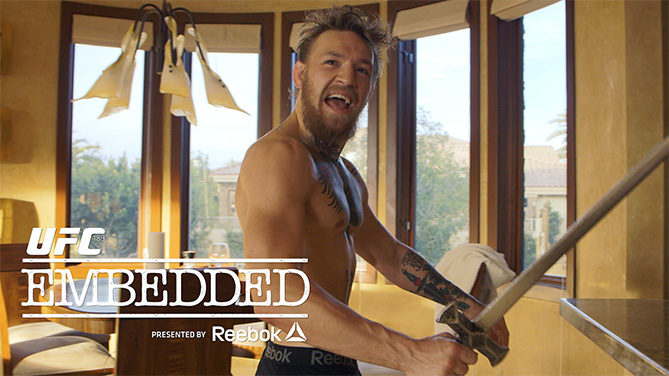 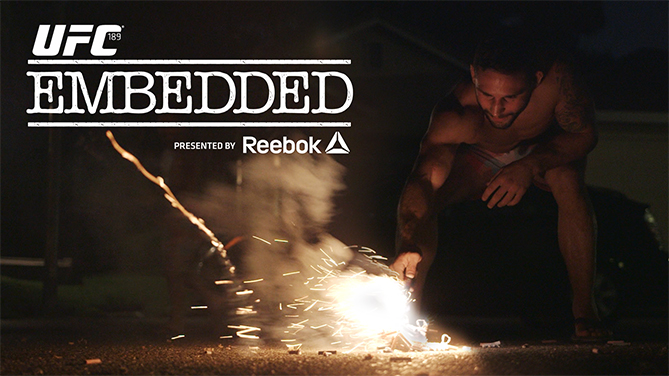 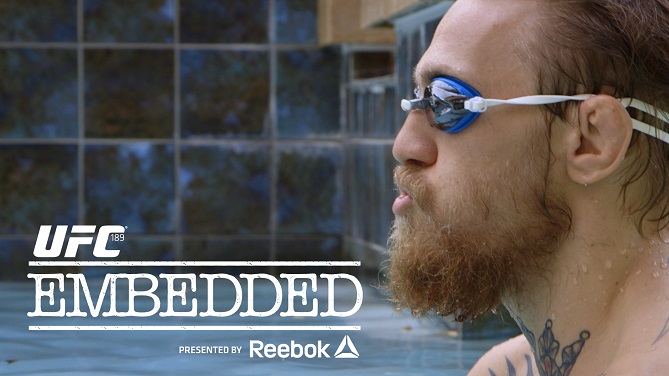 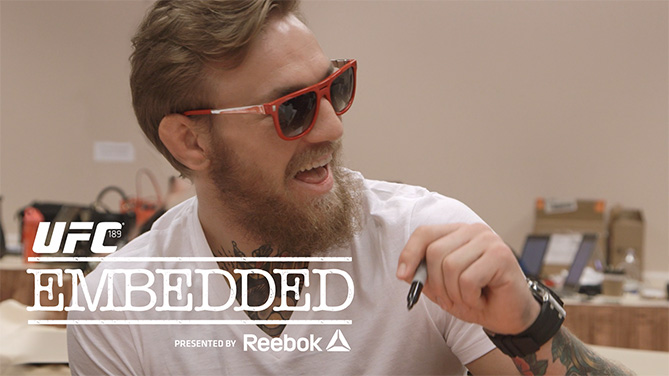 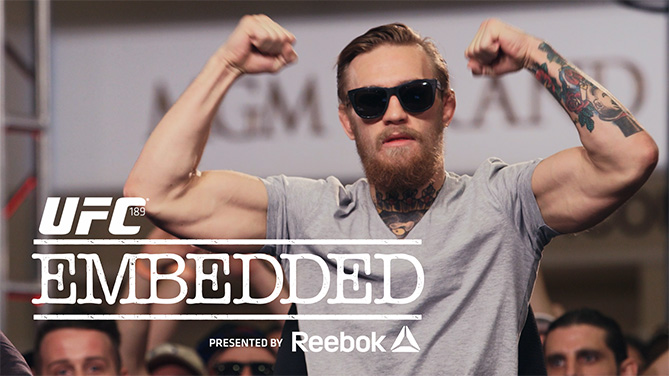