"One of my favorite things to do in life is say I’m gonna do something
and then go out and do it. There’s no better feeling for me
than doing that. It’s a beautiful thing." - Conor McGregor 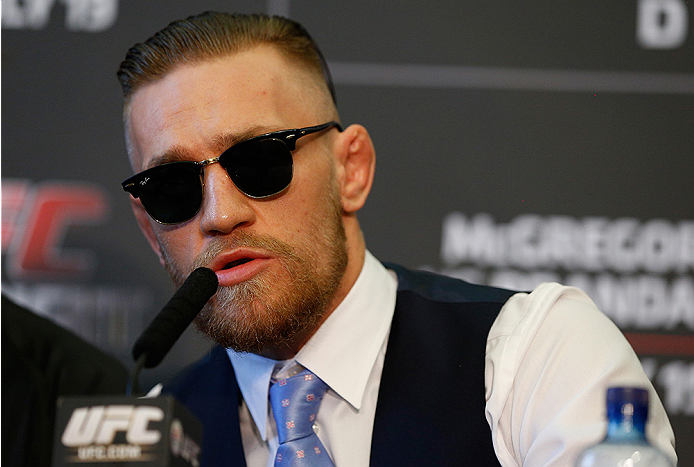 Just two fights into his UFC career, and Conor McGregor is an old pro at this whole media thing.

How good is he? He can do an interview in the midst of warming up for a training session that will hone his skills for Saturday’s UFC Fight Night main event against Diego Brandao in Dublin, Ireland.

But if he’s doing two things at once, will we still get some good material for the story?

It’s pretty obvious that “The Notorious” McGregor is feeling the pressure before headlining in the O2 Arena this weekend, and yes, you can note the sarcasm in that statement.

“It’s just another day for me,” said the 26-year-old Irishman. “I’ve been the star since Day One. It’s just another day in the life of a king, and it feels normal. Everything is the same. In my head it was always like this, no different. And I’m going to perform like that as well. People think there’s pressure; I don’t feel pressure, I never did. I’ve been in a UFC main event every fight of my career.”

The crazy thing about all this is that McGregor believes every word of it. Ask those around him and they’ll say the same thing. From the first time he strapped on the gloves, he’s known that this was his destiny. To fight in the UFC, to headline at home, to eventually win a world title and become a crossover superstar, it’s all been part of the plan. That’s confidence on top of confidence, but even the man of a thousand answers can’t pinpoint how it became that way for him.

“I don’t know where it comes from, I just feel it,” he said. “I feel like I always did, even fighting in the small shows. My very first fight, I was the first guy on the card, 50 people in the place, and to me that was the UFC main event. I wore a robe out, had a hood up, and that was a world title, a packed arena. Who can tell me otherwise? If that’s the way I feel, and that’s what I see, then that’s the way it is. No one can say any different.”

> Watch: Conor McGregor and Diego Brandao Face Off At The Weigh-in

Yet while the fans eat up every word and the rest of the featherweight division seethes at his trash talk, some also resenting the attention he’s received heading into his third Octagon bout, he has delivered on the boasts he’s been put in position to back up thus far. He knocked out Marcus Brimage in 67 seconds in his UFC debut in April of 2013, he beat a tough foe in Hawaii’s Max Holloway last August, and after returning from nearly a year off due to knee surgery, he sold out the O2 in Dublin in minutes.

“One of my favorite things to do in life is say I’m gonna do something and then go out and do it,” he said. “There’s no better feeling for me than doing that. It’s a beautiful thing.” 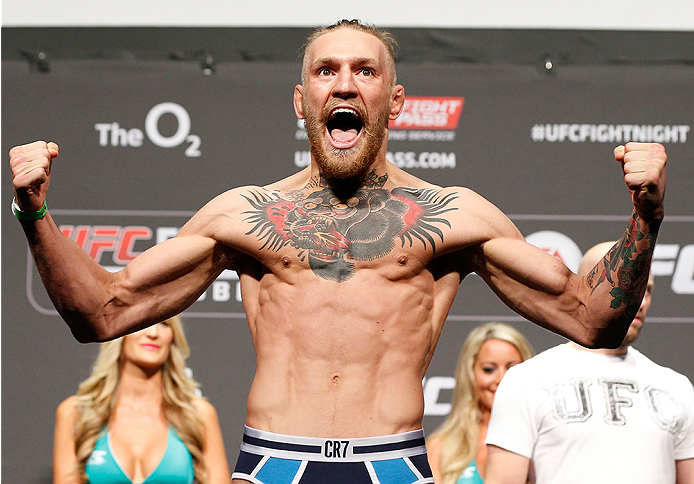 It is, and when you mix his talent with his charisma and knack for self-promotion, his star potential is limitless. But he has to win his fights, and Brazil’s Brandao, a late replacement for the injured Cole Miller, is a dangerous foe, at least to the outside world. To McGregor, he’s just another victim.

“Diego is one of the most feared guys in the division,” McGregor begins, verbally jabbing before whipping in the hook. “He’s a bad, bad man until the door shuts, until it’s time to fight. Then he crumbles, then he’s like a little boy in there. He’s a tough guy outside, but when it’s time to fight he doesn’t show up. So July 19, we’ll see.”

At this point, the amount of fans who want to see McGregor lose is probably neck and neck with those who want to see him win, and the same goes for his peers at 145 pounds. They would love to see the Dubliner get his comeuppance, but if he keeps winning and they get a crack at him, the match isn’t a fight anymore, but an event. None of this is news to McGregor, and even though he’s set his sights on practically everyone in the division, despite their greater standing or experience, he knows when it comes to the bottom line, he’s the A side.

“In my eyes, I’m speaking the truth on these guys,” he said. “I was never impressed with any of them before and I’m not impressed with any of them now. I just happened to infiltrate the division, and everyone’s tuning in to see what I’m going to do July 19. Cole pulled out, but did anyone even bat an eyelid? And Diego’s brought in and no one batted an eyelid. No one actually cares who’s in front of me; no one cares who the opponent is. It’s me they’re coming to see, it’s me people are cheering for July 19, and that’s on both sides of the border – your side and my side.”

And from his point of view, this is just the beginning.

“I’m just warming up,” he said. “You’re gonna have to get used to my handsome Irish face