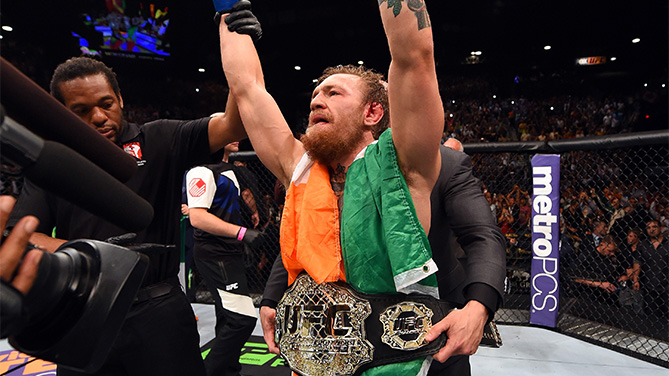 Conor McGregor was on his back, struggling to get back on his feet and avoid the elbows and fists that were raining down on him.

He was in deep trouble. Or was he?

Late into Saturday night, with the UFC interim featherweight belt in front of him, McGregor insisted he was in complete control. No matter how bad it might have looked -- or how concerned his fans at the MGM Grand Garden Arena might have been -- he knew he would find a way.

“I was never in any danger in that contest,” he said. “I felt extremely confident.”

After weeks of pre-fight posturing and non-stop trash talking, McGregor proved he was every bit as good as he claimed to be. But it also took all the resolve he had to defeat Chad Mendes.

UFC 189 was McGregor’s moment, from beginning to end. On a fight card that was arguably the best in UFC history, he and Mendes provided the closing act – a fight to determine an interim champion to challenge Jose Aldo.

But McGregor didn’t want to talk about Aldo, who bowed out with a rib injury. Neither did UFC president Dana White. Aldo wasn’t in Las Vegas, and although he and McGregor will ultimately face off at some point, this was not the time to discuss it.

“I’m going to put Jose at a distant memory right now because I don’t think he deserves to be talked about here,” McGregor said. “He didn’t show up. He should have made that walk. I respect Chad for making the walk and showing up.

“In my opinion, Jose’s done. If the fight comes around, we’ll discuss it then. Right now, this is my night.” 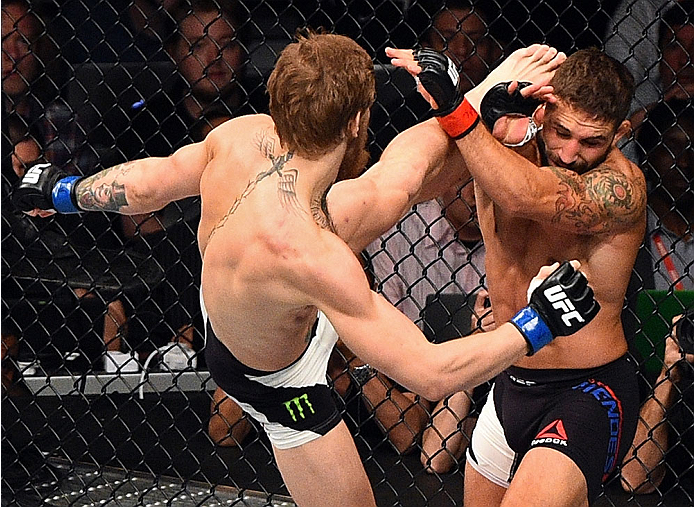 McGregor walked into the post-fight press conference wearing sunglasses, a blue and black sports coat and a gold watch that sparkled with diamonds. He dabbed at a cut on his left ear, a remnant from his rough night. But he lost none of his bravado, none of his confidence.

Four times he was taken down by Mendes. All four times he scrambled back to his feet. The final time, after Mendes failed to apply a choke near the end of the second round, McGregor seized the moment and closed out the fight.

His long reach gave him an advantage, and he used it to throw kicks and punches that kept Mendes at a distance. He threw a right hand, then a solid crossing left that caught Mendes on the jaw and put him down.

McGregor didn’t let up, pouncing on Mendes and firing more shots before referee Herb Dean stopped the bout at the 4 minute, 57 second mark of the second round. 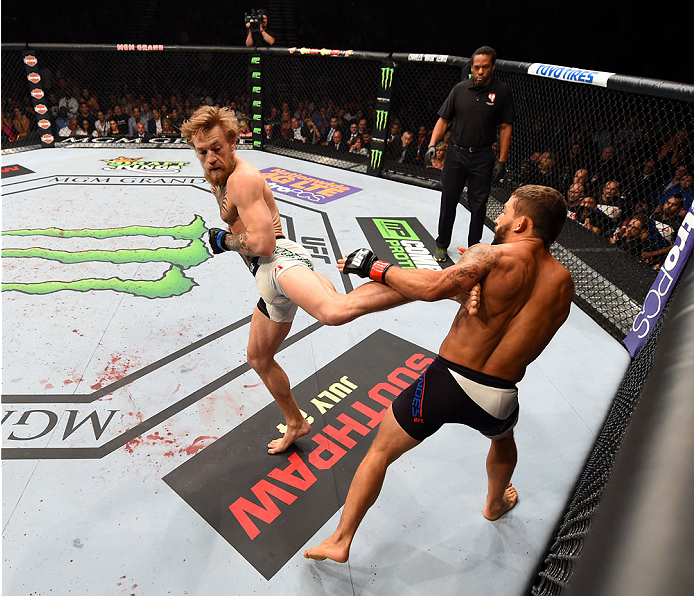 McGregor fell to his knees, hugged the Irish flag and allowed the tears to flow. Not for his victory, he said, but for his country. Several thousand Irish descended on Las Vegas, and he wanted to win this for them.

They were the reason he accepted Mendes as an opponent after Aldo withdrew because of a rib injury. He refused to disappoint, knowing so many had already sacrificed and committed to fly in for the fight. He didn’t want to let them down.

He also wanted to answer his critics, who insisted he couldn’t handle a wrestler of Mendes’ supreme skill level. But he did.

“I’m always confident that I can take whatever these people give. I can work through everything. He hit me with a few good shots maybe. He caught me above the eye with a little elbow. There were glancing blows.”

He even kept the trash talk going inside the Octagon, jawing continually at Mendes. When Mendes landed a punch, McGregor said, “Is that all you’ve got?” 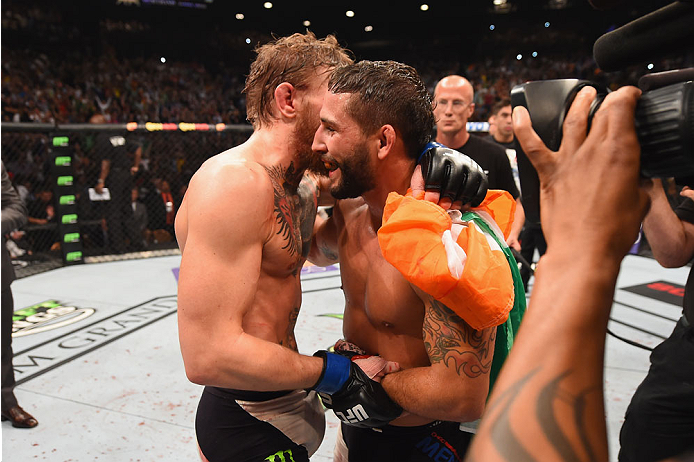 But make no mistake, Mendes was a worthy opponent. He hit McGregor with a shot in the first round that opened a cut on the corner of the Irishman's right eye. On the ground, he used punches and elbows to rattle McGregor.

“He had heavy shots, but I didn’t feel nothing,” McGregor said. “He had takedowns, but the efficient man prevails.

“I was patient. I landed shots when I could. He threw an elbow that split me in the eye. Every shot, I kept saying, 'Uh uh. Nope.’ I felt I was preserving energy.”

If that was his plan, it worked. Believe him or not, he knew precisely how this would end.

“I love this game, I love this ride I’m on,” McGregor said. “It wouldn’t have mattered if it was Jose or Chad. This is my belt, this was my night.”