“I feel that when we collide, he will collapse,” Conor McGregor on matchup with Jose Aldo. 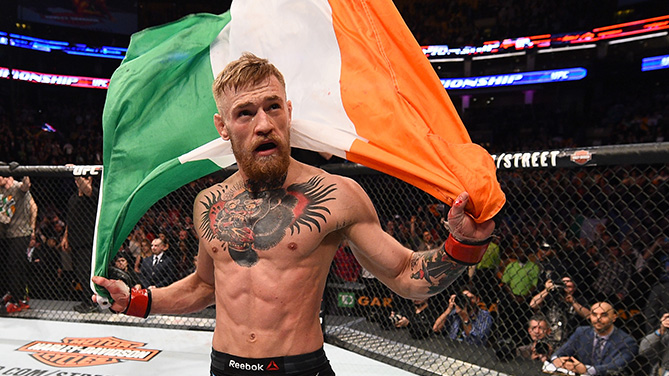 BOSTON
Conor McGregor keeps answering the questions.
Fight after fight, knockout after knockout, the brilliant Irish featherweight is proving his critics and doubters wrong.
“People seem to think it’s all talk,” McGregor said at the Fight Night Boston post fight press conference, shortly after dismantling overmatched Dennis Siver before a raucous crowd at TD Garden. “They all think it’s fun and games. But I’m not playing here.”
With another entertaining TKO finish under his belt, McGregor now sets his sights on the next question: Can he dethrone the 145-pound king, Jose Aldo?
“Now Jose is next in line, and he will be the next to learn that it’s not all talk, and it’s no joke,” McGregor said. “It’s tradition. I remove a head, I bring it backstage, I place it on Mr. (Lorenzo) Fertitta and Mr. (Dana) White’s desk – here you go boss. Another one done, and then we discuss big business. We are going to go to Las Vegas and one more head will be collected.”

Aldo is widely considered one of the top pound-for-pound best fighters in the world. He’s the only man to ever hold the UFC featherweight title, and he hasn’t lost a fight since November of 2005.
The Brazilian and the Irishman have been on a collision course for each other ever since McGregor burst onto the scene in the UFC and made his title aspirations known.
White said that the fight should happen in May in Las Vegas, provided both fighters are healthy and ready to compete. Stylistically, the matchup has all the ingredients for a classic.
Aldo has never faced a striker as complete and powerful as McGregor, while “Notorious” has never faced a fighter of 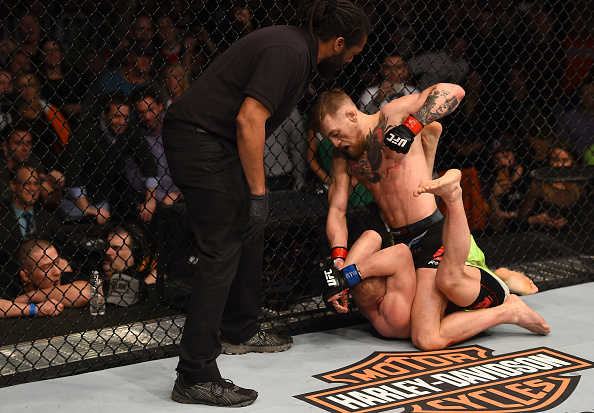 Aldo’s caliber.
Wherever the fight goes, Aldo is right at home. He has some of the most deadly leg kicks in MMA and is a Brazilian Jiu Jitsu black belt.
When McGregor locked eyes with Aldo immediately following his win over Siver, he got caught up in the emotion of the moment. He leaped the fence and flew out into the crowd to confront his next opponent.
McGregor said he went out there to attack – and he made a statement.
“I just seen his skinny Brazilian head, and I knew they flew him over here,” McGregor said of Aldo in the seats. “He’s sitting there, front row. They thought I was going to see my girlfriend or hug me girlfriend. They must have thought I was a romantic. But I was going to kill that little Brazilian.”

Once the cage door shuts and Aldo and McGregor finally meet, it will be interesting to see how each decides to approach the fight. At first glance, it would make sense for Aldo to try and chop the challenger down by attacking the lead leg.
Against Urijah Faber earlier in his career, Aldo was relentless with this tactic. By the end of the fight, Faber could hardly stand. He struggled to walk for a week after that fight.
McGregor, on the other side, will likely try to use his world-class movement to try and neutralize the impact of Aldo’s leg kicks. He’ll hold the reach advantage, and as we saw against Siver, his straight left hand is devastating, especially 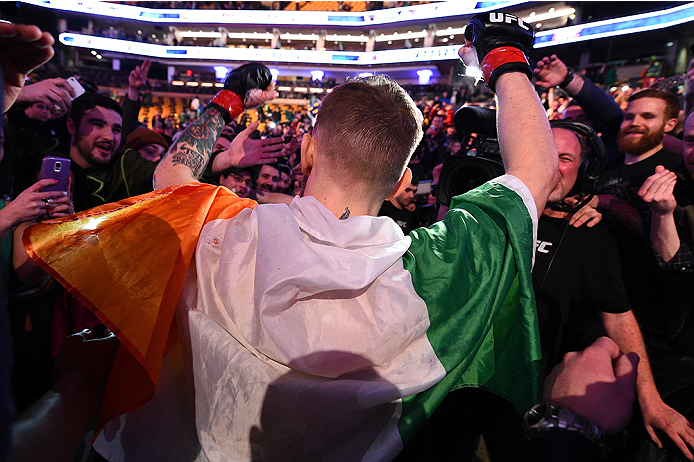 as the damage takes its toll over the course of the fight.
McGregor said that he enjoys answering these questions that the fans and media pose. He wants to beat Aldo and then go on to challenge the wrestlers of the division, to prove that he is the best in the world.
He has his chance now to earn the title belt he’s so desperately longed for. And when he meets Aldo, he said, he will be the victor.
“I feel that when we collide, he will collapse,” McGregor said emphatically.