Conor McGregor runs this town now. After a year of hype and buildup, the Dublin, Ireland native delivered on his promise in the main event of UFC 194 Saturday at the MGM Grand Garden Arena, taking just 13 seconds to end Jose Aldo’s reign as UFC featherweight champion as well as his decade-long unbeaten streak.

“He’s powerful and fast, but precision beats power and timing beats speed,” the 27-year-old McGregor said of his knockout victory, which came after the pair’s original meeting in July was postponed due to an Aldo injury.

“I feel for Jose,” McGregor added. “He was a phenomenal champion.”

Aldo, who had made six successful defenses of his title, was devastated by the loss. 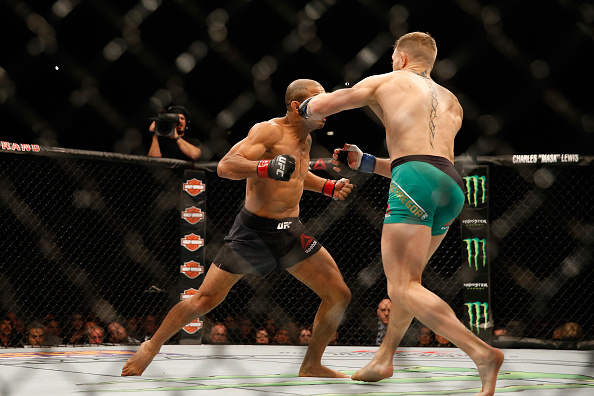 As soon as Aldo entered the Octagon, he didn’t take his eyes off the canvas, while McGregor was at ease, practicing kicks and taking in the atmosphere. That changed as soon as referee John McCarthy waved them into battle, Aldo locking in on his foe.

But there would be a new undisputed champion within seconds. Engaging immediately, Aldo attempted a wide left hook, but before it got close, McGregor landed flush with a short left hook and Aldo collapsed to the mat. Two hammerfists later, and referee John McCarthy had stepped in.

The finish was the fastest ever in a UFC world title fight, beating Ronda Rousey’s 14-second submission of Cat Zingano in February, and Andrei Arlovski’s 15-second knockout of Paul Buentello in 2005.