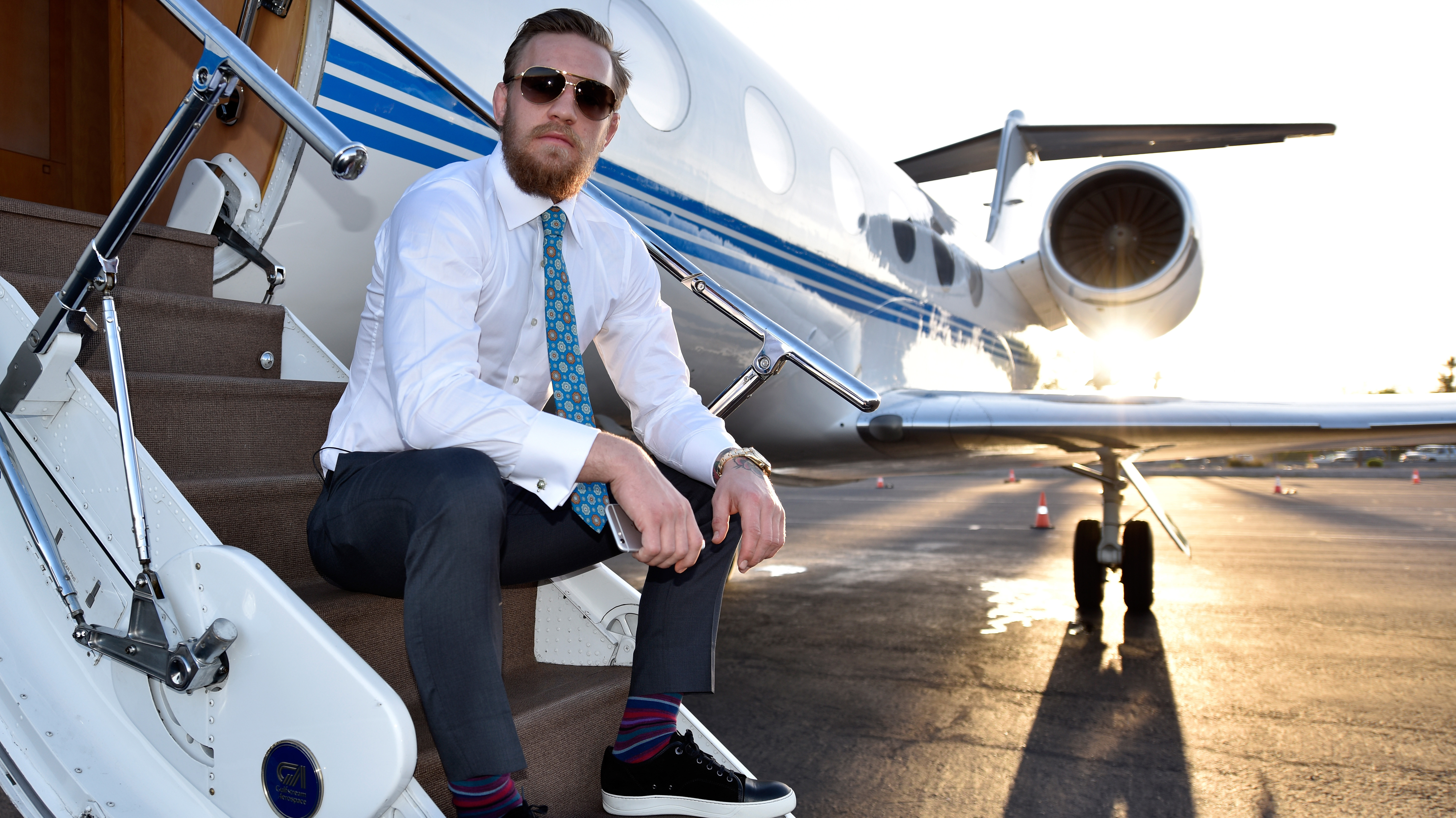 Conor McGregor has carried 11 brilliantly unique bespoke suits with him as a calling card on his UFC 189 World tour, an exclamation point wardrobe befitting a superstar as he navigated the globe, and to confirm his coronation as a man who has truly arrived at success.
> READ: London recap | Toronto recap | Boston recap | Los Angeles recap | Las Vegas recap | Rio de Janeiro recap

Exactly two years ago, McGregor wore the simple garb of a plumber in Dublin, where he toiled while fighting and training part time. He’d just collected a social welfare check of €180 (about $235 at that time).

Frustrated and desperate for more, McGregor drilled Marcus Brimage at 1:07 of the first round in his UFC debut on April 6 2013, and collected a stunning $60,000 knockout bonus. 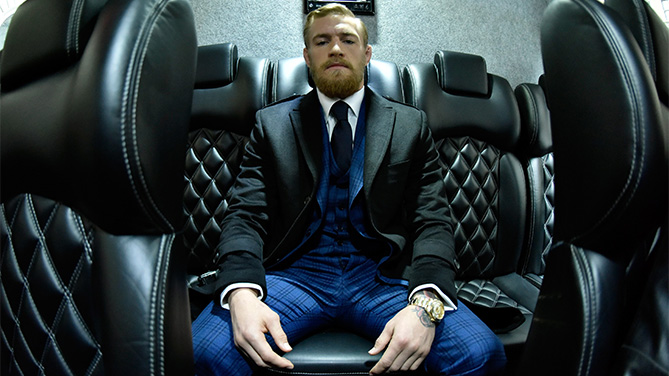 “Nobody can touch me with the suit game, yeah?” he told a large media contingent Monday in London, touching the lapel of a blue plaid, wool three-piece ensemble with coordinated pocket square and tie. “You know, nobody in the UFC ever wore suits before when they came up to do (interviews). And honestly, I never wore suits, because I didn’t have a reason to wear suits. You can hardly wear suits going to the gym.

“I always thought, ‘When I have the opportunity, I’m going to have a nice wool suit. And I’ve just rolled with it. And now the whole game is rocking suits.”

McGregor will look and carry himself as royalty when a crowd of more than 3,000 greets him Tuesday as he returns to the place he’s lovingly dubbed “The Irish Favela.” He will invite the entire Republic of Ireland along for his meteoric rise, and they’ll devour his energy.
> WATCH: World Tour Recap: London | Toronto | New York | Boston | Los Angeles | Las Vegas | Rio

The idea of this made him laugh raucously. “Honestly? I don’t even know what to expect at ‘The Irish Favela’ tomorrow,” he said. “It’s gonna be fun. It’s gonna be intense. And it’s gonna be passionate … they will come out in force, and they will let their voices be heard. We are here to fight.”

This is exactly why Irish from across the world identify with and revere McGregor. He personifies the fighting spirit that defines the Irish soul and work ethic. And his star power and success provide anyone of Irish heritage a touch point for hope.

That’s because McGregor wasn’t always this sure.

“Like a lot of young fighters, he was struggling to find himself and understand who he was. His purpose. And what he was looking to do with himself,” said Tom Egan, the UFC’s first Irish fighter who has known McGregor since he transferred to Egan’s Dublin school at the age of 15. “He was 18-19. He was doing plumbing, he was doing this and that. And it wasn’t until he understood that that wasn’t for him that he decided what he wanted to do.” 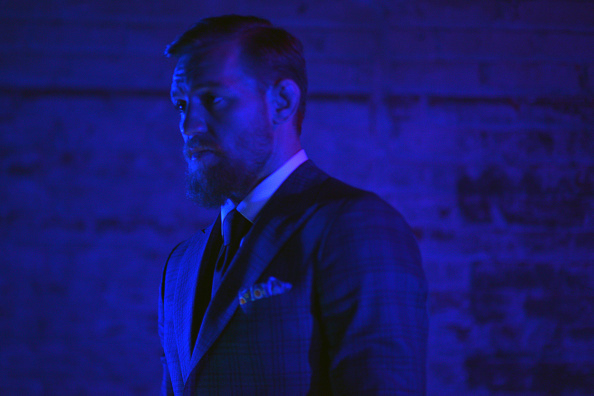 A classic Irish southpaw, McGregor devoted himself to the science of fighting. As an amateur boxing champion, he began incorporating aspects of kickboxing, capoeira, Tae Kwon Do and Karate into his unique combat style. To watch him work in the Octagon is to witness a fluid, intoxicating dance designed to destroy his opponent.

Dublin will help inspire McGregor as he retreats to the gym again to train for Aldo, and their date with destiny on July 11 in the co-main event of UFC 189 at the MGM Grand Garden Arena in Las Vegas.

“I think it’s a great place to wrap it up. It’s a great energy for me to wrap it up in my hometown, to see that passion,” McGregor said of his Dublin return. “That will carry me into this training camp. And I will show up July 11 prepared to kill.”

The Irish, or those professing to be, flocked to McGregor’s tour stops through the United States and in Toronto, with Boston and New York City featuring the most vocal groups.

Rob Mullane, 24, who hails from Cork, Ireland, drove from Philadelphia to the Boston tour stop last Wednesday to see an idol in the flesh.

“This is massive for me, because I’m Irish, first and foremost, and I’m a huge UFC fan. And I’m getting to see an Irish homeboy up there,” Mullane said, pointing to the stage where McGregor would appear. “It’s unbelievable for a sports-mad country. All we need is an opportunity to get behind someone like him. And we’re all behind him.

“All we need is an excuse to show for our own, and we do it.”

Said Egan, ““It’s huge. To have somebody who’s so confident, so willing, so strong with such a strong belief in himself, it transcends amongst all the other Irish people out there. As an audience, we take on that confidence and learn from a person like him.” 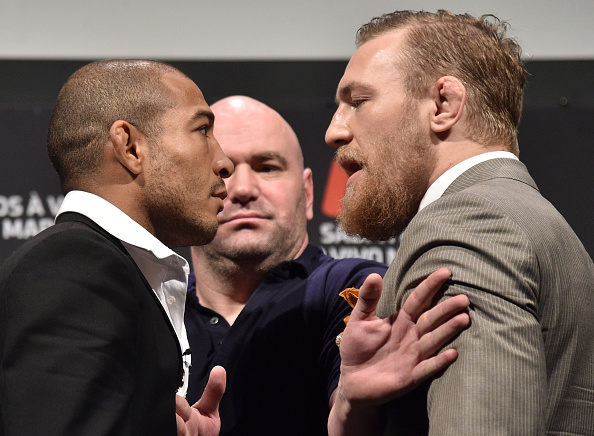 McGregor told the London media audience that fighting became his way “to make the uncomfortable become comfortable” in his quest for self-defense and self-improvement.

Egan saw this evolution take place, from the streets to the gym to the Octagon.

“Conor has often said in his interviews that as a young man he found himself in environments and certain situations, and that led him to want to learn how to defend himself, how to react and to think about it enough for it to become an obsession,” Egan explained. “And that transitioned to him wanting to do it for a living. “

After multiple jabs at Aldo’s heritage as a man raised in the poor Brazilian favelas during the often-tense World Tour, McGregor extended respect in London to the Brazilian community – “they are good people in the favelas, for the most part,” he said – but he reiterated that the UFC belt is about to be his and it’s nothing personal.

“This is business, and my opponent, simply, is Brazilian,” he said, “and I must take him out with no remorse.”

Said Egan, “He will win that belt, and he won’t lose his way. He’ll never forget where he came from, because he worked too hard for all of this.” 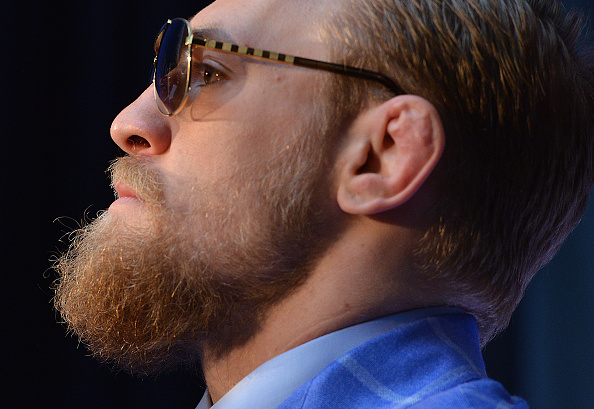 To be sure, McGregor has been supremely gracious, and grateful, for what’s happening to him.

And the suits? The hotel suites? The private jets and the Octagon success? This is just the beginning. McGregor wanted his traveling companions on the World Tour to know this as he stretched his legs along a leather couch aboard the UFC-commissioned Gulfstream G-IV last week, whisking him at warp speed from Los Angeles to the East Coast.

He laughed and put his hands behind his head. “This is the good life. The McGregor life!” he proclaimed.

And Conor McGregor is not about to let it get away.