"I love being here alone, traveling from country to country, beating up people from different countries." - Conor McGregor 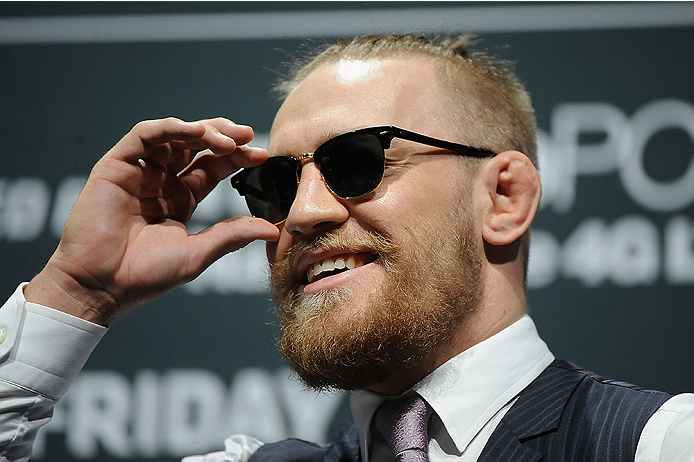 It was a quiet moment for Conor McGregor. On his way to Las Vegas to finish up preparations for his UFC 178 bout against Dustin Poirier, McGregor wasn’t surrounded by cameras or media for the first time in what must have seemed like forever. That was nice, that was peaceful, but it was about to pick up again and he knew it.

“You couldn’t possibly have done more media than I did in the lead-up to that Dublin fight; it was impossible,” McGregor said of the pre-fight blitz before his July win over Diego Brandao, a victory that headlined a UFC Fight Night event that sold out the O2 in his home city of Dublin in record time and produced one of the greatest atmospheres in recent memory. A lot of that had to do with the 26-year-old featherweight, who is well aware that things are going to be even bigger as the fights and wins pile up.

“That (Dublin) for me was a warm-up for every other show, to get me prepared so I have a feel for what a big time show is and what it means when you are the star attraction. I feel comfortable, it’s a part of the game, and do I love doing it? Not all the time. Obviously I would rather just get in and fight, but this is the nature of the beast, and we must partake in this.”

Few have done it better this early on in their career. McGregor is just three fights into his UFC career, but he has not just captured the imagination of a nation, but of the world. Whether you want to see him win or see him lose, you want to see him. And in the glare of the spotlight, he has found a home, but it’s in the Octagon that he finds his peace, and seeing him on fight night has garnered him fans from throughout the sports world, even among the boxing faithful, who are often slow to give mixed martial artists the credit they deserve. McGregor holds no such prejudices, eagerly embracing the sweet science, and especially its Irish practitioners.

“Of course, boxing has a big imprint in Irish culture,” he said. “We’ve got former world champions and Olympic champions. I admire all our boxing greats that came through our country. Steve Collins was one of them, and he was probably our main one. Bernard Dunne most recently, and our Olympic champion Katie Taylor, she’s probably the best female boxer on the planet. But at the end of the day, I didn’t get into this game for sport. I got into this game to be able to defend myself in any situation, so ultimately sport is not what interests me. I train for no limits, no restrictions. That is what led me down this path. So I respect the road that boxers took in the boxing community, but I am on my own journey here.”

That can be a lonely one, and he knows that, but he doesn’t necessarily agree.

“Maybe some people might consider it a lonely thing,” McGregor said. “Me personally, I consider it a beautiful thing. I love being here alone, traveling from country to country, beating up people from different countries. My last fight I beat up some kid from the favelas, and now I’m heading to Vegas to beat up some hillbilly from Missouri. It’s crazy to me and I love doing what I’m doing.”

McGregor’s ability to switch from introspection into fight-hyping mode is a beautiful thing in itself, and it makes him one of the most captivating figures seen in the sport in a long time. “The Notorious” one is a star, plain and simple, and regardless of your opinion of him, you can’t deny that fact. Not that he would dispute it.

“The numbers don’t lie,” he said. “I brought in the numbers for the Dublin show, and it was a phenomenal event and one of the most successful Fight Pass events. It makes perfect business sense (to have me fight in Las Vegas), and my employers are very intelligent businessmen. They know good business and good business is bringing the fighting Irishman to the fighting capital.”

It is, and it’s a big deal to McGregor, who, while clear in his desire to fight anyone anywhere, relishes the fact that he will cement his arrival to the world stage in Las Vegas.

“I’ll fight anywhere,” he said. “I’ll fight in this hotel room right now. If the money’s on the line, if the belt’s on the line, let’s do it. Anyplace, anywhere. But as I go through these experiences, I embrace these things. Fighting in my hometown, it was a dream come true, and of course fighting in the MGM is a dream come true. These are things that people who compete in combat sports dream of getting to. So of course I embrace it as it’s happening, but I’m trying not to get too caught up in it. I feel I really have tunnel vision through it all. I’m going along, doing my thing, taking note of where it is and being grateful for it, but ultimately, I’m there to conduct business, and whoever is in my way and wherever it may be, it makes no difference.”

So in the end, it’s all about the fight. And maybe that’s the appeal of Conor McGregor, that after all his talk and bluster, you will make sure you’re in front of your television when he’s in the Octagon. But according to him, this is just the beginning.

“You get to these events, and then you go ‘what’s next?’” he said. “You go forward and go bigger. There are no limits. The bigger the better. That alone inspires me to work harder than everybody and overcome every obstacle and adapt to every situation and evolve.”