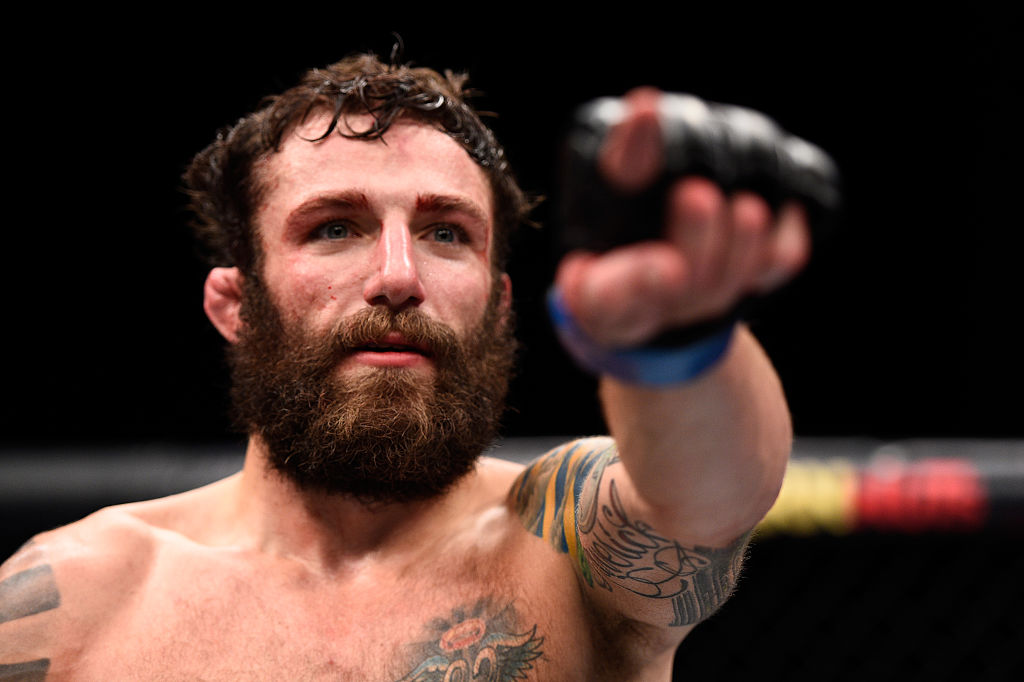 Michael Chiesa celebrates his win over Jim Miller on December 10, 2015 in Las Vegas, NV. (Photo by Jeff Bottari/Zuffa LLC)" align="center" /> They can rebuild him. Okay, it’s not as dramatic as Steve Austin becoming the Six Million Dollar Man, but Michael Chiesa does feel a lot different heading into his UFC 223 bout against Anthony Pettis than he did for his last one against Kevin Lee, or for any previous bout for that matter.

“I don’t want to sound cliché, so I’m not gonna say I’m in the best shape of my life or that I’ve reinvented myself or any of that,” Chiesa said. “I’m just gonna say that it’s like when you take apart a car and you rebuild the motor. You’ve got a great motor, but let’s take that motor apart and polish the head, let’s put some cams in there, let’s do some different things. That’s basically what we’ve done. We’ve taken what I’ve brought to the table through my six-year UFC career and kind of rebuilt it. I’m not reinvented, this is just the best product I’m gonna bring to the table.”

So where did this rebuilding of the “Maverick” motor take place? It wasn’t a cross-country trip from Spokane. Instead, he went south to Las Vegas, putting in a full camp at the UFC Performance Institute and with the Syndicate MMA squad. So with all the high-tech toys that measure everything to do with an athlete’s performance and take everything to a scientific level, has Chiesa lost that raw edge that endeared him to fight fans ever since he won season 15 of The Ultimate Fighter??

“If anything, it’s done the opposite,” he said. “I’m always gonna have that raw, wild style. But now, imagine a technical storm coming at you. I’m still gonna be the guy that just marches forward and makes it a dogfight, but now we’re throwing technique into the mix. On top of that, the conditioning and the preparation that I put in at the PI is only making me stronger, faster and more of a problem for these guys to have to deal with.”

Add in the fact that his longtime SikJitsu coach Rick Little and teammates Sam Sicilia and Austin Arnett also made the trip to Vegas, and Chiesa admits that “I had the best of both worlds.”

But would this have happened had he not lost his last bout to Kevin Lee in June of last year?

And as he gets ready for a main card bout against a former world champion on one of the biggest cards of the year, it’s clear that the No. 9-ranked lightweight hasn’t lost any luster after his submission defeat to Lee, one marked by controversy after referee Mario Yamasaki halted the bout without a tap from Chiesa. Is it better to lose like that, where there are some question marks, or to lose with no doubts as to who was the better fighter that night?

“In this sport, you want things to be left without question,” said Chiesa. “And with that fight and the way everything transpired as it ended, I’d rather just get beat fair and square. There are things to take away from that fight – I need to stop giving up my back in the first round, that’s a bad tendency I have in a lot of my fights, and there are habits that need to be broken. But when you have controversy like that, there are always these ‘what ifs’ swirling around. Where if you get beat fair and square, you hit the drawing board, you get back on the horse and get back after it.

“I got a loss on my record, but in my mind I didn’t get beat,” he continues. “There were under 40 seconds left; I was getting out of that choke and there’s always going to be a matter of opinion; some people will agree, some people won’t. But that’s the whole point. You don’t want that kind of stuff. It’s easier to move on.”

“I have a short-term memory. It’s behind me, I don’t dwell on it. I’ve got Anthony Pettis on my plate. I’ve got a former world champion that I’m gonna be locking horns with in a few days. I’m not dwelling on the Kevin Lee fight.”

Good move, as Kevin Lee won’t be in the Octagon on Saturday night. Pettis will, and despite a recent skid by “Showtime” that has seen him go 2-5 in his last seven, the stage is set for a stylistically pleasing battle with Fight of the Night potential. Chiesa believes that alone is a reason for the promotion to have this bout on the Pay-Per-View portion of the card.

“The UFC put me back in a position for an awesome fight,” he said. “I won the toughest season of The Ultimate Fighter, five bonuses, I’m an exciting guy to watch, and there’s a reason why you put me and Anthony on the card. I’m still in the running for the title and they know what I bring to the table. If you look at my three losses, only one guy (Jorge Masvidal) has really got me fair and square and he got me by a second.”

Hearing Chiesa talk like this, it’s clear that in spite of the loss to Lee and his new camp in Vegas, he hasn’t lost his fighting edge, and that mentality is what’s going to take him as far as he wants to go at 155 pounds. And he wants to go pretty far.

“This is the opportunity to fight a guy who has been in there with some of the best,” he said. “Of his (Pettis’ recent) five losses, three of those guys held world titles and one of them currently holds it still. And if I can go out there and do it better than those guys, that’s gonna leapfrog me closer to the title picture and I’ve got to do it big in a month that’s chock full of huge lightweight fights.”

So Maverick is still there?

“I fell in love with something, I pursued it as a hobby, it turned into a passion, and I fight with that passion,” he said. “I’m just a blue collar guy that put his nose to the grindstone and pursued something.”