“I want to make some good money and put on good fights. If that means being ready at a drop of a hat, then that’s what must be done.” - Donald Cerrone 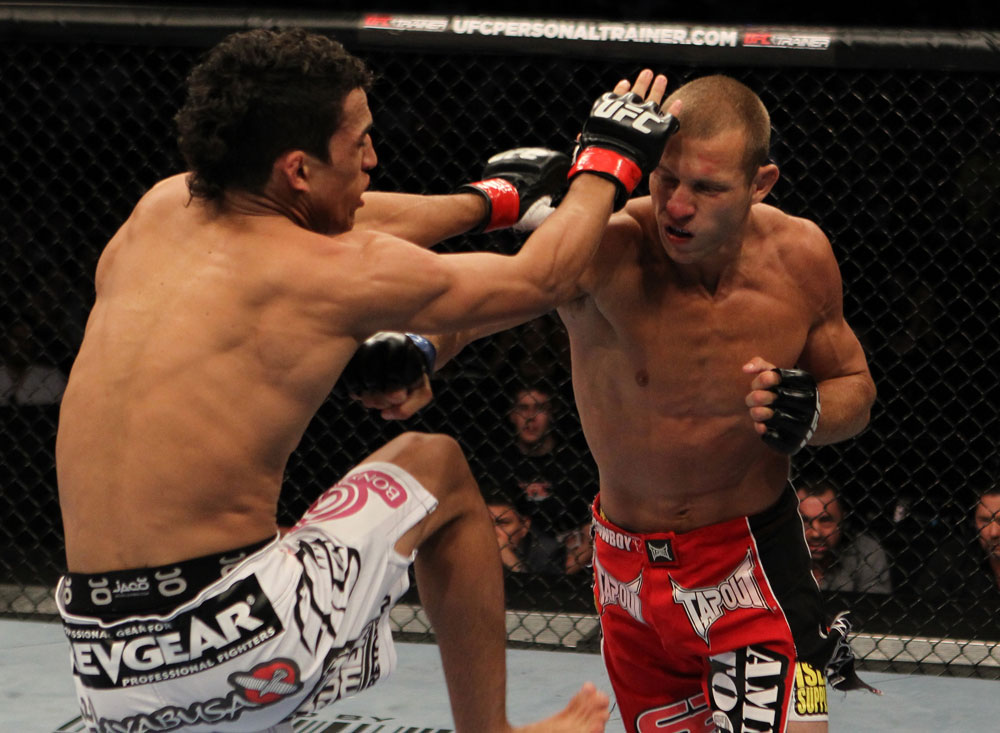 There’s something about Donald Cerrone that suggests he’s filled with attitude. He walks to the cage to Kid Rock’s “Cowboy,” wearing a confident expression that gives off a direct vibe: He doesn’t think, he KNOWS he’s going to win.

New York Knicks forward Amare Stoudemire once shared his definition of swagger, or “swag,” in a published interview. He called it the confidence knowing you work hard for success, a natural feeling and charisma that comes out when you know you’re at the top of your game. Cerrone has his own point of view: It’s a part of his persona and it is what it is. Those who like it, admire it. Those who don’t, just have to deal with it. To any opponent rubbed the wrong way, more power to the Cowboy.

“I’m not sure I call it swagger,” Cerrone said. “That’s just how I am. Some people like my boy Leonard (Garcia) love the interviews and the press. That’s not me, man, so people think it’s being cocky or arrogant, but I don’t think it’s like that.”

Call it brash, call it confident, or apply your own interpretation of swag, but understand that Cerrone has earned the right to walk tall. He’s a winner of five straight fights since a first round submission loss to Ben Henderson last year, and he has quickly moved into lightweight title contention with a series of impressive victories, including respective Fight of the Night and Knockout of the Night honors against Paul Kelly and Charles Oliveira. He also rebounded from that April 2010 loss to Henderson with WEC wins over former champion Jamie Varner and Chris Horodecki to start a run that takes him into his UFC 137 bout against Dennis Siver with a record of 16-3 (1 NC) as a replacement for Sam Stout.

A closer study of Cerrone’s resume reveals that he’s lost just twice in two years -- both to Henderson -- and 75 percent of his victories have come via submission. In Siver, he faces a lightweight on a 7-1 surge since his 2009 return to the UFC. Built like a tank and armed with a lethal spinning back kick, Siver’s dangerous standup proved superior in an upset victory over George Sotiropoulos that cost the Australian lightweight a title shot. Against Matt Wiman, Siver also proved he can grind it out en route to a decision win. In what can be viewed as a statement bout that will have future implications on the lightweight title picture, Cerrone has spent the last two months preparing for a bit of everything with the added pressure of being a replacement fighter.

“Jackson’s (MMA) has a bunch of good guys always getting ready, so it’s always game time over there,” Cerrone said. “The coaches are always good about game plans and analyzing the opponent. It’s up to me to apply it in the cage.”

Never shy about promoting his willingness to fill in on short notice, Cerrone steps in for Stout, who, still grieving over the untimely death of his trainer and brother-in-law Shawn Tompkins in August, withdrew from the match.

“I’m ready to go whenever I get the call,” Cerrone said. “I want to make some good money and put on good fights. If that means being ready at a drop of a hat, then that’s what must be done.”

In June, Cerrone was on the other end of making a sudden adjustment when Vagner Rocha was tapped to replace the injured Mac Danzig at UFC 131. Cerrone had only a month to prepare for the UFC newcomer, but all he did was open the pay-per-view broadcast by completely dominating Rocha -- tenderizing his lead leg like prime grade beef -- to earn a unanimous decision. While the win bumped his UFC record to 2-0, Cerrone left the Octagon unhappy over a habit that’s dogged him over his career. He’s often a notoriously slow starter before picking up steam in the later rounds, which hurt against Henderson and nearly cost him against a game Ed Ratcliff in December 2009.

“I warm up a little slow sometimes and it pisses me off,” Cerrone said. “My boy (Jackson’s teammate Clay) Guida goes out there and from second number one he is on fire. I admire that and want to be like that.”

Two months after Rocha, Cerrone destroyed Oliveria in just 3:01. His fight with Siver will be his fourth of 2011 and his development is accelerating at a rapid rate. While he’s been quiet preparing for the German lightweight, Cerrone is no stranger to trash talk. He’s verbally sparred with Varner and Danzig, and has made no secret about his disdain for Cole Miller, which was born four years ago following Miller’s win over his best friend, Garcia. Bottom line, he’s earned the right to be a bit cocky because he’s backed it up. Question it and he’ll throw it back in your face.

“That’s my philosophy 24/7,” Cerrone said. “Whether I’m wakeboarding, riding my Yamahas or kicking someone’s ass in the gym, I don’t really think that much about it. If the other guy gets messed up by my style, he’s in the wrong game.”

Call it swagger or arrogance, Cerrone prefers quiet confidence. For the Cowboy, who enjoys adventures in the Octagon, the ocean and on the bike, it’s a way of life.