“I see myself getting better every day and I know I haven’t reached my prime.” - Luiz Cane 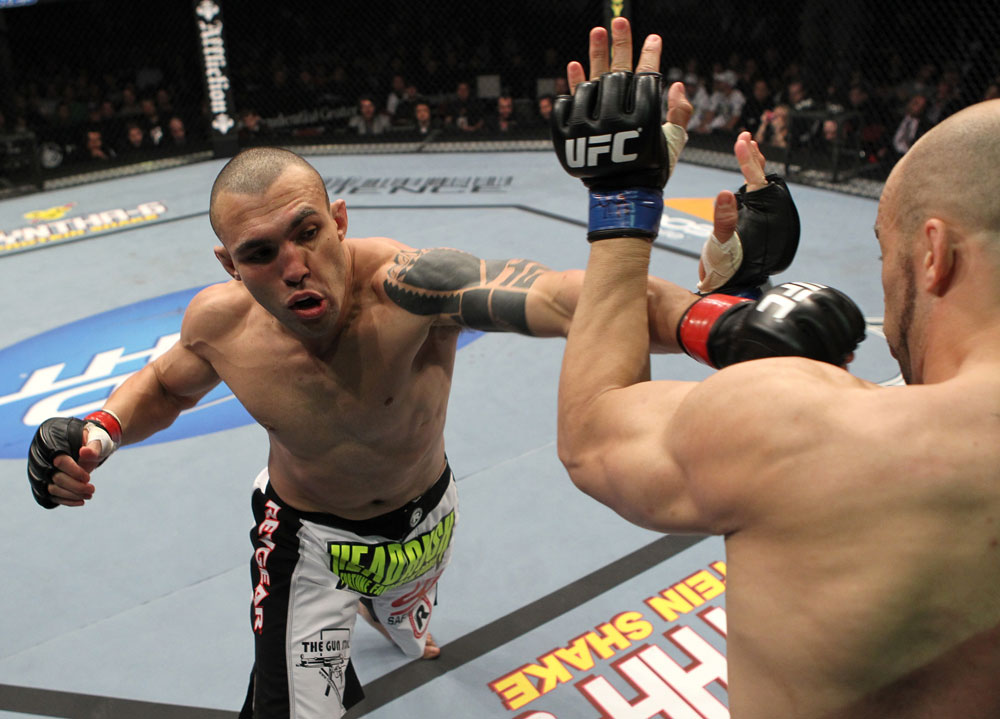 After two consecutive losses, both by knockout, the buzz on Luiz Cane had started to fade.

Initially the second coming of Wanderlei Silva, the hard-punching, free-swinging “Banha” brought a level of aggression to the Octagon that made him an immediate fan favorite.

Even his debut UFC loss, a disqualification defeat to James Irvin in December of 2007, was written off because the illegal knee he landed was just another example of the finishing rage he brought into his fights. He made it legal in the next two bouts, finishing Jason Lambert and Rameau Thierry Sokoudjou, before scoring a punishing three round decision win over Steve Cantwell.

But then came the defeats, TKOs at the hands of Antonio Rogerio Nogueira and Cyrille Diabate that put his future in the 205-pound title picture in doubt. But there was little doubt from Sao Paulo’s Cane, whose response to the setbacks wasn’t to tweak some things here and there. Instead, he underwent a complete overhaul.

“I changed the way I train, the way I eat, the way I take my career and my life,” he said. “I'm sure that those two losses made me a better athlete and a better person.”

Already having started the full migration to Florida for training camp, Cane solidified his team with the stalwarts at The Armory, which is also affiliated with Imperial Athletics and Pablo Popovitch’s Brazilian Jiu-Jitsu center, and altered his approach to the game. No longer would he completely abandon his gameplan once he got hit in an attempt to even the score; he knew that to make it in the UFC, he had to practice a controlled aggression.

The first victim of the “new” Cane was Eliot Marshall, who lasted just two minutes and 15 seconds with him at UFC 128 in March.

“I was in the best shape of my life and I was very confident that I would win that fight,” said Cane, who improved to 12-3 with 1 NC.

And in that less than two and a half minute outing, Cane almost immediately regained the luster he had lost in his previous two bouts. It’s the wonder of the fight game, where ‘what have you done for me lately?’ is the rule rather than the exception. And be honest, you can probably think of a half-dozen intriguing matchups for the 30-year old right off the top of your head. It will even get easier when you hear him say that “I see myself getting better every day and I know I haven’t reached my prime.”

That’s scary, and it makes this Saturday’s UFC RIO match with Bulgaria’s Stanislav Nedkov an even more intriguing one. Not only is Cane looking to build on the momentum of the win over Marshall while doing it in his first bout on home soil since 2006, but in Nedkov, he’s facing a wrestler and jiu-jitsu black belt. Cane’s history has shown him to be cruel to groundfighters, but when asked about this, he will simply say, “I'm very confident in my skills and in the training camp that I had. In my mind I have no doubts that I'll win this fight.”

If he does, and does so in typical Cane style, the sky’s the limit for him in a crowded light heavyweight division. He refuses to look that far ahead though, another key element of his fistic resurrection in 2011.

“I'm sure I'm ready for the next level, but I have a tough and dangerous fight in Nedkov,” he said. “So now I’m just thinking of him.”

In fact, the only future event Cane will discuss in depth is Rio, and he couldn’t be more excited to represent his sport back home again.

“I'm sure they (the fans) will see the biggest show in the UFC history,” he said. “They’ve never seen a crowd like they will see in Rio. I'm very excited for this fight and I'm very proud to fight for my people.”

Mature. Energized. Focused on the present and not the future. Meet Luiz Cane 2.0.