If there was one word to describe Montana De La Rosa heading into this weekend, it’s confident.

“I feel like I’ve put in so many sacrifices, went away from my family, brought great training partners like Lauren Murphy with me to Team Elevation, working with the coaches that I want to work with, and I’m really feeling great,” De La Rosa said. “I feel like I’ve made the sacrifices I needed to and I’m feeling confident and ready to step in there on Saturday.”

On the other hand, De La Rosa feels that her opponent, Maycee Barber, has lost some of the confidence that she used to have. The 23-year-old improved her record to 5-0 on Dana White’s Contender Series back in 2018, and then rattled off three straight victories in her first three UFC fights. Barber now sits at 9-2 after defeating Miranda Maverick last July by split decision, a verdict that was heavily debated. 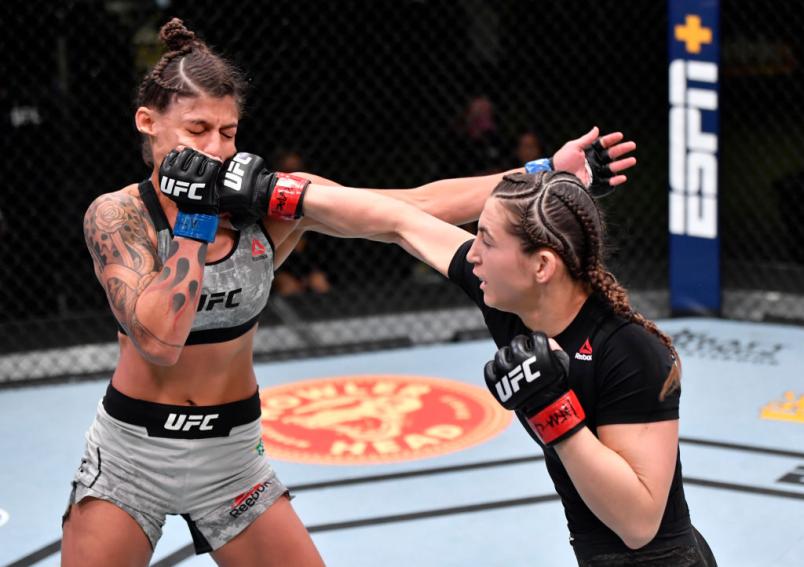 “I think she’s kind of lost some of her own confidence because her past few fights didn’t really go her way, even though she said she won against Miranda, I’ve watched that fight multiple times and I don’t believe that was her win,” De La Rosa told UFC.com ahead of her bout at UFC Fight Night: Lemos vs Andrade. “I think I’ll be able to take some of that from her.”

Through her first eight UFC appearances, De La Rosa has gone 5-2-1, most recently with an impressive TKO victory over Ariane Lipski last June. The 27-year-old had a longer layoff than she had hoped for after having surgery in October.

For De La Rosa, being away from the Octagon is what she needed to reset and get ready for this fight. 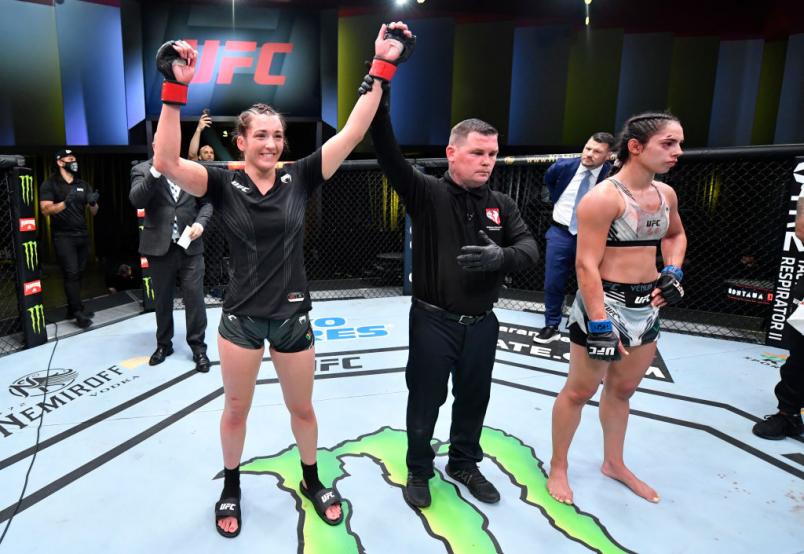 Montana De La Rosa reacts after her victory over Ariane Lipski of Brazil in a flyweight fight during the UFC Fight Night event at UFC APEX on June 05, 2021 in Las Vegas, Nevada. (Photo by Jeff Bottari/Zuffa LLC)

“I was just going, going, going fast for a while and I kind of had to sit back with that injury and just take some time to focus on my family,” De La Rosa said. “It’s nice to be able to get back in here and be 100 percent for this fight.”

The bout between these flyweights is one that has been in the back of their minds for a couple of years. The two were originally scheduled to fight in December, which brings even more anticipation for Saturday night.

“I think she’s kind of seen me for a while,” De La Rosa said. “I think she wanted to fight me right when she joined the UFC and we were both pretty young, but she’s been wanting to fight me for a while, which I think is cool that we’re actually going to be able to step in there because we’ve both been talking about each other for a while now.”

“I feel like she was the most dangerous when she was high on herself and just going out there and swinging and those girls didn’t know how to handle it,” De La Rosa said. “I think everyone kind of sees her gameplan now and she’s kind of pulled back on that and that’s where we saw a lot of shadowboxing from her because she’s not as confident in herself anymore.”

The two fighters combined have 16 total finishes, with De La Rosa accounting for eight submission victories and one knockout win. Put two fighters inside the Octagon that like to finish a fight and you never know what you might get.

But for De La Rosa, she’s looking for a victory and to take away the ranking Barber has and make it hers.