“And I ask myself, ‘Maybe I should retire?’ but I don’t want to retire right now, so I should get out there and prove them and prove part of myself wrong."
By E. Spencer Kyte • Dec. 28, 2018

The last few years have been a struggle for Carlos Condit both personally and professionally.

Inside the cage, the former WEC champion and perennial welterweight contender has suffered four consecutive losses, beginning with a controversial split decision defeat to Robbie Lawler in a welterweight title fight at UFC 195 and capped by his second-round submission loss to Alex Oliveira this past April.

Outside the cage, the 34-year-old father of two has gone through a divorce, and admits that some of those personal challenges had an impact on his preparation and performance in the Octagon.

“I had a bunch of stuff going on in my personal life that I think bled into my career,” said Condit, offering some insights on his recent struggles and why he’s returning to action once again this weekend at UFC 232, where he’s set to welcome Michael Chiesa to the 170-pound weight class. “I’ve got some of that settled, put some of that behind me and I have a freedom right now where I’m just doing this because I’m digging it and I’m loving it.”

Following his loss to Oliveira in April, the contemplative and forthright contender took to Instagram to share a message with his fans and express how he was feeling in the wake of a fourth straight setback.

Under an image from immediately following the stoppage where he’s sporting, as Condit called it, “a thousand yard stare,” the man known as “The Natural Born Killer” congratulated his opponent and acknowledged that he was unsure about what was next.

He questioned whether his time in the sport was up — which has been something Condit has openly talked about at each step during his two-year, four-fight struggle — while noting that his passion for training and competing has never and will never waver before promising a bloody battle should he eventually make the walk to the cage again.

Now here he is, eight months later, on the eve of crossing the threshold into battle once more, excited to compete and fully aware that talking about retirement and following it up with a loss isn’t doing him any favors.

“Every time I talk about retirement and then go out and lose a fight, it’s like, ‘Yeah, maybe he should retire,’” said Condit, laughing at the predicament he’s put himself in by being open and honest about his thoughts on hanging up his four-ounce gloves. “And I ask myself, ‘Maybe I should retire?’ but I don’t want to retire right now, so I should get out there and prove them and prove part of myself wrong.

“And then I’ve got kids, dude,” he added. “This is how I pay the bills and if I win, I get twice as much and if I lose, I get half. That’s a big deal and this is what I’ve done for a long time to put food on the table and keep my kids in good schools.”

As much as he carries those pressures with him into the cage this weekend, Condit has also used the eight months since his last appearance to get away from being singularly focused on his fighting career and working his way to the top of the welterweight division.

In the summer of 2017, Condit and his partners, Kaitlin and Ryan Hoskinson, opened Hundred Hands Craft Coffee, which specializes in nitro coffee — cold brew coffee sold in kegs and poured from a tap, just like beer. 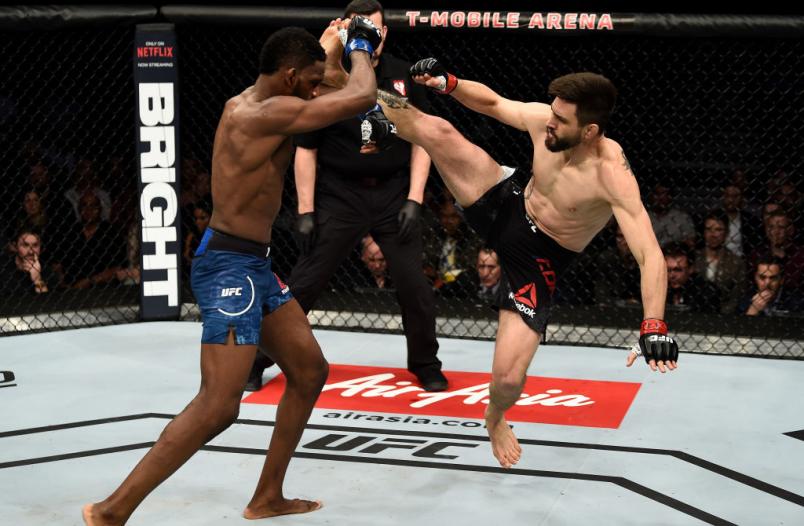 LAS VEGAS, NV - DECEMBER 30: (L-R) Neil Magny catches a kick of Carlos Condit and attempts a takedown in their welterweight bout during the UFC 219 event inside T-Mobile Arena on December 30, 2017 in Las Vegas, Nevada. (Photo by Jeff Bottari/Zuffa LLC/Zuffa LLC via Getty Images)

LAS VEGAS, NV - DECEMBER 30: (L-R) Neil Magny catches a kick of Carlos Condit and attempts a takedown in their welterweight bout during the UFC 219 event inside T-Mobile Arena on December 30, 2017 in Las Vegas, Nevada. (Photo by Jeff Bottari/Zuffa LLC/Zuf

Available in numerous locations throughout Albuquerque, plus a few spots in Santa Fe and wherever the Hundred Hands crew opts to set up shop, the venture has given the 42-fight veteran who made his pro debut with a submission win on September 6, 2002 a very different adventure to dive into and help take his mind off his fighting career.

“It’s been really nice to put my energy into something else other than being the best fighter in the world, which is what I was doing for my entire adult life,” admitted Condit. “It’s realizing ‘Hey — I have other abilities.’

“There is a lot of stuff that I learned in fighting and in this career that are applicable in other realms. Plus I get to be creative, get to meet people and get to drink a lot of coffee, so that’s sweet.”

But while growing the business and continuing to enjoy copious amounts of coffee are certainly part of his future, Condit’s immediate plans are to return to action on Saturday night and figure out a way to make Chiesa’s first welterweight appearance as unpleasant as possible.

“I’m taking it fight-by-fight right now and I’ve got an interesting matchup ahead of me — Chiesa is definitely a puzzle to be solved,” he said of the former Ultimate Fighter winner, who is shifting to the 170-pound weight class after an impressive run at lightweight.

Despite the fact that Chiesa arrives at UFC 232 on a two-fight skid, Condit knows he’ll have his hands full on Saturday night in Los Angeles and that’s a big part of what has him excited to make the walk to the cage once more this weekend.

“He’s well-rounded and motivated and young and believes in himself and is really coming into his own, coming into his prime, so how do I deal with that?” he said of Chiesa. “How do we dismantle that? How do we take dude apart and put him on the canvas?”

And while some fighters stuck in the midst of an extended rough patch would be quick to verbalize how sweet a victory would taste, Condit is only thinking about how to earn that victory.

“I don’t know; interview me after the fight and I’ll tell you,” he said when asked how good it would feel to have his hand raised inside the cage for the first time in more than three years. “I have no idea. I’m focusing on executing and winning some small battles in there that we know we’re going to have to win in order to win the fight and that’s it.

“It’s really just going out there and doing what I plan. I don’t know what it looks like afterwards because I’m focused on now and taking care of business.”

The one thing he can say, however, is that no matter what happens, Saturday’s matchup with Chiesa will leave fans entertained.

“Not boring — I can guarantee you that,” said the aptly nicknamed veteran when asked what everyone can expect when he and Chiesa collide on Saturday. “That’s the one thing I can guarantee.”