Carlos Condit is widely considered one of the most dangerous, well-round strikers in mixed martial arts.

“Carlos Condit is a nightmare,” Georges St-Pierre recently told Groundandpound-TV. “Of all the guys that I would not want to fight again it would be Carlos Condit. He’s very well-rounded and things can come out of every angle and from anywhere.”

Not a bad compliment to receive from one of the pound-for-pound greats. Condit was humbled by GSP’s praise, and said that his versatility as a fighter makes him so hard to deal with inside the Octagon.

“I think the reason why he said that is I am able to fight in any position,” Condit said in a UFC 195 media scrum at the MGM Grand on Oct. 21. “No matter what position you’re in you can’t relax. I push the pace. Even if you’re in technically a dominant position I still have the ability to finish or improve position or cause damage.” 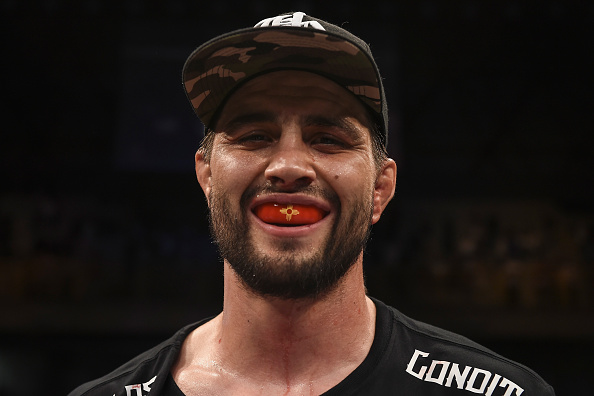 Thiago Alves of Brazil during the UFC Fight Night event at Arena Goiania on May 30, 2015 in Goiania.(Buda Mendes/Zuffa LLC)" align="right" />Damage is the perfect word to describe what’s to come when Condit meets UFC welterweight champion Robbie Lawler in the main event of UFC 195 on Jan. 2, 2016 at the MGM Grand Garden Arena.

Fans have been buzzing ever since this bout was announced between two of the most entertaining and lethal strikers in the sport.

Asked to assess Lawler’s game and compare it to his own, Condit smiled and said that he and “Ruthless” are both strikers that look to take their opponent’s head off.

“I would say I’m more technical and have more of a variety of strikes, but he probably has more power than I do,” Condit said. “He’s just really heavy-handed.”

Lawler’s power was on full display when he knocked out Rory MacDonald at UFC 189 in one of the most entertaining and gory UFC title fights in history. It was an impressive feat by Lawler as he became only the second fighter ever to finish the Canadian.

Who was the first? Carlos Condit.

Condit said it was incredible to watch his two peers leave everything they had in the Octagon at UFC 189. “As a fighter and as a competitor it was inspiring,” he said.

The laundry list of top fighters on Condit’s resume is staggering, but the Albuquerque, New Mexico native said Lawler is probably the most dangerous striker he’s ever fought. 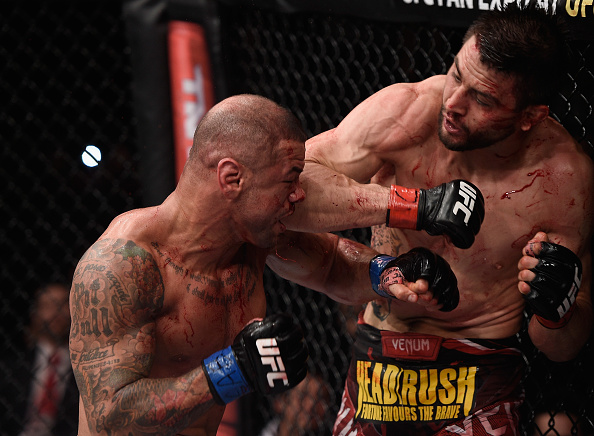 Condit went five rounds with St-Pierre back when he was the interim title holder in November of 2012. The sting of that loss still haunts Condit, who rocked GSP in the fight but failed to capitalize.

St-Pierre has been able to sit back and watch the fighters in the division from afar since he stepped away from the sport, and he feels Condit is the most dangerous challenge facing Lawler in the division.

“I believe right now, in the mix, that Carlos Condit might be the most dangerous guy,” GSP said in his interview with Groundandpound-TV. “He has more weapons in his arsenal.”

Although Condit now stands one win away from capturing the elusive title that has eluded him all these years, the future wasn’t always so bright. After suffering an ACL injury during his loss against Tyron Woodley at UFC 171, the path back to a title shot seemed further away than ever before.

But Condit has been in this game for 13 years, and has worked tirelessly to make it to the top of the sport. He turned his rehab time into a positive and a chance to work on the fundamentals of fighting again.

“When you’re in training camp you’re training for a specific opponent instead of working on your own personal growth as a martial artist,” Condit said. “In the time off I was able to focus on the things I needed to work on instead of game planning for a particular opponent.

“When I got hurt there was no doubt in my mind that I was going to come back and come back stronger. I just stayed focused and I never really got into a place where I was in despair. Injuries happen and you have to do your best to recover and come back.”

Now Condit’s knee is 100 percent. He doesn’t even think about the injury anymore. He looked better than ever in his return in May against Thiago Alves, finishing the “Pitbull” by knockout in the second round.

Next up is Lawler. Condit said it’s a fight that needs to happen and is sure to kick off the New Year in dynamic and entertaining fashion.

“To fight a guy like Robbie Lawler, who I consider one of the greatest warriors to ever step foot in the Octagon, is an honor,” Condit said. “To be able to possibly beat him and bring the belt home to Albuquerque would be incredible.”