Colton Smith: For the Troops

"I fight in honor of the men and women overseas, my brothers and sisters
who are on the front lines day in and day out, meeting an enemy face to
face. Those guys are the real heroes." - Colton Smith 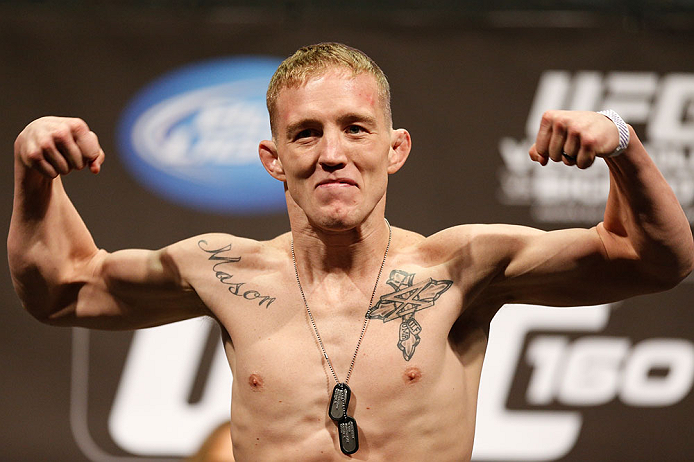 As much a member of the United States Army as he is a UFC fighter, it’s no surprise that the happiest man to be fighting on Wednesday’s Fight For The Troops card in Kentucky is Colton Smith. And even though the question that he will be asked a hundred times in the lead-up to his main card fight with Michael Chiesa is one of the most cliché, when you talk to him about how he feels about this upcoming bout at Fort Campbell, the answer comes straight from the heart.

“The UFC could put me on the biggest card of the year five times a year, on the main card with the biggest publicity, and it wouldn’t compare to being able to fight for the troops,” said Smith, an active duty Staff Sergeant. “This is why I fight, so I can show the world that an Active Duty Leader can chase his dreams as a non-commissioned officer as well as a UFC fighter. And I fight in honor of the men and women overseas, my brothers and sisters who are on the front lines day in and day out, meeting an enemy face to face. Those guys are the real heroes, and I’ve said it many times before: what they do is hard; what I do in the cage is easy, and I’m just lucky enough to be able to fight in the cage because they fight overseas. It’s because of my brothers and sisters in arms that I can do this. So I’m excited to give back to them.”

But in addition to fighting for the troops, being on national television, and having a fight that could propel him up the ranks should he win, this Wednesday almost marks a full circle moment for the 26-year-old Smith, who picked up fighting on a dare in 2008. Back then, whenever he fought, he brought the army with him – literally – and those days remain dear to him.

“It’s like when I first started fighting MMA,” he said. “My chain of command would come, my company would come, all my soldiers would come and watch me fight, and that was the best atmosphere I ever had.”

Five years later, Smith is an Ultimate Fighter winner, a member of the UFC roster, and a prospect with a high upside in the sport. And that upside got even higher when he revealed that he was leaving the welterweight division for the 155-pound weight class. For a fighter who was undersized against the 170-pounders, the trip to lightweight is welcome news. But to get there properly, Smith needed to put in a full-time training camp, and with the blessing of the U.S. Army brass, he got that opportunity with the Jackson’s MMA team in Albuquerque.

“Being active duty military, I have quite a few obligations as an Active Duty Leader, and the problem is not having adequate time to train,” he said. “And in order to go to 155, I had to have that time. The Army allowed me to train a lot more for this fight, and I’m more of a full-time fighter now, which I’ve never really had the opportunity to be, so the drop to 155 is that much easier when you can train more and more frequently. So I did two, three, four a days all throughout this camp with Jackson’s MMA. I took leave to go out there and train with all the best guys in the world. So 155 is my new home, I’m excited about it, my weight’s good, I feel energized, I’ll be one of the bigger 155ers in the world, and I’m very excited about that.”

And luckily for the Iowa native, who is stationed at Fort Hood in Texas, it looks like his association with Jackson’s may just be a permanent thing.

“Duty always comes first, and when duty calls, I’ll be there,” he said. “But as far as I know, the Army fully supports me because I’ve exceeded the standard as a leader and I continue to exceed the standard as an athlete in my extracurriculars, so so far they fully support me and I’ve done everything I can to make sure that my job is taken care of in the Army, as well as in the UFC. I’ve put all the time and effort I can into it, and right now, it’s just in the Lord’s hands, and I’m excited to be able to step into the cage in front of the troops and kick some ass.”

Against Chiesa, it’s almost a meeting of identical twins, considering that both are former TUF winners and both have gotten to this point with a combination of grit, heart, and determination, and not one glowing specialty in their fight arsenal. That’s the recipe for a three-round scrap this week, and not a boring one, but one with Fight of the Night potential.

“He’s a good guy and he’s a likeable dude,” said Smith of Chiesa. “I like this matchup and I know where I’m better than him at. But his X factor is his heart. He doesn’t quit, he keeps going after it, and I do know that I’m the more refined grappler, wrestler, and striker, but you can never count him out. I can see this fight going three rounds and being a bloody war, and I welcome that, especially in front of my soldiers and in front of the troops. I’m all about that.”

And if you ask Smith how he got here, he immediately deflects praise from himself and onto the Army’s renowned Combatives program, which unfortunately is getting hit hard due to budget cuts. Needless to say, Smith isn’t happy about this development, especially when he’s a graduate who is also a role model to other aspiring fighters.

“I’ll tell you right now, there are 20 other soldiers just like myself and (UFC middleweight) Tim Kennedy who are just as good, if not better, than us,” said Smith. “It’s scary. They don’t get afforded this opportunity because of deployments or because duty calls. But the Army Combatives program is unbelievable with the kind of people they put out. That’s where I came from, that’s where Tim Kennedy came from, and right now, the program is on the chopping block because of budget cuts. So this fight’s dedicated to a lot of things for me. Obviously my Christian faith is the biggest thing that I like to put on a platform, but I will say the Army Combatives program, as soon as I win and I get the microphone, you’re gonna hear a nice little message from me.”

Maybe that’s even more of a full circle moment for Smith than fighting with his brothers and sisters in arms around him. To come from the Combatives program, make it to the UFC, and now be in a position to let the world know that it needs some help, that’s a big deal to Smith, but Wednesday night is far from an ending. In fact, for him it’s just the beginning.

“I have only been fighting for a couple years, and I started training full-time just recently,” he said. “So it’s been a wild ride, it’s been fast, and it came quick. But I’ve stayed grounded, I don’t let the limelight or anything like that get in the way of my goals and my ambitions and my family life and my military life, so I’m blessed to be where I’m at, but it’s far from where I want to be. Winning The Ultimate Fighter was the first step, and there’s second, third, and fourth steps that I’m aiming for right now. My 300 meter target and my 25 meter target are right there, and I’m looking to take those down and keep moving up the ranks and keep getting better.”