Collin Anglin Is Out To Redeem Himself

A Disappoint UFC Debut Left Collin Anglin Eager To Get Back Into The Octagon At UFC Fight Night: Holloway vs Rodriguez And Get Back To His Winning Ways.
By Thomas Gerbasi, on Twitter: @TGerbasi • Nov. 11, 2021

When it comes to athletics, Collin Anglin has had a pretty impressive run as a former wrestler and hockey player, as well as a current member of the UFC roster.

But if you ask any runner about his wife Mary’s 3:05 finish in the 2021 Boston Marathon last month, they’ll say it trumps all of the above. And Collin may agree.

“Her dedication to it, the training she puts in,” he beams. “She doesn't take days off and then to go out there and exceed all expectations. I knew she was gonna do great; I didn't know she was gonna get a personal best. That doesn't really happen in Boston. To see her do that is so inspiring. Even watching her train and watch her put the hours and the work in, it's incredibly inspiring to me. I have goosebumps now just thinking about it.”

For those who don’t know, a runner can’t just show up in Boston and run the marathon. He or she has to post a qualifying time that is brutal for even the best of runners, and just getting to the start line is impressive. Running it in slightly over three hours is special stuff. It’s also something Mary’s hubby isn’t interested in.

“You'll never catch me running a marathon,” he laughs. “I'm an MMA fighter, but you're built differently if you run marathons. I’ll run with her twice a week, but the furthest I'll go is six miles. I'm good with that.”

Well, Anglin shouldn’t feel bad, because after those six miles, he’ll go and get punched, kicked and taken down by some of the best fighters on the planet in the Factory X gym in Englewood, Colorado. And when that’s over, he’ll do it again the next day, and the next, and you get the picture.

RELATED: Fight By Fight Preview | Fighters On The Rise | Max Holloway Isn’t Afraid of The Hard Path | What Yair Rodriguez Wants With All His Heart

It’s the life of a prizefighter at the top level of the sport, and while Anglin raced out to a 8-1 record and earned a UFC contract after defeating Muhammad Naimov on Dana White’s Contender Series in 2020, competing on that level for the first time in July left the Michigan native with the second loss of his career against Melsik Baghdasaryan. 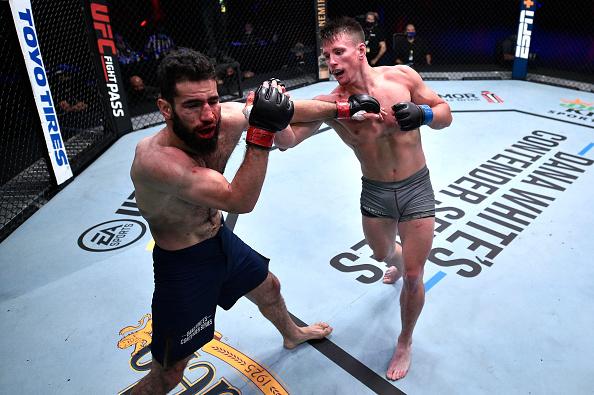 It’s not an unusual result for UFC debutants who not only have to fight, but also have to get used to the bright lights, the media, and the paperwork that comes along with those three letters on their four-ounce gloves.

“For your debut, it's kind of hectic,” Anglin admits. “You get there and fight week's a little different because you're running around and doing all this different stuff. You gotta go to the PI and take all the pictures and B-roll stuff, and I won't have to do that again this time because they already got it all. So that's nice. And I know what to expect as far as that goes and how they do it on fight day in the locker room.”

Yet despite all this, Anglin has no excuses for the loss. In his eyes, it just wasn’t his night.

“I went into that fight thinking I was fully focused and ready to go, so it didn't really affect me that I know of,” he said. “Who knows, maybe this fight I go in and I fight completely different and it's a great night for me, and then I can look back and go, 'Okay, maybe that stuff did mess with me a little bit.' But, right now, that last fight, I just wasn't able to get going. It was not really how I fight, and I'm not sure why that happened.”

It’s a mature assessment of that first bout, one you don’t hear too often for any loss in any sport. The 28-year-old credits early lessons for that approach.

“It’s probably just the way I was raised,” he said. “In wrestling and playing sports growing up, you lose a lot. I wrestled, played hockey and sometimes you have bad nights. Even in hockey, I would go out, feel great, play a great game, score three goals, and then the next night I would go out and play like s**t. The ride home, there were no excuses. You played like s**t, you just weren't feeling it tonight. Move on and you'll get 'em in the next game.” 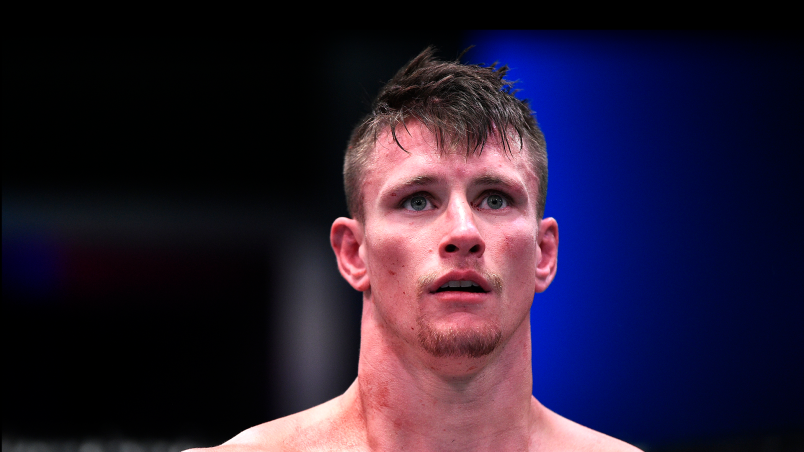 “It definitely hurt and losses will always hurt,” said Anglin. “If they don't hurt for a little while, I don't really think it's for you because you must not really have that drive and that care that I think you need to have. That fight...it still hurts. It sucks, it's a bummer, but I'm not gonna allow that bad performance to sideline me or ruin what I've got going on. You just have to be smart. If you sit there and dwell on it forever, and let it ruin your life for the next few weeks, you're not gonna really progress. I lost that fight, I had a bad performance, and that week I was on the phone with my manager, Jason House, and I was like, 'Hey, obviously I'm suspended, but I want a fight as soon as that is up.’”

The fighting spirit in Anglin is obviously strong, and on Saturday, he gets a second chance to make a first impression on UFC fans against Sean Woodson. But he isn’t interested in what anyone else thinks about his performance. This non-marathoner has only one person he wants to impress.