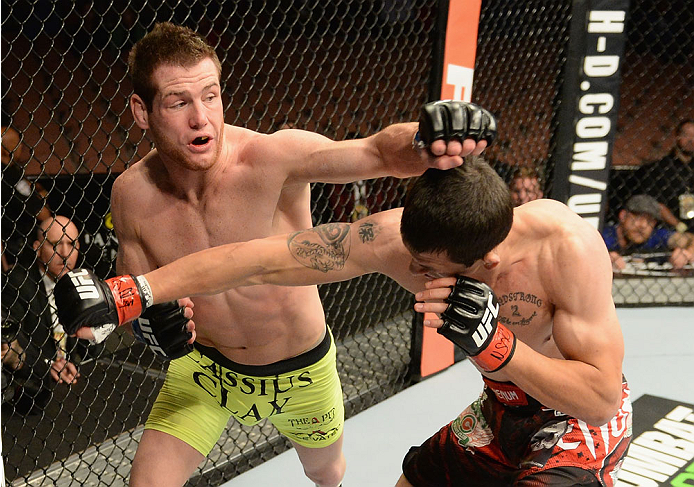 Two weeks before making his third Octagon appearance at UFC 188 in Mexico City, Mexico, featherweight “Cassius” Clay Collard was driving three and a half hours from Orem, Utah – where he trains at The Pit Elevated – to Wyoming, where his mother lives.

“My mom is going to miss my fight so I’m visiting her,” Collard said, his mother in the background chiming in with “It’s the first match I’m going to miss. Ever.”

After suffering a unanimous decision loss in a tough bout taken on eight days’ notice to the surging Max Holloway, Collard perhaps gained more fans in that loss than he may have with an upset victory win. He showed guts and heart after losing steam heading into rounds two and three.

Where most fighters could have given up a choke or a ground-and-pound position looking for a way out, Collard hung in and showed mettle when nobody would have blamed him for taking the easy out.

“There was no way I was going to give up,” he said. “Max is tough but I can guarantee you if I had a full training camp that fight would have turned out a lot different. But I wouldn’t change it now. People know who I am now, and what I can do. You saw a little bit in my fight Alex White.”

Collard took that one by unanimous decision, displaying a well-rounded mix of skills that included snappy kicks and dirty boxing against the cage, as well as some awesome combinations on the feet. He expects his bout against Benitez to look about the same.

“I always show heart in my fights,” he said. “I go out there and try to kill the guy. I’m a striker, hands down. I’ve been wrestling my whole life but I only use it to keep the fight on the feet. I love to bang. I love the speed and the aggression and being able to pound dudes until they can’t take it anymore.”

Collard is a student of the fight game. He says the only way to better his all-around game is to watch others, including featherweights Frankie Edgar and Conor McGregor.

“McGregor has some great boxing, he may be the best boxer in the division,” he said. “In my opinion, the McGregor – Jose Aldo fight will be the fight of the century, forget about Manny vs Floyd. I think McGregor will be able to hack Aldo up pretty good, and Aldo has been one of the pound for pound best for a long time now, so I’m really looking forward to that. If Conor wins, a fight against Edgar would be very interesting and probably a fight to really study for the rest of the division. I really admire Frankie, him getting dropped by Maynard and then coming back. I just like the way he carries himself inside and outside of the ring.”

Ten years ago “Cassius,” at age 11, was sitting at home watching the finale of The Ultimate Fighter with his mother. He was mesmerized by the Stephan Bonnar – Forrest Griffin fight, and at the end he turned to his mom and said “I’m going to do that. I’m going to be a UFC fighter.”

It’s that kind of support every athlete who aspires to become professional and aspires to greatness, needs. That’s the reason guys will take time out of training and go on a nearly four-hour ride to visit mom when he could be cutting some weight or fine tuning a combination.

“My mom has been here for me my whole life. She comes to all my fights and she can’t make this one,” Collard, who’s looking forward to going to Mexico for this fight, says. “I’ve never been out of the country, so I’m looking forward to getting some culture.”

As for his opponent, Collard says he’s not doing anything special to prepare.

“I’m going to go out there and just do what I love,” he said. “I get better and better under coach Jason Mertlich. That’s my home. I am confident in my ability to go out there and do what I need to do. Benitez is a forward pressure fighter. He doesn’t like backing up so by keeping up the pressure on him with a lot of hands and boxing he’s going to be overwhelmed. I’m going to bang him out until I win.”

Collard says he’s looking forward to putting together a few more wins, and when he’s ready to make a run for the title, he says the fans will get to know him really, really well.