Cole Smith Is Ready To Showcase His Skills

Making His UFC On Canadian Soil Couldn't Be Any More Perfect For Cole Smith
By Thomas Gerbasi • May. 3, 2019

Someday, we may look back at May 4, 2019 as the day one of Canada’s best mixed martial artists ever made his UFC debut. But that’s something that will only come with time for Cole Smith should he make it to such a lofty place in the sport.

But for now, we will have to settle for looking at Saturday night as the first time a fighter from Squamish, British Columbia, Canada, has stepped into the Octagon. And that’s just fine with Smith.

“The first fighter from Squamish, it’s a pretty big thing and I’m pretty stoked about that,” he said.

Smith describes his town, population 19,512 as of 2016, as “one of the most beautiful places in the world.” And when it comes to athletics, “The Cole Train” says Squamish has produced plenty of world-class snowboarders and skiers. But prizefighting? Not until now, and even with Smith, he didn’t start training until he was 20 years old.

“I’ve always been a natural athlete and I played tons of sports,” said Smith. “I have three older brothers, so you can imagine the competition. Just to eat, it’s a competition, so I’ve been beaten down my whole life for every stupid little reason. (Laughs) I got to a certain age where I’m like, I need to start defending myself. So I took up jiu-jitsu classes at 20 and it went from there.” 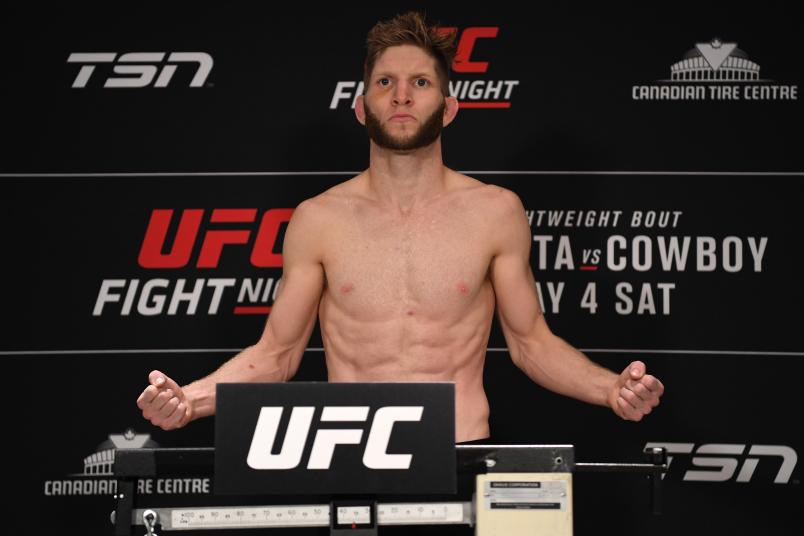 OTTAWA, ON - MAY 03: Cole Smith poses on the scale during the UFC Fight Night weigh-in at Andaz Ottawa Byward Market on March 03, 2019 in Ottawa, Ontario, Canada. (Photo by Jeff Bottari/Zuffa LLC/Zuffa LLC via Getty Images)

In the ensuing decade, Smith has earned a brown belt in jiu-jitsu, a green belt in Taekwondo, a 6-0 pro MMA record, a 1-1 pro boxing slate, and more than a dozen Muay Thai wins that weren’t built in North America, but in Thailand. And when you’re winning fights in places like Thapae Stadium, Kawila Stadium and Kalare Stadium, you’re the real deal, and not likely to be intimidated by anything you see in mixed martial arts. In fact, getting signed to the UFC, given an opponent (Mitch Gagnon), a date and a venue, along with plenty of time to train for the fight are all luxuries Smith didn’t exactly get in the Muay Thai world.

“When you’re competing out there, the thing is, you don’t get a face, you don’t get a name, you don’t get a weight class,” Smith explains. “It’s, ‘Okay, you’re ready to fight? You fight next Thursday, just show up and you’re fighting.’ Then you go to the arena and you’re looking around. Who am I fighting? They point and say, ‘You’re fighting that guy over there.’ You look at him, size him up, ‘Okay, that looks like a good fight,’ and you fight. You have no idea how many times he’s fought, you don’t know what his record is, you don’t have any information on him. So it does kind of prepare you mentally to take whatever’s coming at you.”

So what did Smith look for in an opponent when he went back to the locker room on fight night?

“Psychologically you’re always hoping that you’re bigger and meaner looking than the other guys,” he laughs. “But I fought guys that were bigger and meaner and looked tougher than me and I’ve come out victorious there every time. So you never know.” 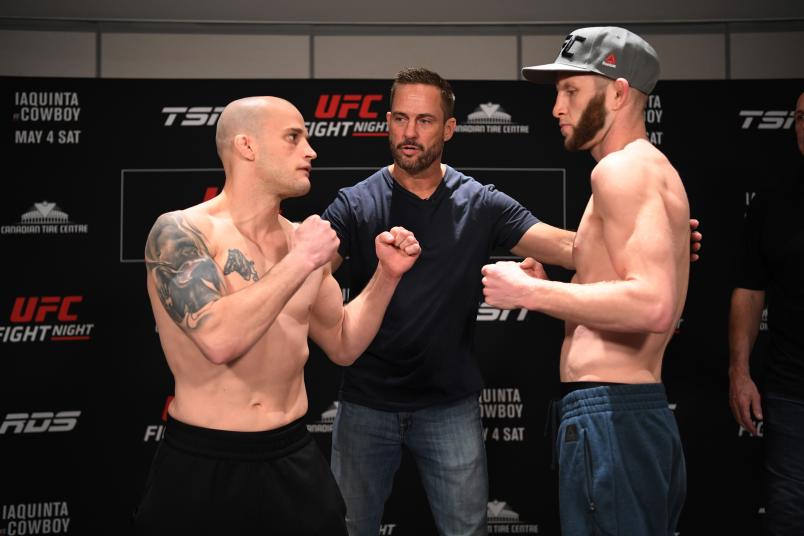 OTTAWA, ON - MAY 03: (L-R) Mitch Gagnon of Canada and Cole Smith of Canada face off during the UFC Fight Night weigh-in at Andaz Ottawa Byward Market on May 3, 2019 in Ottawa, Ontario, Canada. (Photo by Jeff Bottari/Zuffa LLC/Zuffa LLC via Getty Images)

It’s a fighting lifestyle that few of his peers can admit to experiencing. And Smith knows it. He also embraces that time, knowing that it steeled him both physically and mentally for his future in the UFC. He tells the story of former UFC fighter Will Chope, who moved to Asia and fought upwards of three times a month at one time. Smith wanted to live that life for a while, and during one 11-month stay, he went after it.

“I said, I’m gonna do what Will Chope does; I’m gonna fight as many times as I possibly can while I’m out here,” he recalled. “I think I fought about 15 times. I fought twice in a week before, and then after my second fight, the promoter asked if I wanted to fight the next day, and I accepted it, but some stuff happened so I didn’t get to. But just preparing myself mentally like that has been super beneficial.”

That’s fighting experience. And at 30, Smith has more life experience than a lot of UFC debutants. That’s an edge that can’t be overestimated when it comes to dealing with life in the spotlight of the big show.

“I’m a little more experienced in life at this point,” said Smith. “I moved to Thailand and lived there for a long time and I’ve had lots of fights. I’ve partied, I’ve done all that stuff and I’m way past that. I feel like now that I’m in the UFC, the hard stuff really begins. Now the professionalism really has to take shape and everything really needs to come together now. It’s easier to get distracted when you’re a little bit younger, but I have a beautiful girlfriend, she treats me perfectly and everything’s good in every sort of way with that, so partying and clubbing and all that kind of stuff is long, long past me.”

And his UFC career is now ahead of him. On Saturday, it all begins, and if Mitch Gagnon and the fans are expecting a 6-0 neophyte, they are in for a surprise.

“I’m ready to showcase my skills,” said Smith. “I’m a big 135-pound fighter and I don’t think people realize how big I am until they’re standing next to me. And again, Mitch has more fights in the UFC than I have professional MMA fights, but I’ve had 30 fights with all my combat experience together, so I am a lot more experienced than my record tells and I like that because nobody really knows.”