Though his professional career consists of only a handful of fights, Cole Smith is at ease in the UFC, where he always expected to end up.
By Thomas Gerbasi, on Twitter: @TGerbasi • Sep. 11, 2019

The fighting pride of Squamish, BC, Canada doesn’t have a long drive to Vancouver for this weekend’s fight against Miles Johns. And if you ask Cole Smith about it, you wouldn’t blame him if he didn’t get off his exit and just kept driving.

“It’s a 45-minute drive and it's all highway,” said Smith of the trip to Vancouver. “So as soon as you jump on the highway, it's such a beautiful drive. I'm on the side of the mountain, above the ocean. It's a really, really cool drive.”

Listen to Smith talk about his native country, particularly his hometown, and it makes you want to pack your bags and leave for the Great White North. But beyond his unofficial gig as Canadian tourism ambassador, the 30-year-old bantamweight does have a day job to tend to, and after a stellar run on the local circuit, he made the most of his promotion to the UFC in May by defeating Mitch Gagnon.

The first-time UFC jitters? They were hard to see that night, but Smith isn’t ready to dismiss them altogether. 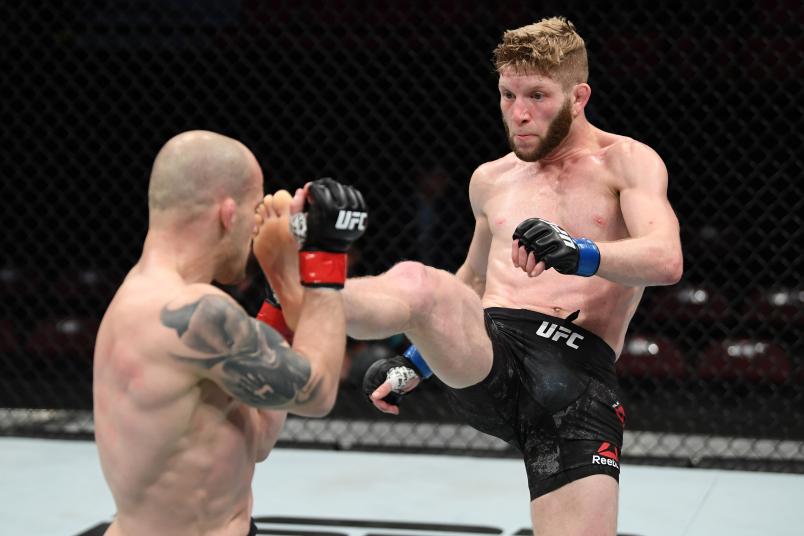 OTTAWA, ON - MAY 04: (R-L) Cole Smith of Canada kicks Mitch Gagnon of Canada in their bantamweight bout during the UFC Fight Night event at Canadian Tire Centre on May 4, 2019 in Ottawa, Ontario, Canada. (Photo by Jeff Bottari/Zuffa LLC)

“For sure there's a bit of jitters, but I felt like the only ones that were bringing the jitters were most of the media guys,” he laughs. “They're saying, ‘Why aren't you nervous,’ ‘You should be nervous,’ ‘Everyone's nervous in your situation,’ and I'm like, 'Dude, I'm all good.' I have the mentality that you only live once, so why not do anything that scares you and do it all. What's the worst that's gonna happen? The world's gonna keep going and keep spinning tomorrow. Just go out there and fight and have fun and that's the whole point.”

Smith had plenty of fun in defeating Gagnon to move to 7-0 as a pro, but more than just the victory, it was the reality that he was finally where he wanted to be. So what’s there to be nervous about then?

“One thing that I really embraced was the fact that I'm in the UFC now,” Smith said. “I've made it, I'm fighting with the best fighters in the world. Locally, I felt there was a little bit more pressure just because you can't lose to the locals and you can't lose a round to the locals. You have to dominate the locals if you want to get to the UFC. You need to be the best local. So all of my fights here, it was like, 'Okay man, you really need to beat these guys. It can't be close, it can't have a couple close rounds; you need to wipe these guys out.’ So I felt there was a lot more pressure on me to perform. And now that I'm in the show, the fighters are so good, it is what it is, so I figured that helped me a little bit.”

More UFC Vancouver: On The Rise | Public Events Schedule | Brad Katona Is On A New Level | Watch Cowboy vs Gaethje on ESPN+ | Fight By Fight Preview

With all that out of the way, Smith can now focus on the present and future, and the future gets brighter if he takes out fellow unbeaten Johns in the present. But regardless of the result, the stock of both bantamweights should rise simply because they took a fight that you would rarely see take place in a boxing ring. In other words, you don’t see two unbeaten prospects meeting this early on in their careers because there are too many records built to 20-0, 30-0, 40-0 in the sweet science.

“That would never happen in MMA,” said Smith of built-up records. “Every fight is tough, there's way too many ways to lose, and it's too hard of a sport. I appreciate the challenge in every fight, and here in Vancouver and in BC, we don't get easy fights. Every fight is tough and they're few and far between, so you can't pad your record out here. It's a little bit harder to do that.” 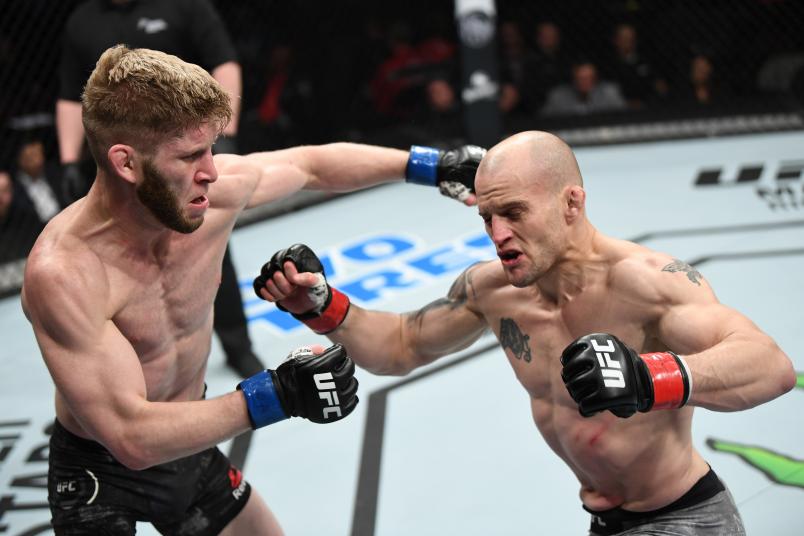 OTTAWA, ON - MAY 04: (L-R) Cole Smith of Canada punches Mitch Gagnon of Canada in their bantamweight bout during the UFC Fight Night event at Canadian Tire Centre on May 4, 2019 in Ottawa, Ontario, Canada. (Photo by Jeff Bottari/Zuffa LLC)

In the UFC, it’s nearly impossible, and that’s the way Smith likes it because he was built for this, whether on the local circuit in Canada in MMA or in Muay Thai matches in Thailand. That’s experience that’s hard to top, but there’s even more running through Smith’s head when he gets into a tough fight.

“I just remember all the ass kickings my brothers have given me,” he laughs. “If I could get through those beatings, man, I can get through anything.”

So don’t expect any second-time UFC jitters for “The Cole Train.” He’s a seasoned vet of the Octagon, even if it’s not on paper.

“I've been a UFC fighter before I got signed to the UFC,” he said. “Nobody knew it yet. I was there a long time ago. I've been putting in work for a really long time, I'm more experienced than most people believe and my record kind of leads on. So I've been confident that this is where I was gonna end up for a long time. I'm not surprised I'm here, I'm not shocked I'm here. It's what was supposed to happen.”