"After the fight is over, no matter what happens, as a fighter you want
to see a bigger number on the left side of the column than the right." - Cole Miller 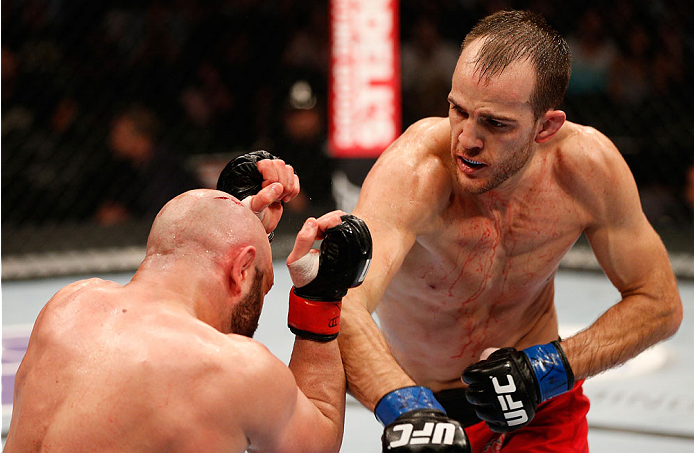 At only 29 years old, Cole Miller is considered a veteran in the UFC, and rightfully so. With 14 Octagon fights already under his belt, he continues to solidify his spot as one of the most experienced fighters in MMA. Yet to him, being in the UFC isn’t about just being there, but continuing to compile the victories.

“I have been in the UFC for quite a while now and there has been a lot I’ve went through over the years. But with this sport it isn’t about the amount of fights you have, but the amount of victories you obtain. Losing my last three out of four fights isn’t something that I’m happy with and you never know when you could be released.”

Being cut by the UFC weighs heavily on many of the fighters’ minds, and it’s always prevalent leading up to their next fight. With Miller however, he doesn’t believe the judges are living up to their expectations.

“I honestly thought I won my last fight,” said Miller of his controversial August loss to Manny Gamburyan. “The judging in MMA continues to become horrendous with each and every fight that goes to a decision, and I was affected by that in my last three fights.

“When I see these things going on, it doesn’t make me want to try harder; it makes me want to give up. I feel deterred, that nobody cares about what’s going on in this sport. But because I’m losing, people look at it as complaining. If I won my last five fights, people might listen a little bit.”

With the ongoing saga of judging fights, there are always two sides to the coin. Many fans hate when they go to a decision and want to see them ended well before the scorecards are collected. Miller disagrees.

“Sure, every fan and rostered member of the UFC wants a fight finished, but it isn’t always that easy,” he said. “It’s sickening because many judges haven’t trained any type of martial arts, or taken any type of qualification course to become a MMA judge. Things are not getting better, only worse.”

Well before he entered the Octagon, Miller joined The Ultimate Fighter for its fifth season. After the show, he earned his contract and took away a lot that he has applied over the course of his career.

“Going through the Ultimate Fighter when I did, when it was still practically new, was a great experience for me. What I got out of it is something you can’t get anywhere else. Sure the reality portion of the show is there, but living in that house is an eye opener. Things that have happened on the show cannot be duplicated.”

The mental and physical aspect is always discussed and bantered between fighters. With Miller’s opponent this weekend in Manchester, Andy Ogle, only being 23, the discussion is magnified.

“I think mentally I definitely have that edge, but physically it could go to him,” he said. “But the mental and physical aspects go hand-in-hand. With Ogle being so young and new to the sport, he hasn’t gone through the struggles that I’ve gone through within the sport. He doesn’t know what he is capable of yet, and I’ve been through things that he will probably never live through.”

Yet despite the struggles and hard times Miller has gone through, he only sees one thing in his mind that will affect his well-being and career.

“After the fight is over, no matter what happens, as a fighter you want to see a bigger number on the left side of the column than the right. Whether by decision or a decisive victory, wins are the only things that matter in the UFC.”