"I really want to put a stamp on this and have a dominant performance.” - Cole Miller 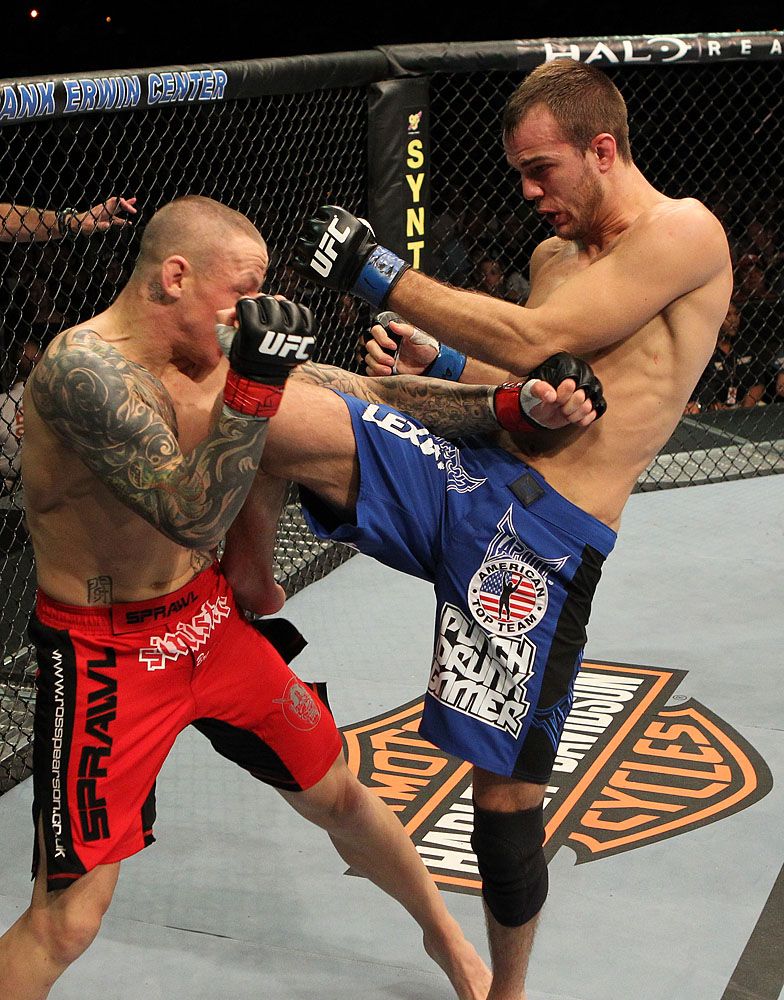 In 2011, Cole Miller has been making changes and he plans to make more of them.

It might not be visible on the surface, but Miller is a changed man. On August 14th in Milwaukee, Wisconsin, when he steps into the Octagon to face TJ O’Brien, on the outside Miller will still be the 6-1, skinny, lightweight with the dangerous submission game. But, on the inside, The Ultimate Fighter season 5 alum will be running high on something he says he hasn’t felt in a long time: motivation.

“I think for every fight you have to have some type of motivation,” says Miller. “You definitely need motivation, which is something I haven't had in the past year I would say. I've been winning fights, but I think I've been getting burned out mentally, and, on occasion, physically, as I've been dealing with some injuries.”

The watershed moment for Miller was in January at UFC Fight For The Troops 2 in a decision loss to Matt Wiman. Riding back-to-back wins that were also back-to-back “Submission of the Night” bonus award winners, Miller entered the cage against Wiman trying to put together his first three fight win streak in the UFC. Instead, Miller lost to Wiman in a fight he would simply like to forget. “I sucked that night and I'm trying to pretend that night never happened, like it was a bad nightmare.”

The first change the 27 year old made since the loss was getting back to having fun. “Something I neglected for a long time was personal hobbies,” admits Miller. It may seem obvious, but a fighter needs to give both their body and brain a break from fighting from time to time. “I was just fighting and training and that was it. I didn't really have things that I liked to do for fun, which is why I was feeling over-trained or burned out. I was like, I need to get some hobbies.”

The American Top Team star’s recreational activities range from playing video games to training for triathlons. Two of the hobbies that eat up most of the 17-5 Miller’s free time are rooted in a desire for completion. The first is his notable background in Brazilian jiu-jitsu. Miller is a brown belt under Ricardo Liborio, and rolling with a gi is not just fun for him, but he believes it also helps his ground game for MMA, despite what some critics believe.

“It undeniably helps your jiu-jitsu, period. The more you train in the gi the better your no-gi gets and the better your ground game for MMA gets. I try to think of it as a tool instead of no-gi versus gi. It's just a tool in your tool box. You might as well use it or it's going to get rusty. I'm a brown belt and I'm a better than average brown belt for jiu-jitsu. It is something I haven't mastered yet. It is something I want to get really good at. And when I'm not in a training camp, I can put the gi on and better my jiu-jitsu overall for gi, no-gi and MMA as well. Even when I'm in a training camp, I'll do one day a week of gi just to keep my game fresh and tight.”

The second hobby for the Georgia native is building out a Honda Civic hatchback into a street monster. “Some people paint, some people write poetry, and this is my canvas,” explains Miller about a 92-95 Civic that he is having a JDM K20A motor swapped into it. This project is especially cathartic, considering Miller was forced to sell the car when he moved to Florida to pursue MMA full-time, but was able to buy back the exact car years later. “I always try to see things through to the end and do them to the best of my ability. It was something that had been nagging at me. I wanted to complete this work of art and sit back and enjoy it.”

These additions have put Miller more at peace overall. Another change is that he aims to keep himself this way specifically concerning his approach to this fight with the 16-4 O’Brien. “I usually like to get to know my opponent and read their interviews and hear what they said and find reasons to hate them,” divulges Miller about what used to give him motivation for a fight, but this time the focus of the fight is on himself. “It's not really about me vs. my opponent for this fight. It's more about me vs. myself, which is different for me. For this fight the only person I really hate is myself for that last performance.”

As a fighter, Miller is known to be a finisher with 15 of his 17 wins coming by stoppage. That mentality hasn’t changed, but what he is trying to change is his wrestling. Don’t worry, Miller has no aspirations to grind out decisions, but he does want to be able to dictate where a fight takes place, so he can finish it there. “Magrinho” has 12 submission wins, including three “Submission of the Night” bonuses, and he is adept at using his reach while standing. But wrestling could be the key ingredient that takes his game to the next level.

“I think my standup is pretty good; the problem is that I can't wrestle. To keep a fight standing you have to have good takedown defense. I feel like I'll be doing pretty good and then bam I'll get taken down. I'll feel like I'm landing powerful strikes, knees up the middle, and boom I get taken down. One thing I've been working on lately is my wrestling. I'm trying to evolve and not get left behind. I'm trying to evolve so I can have a little bit more control of where I want to keep the fight going. I want to have to ability put someone on their ass and go use my jiu-jitsu, or keep it on the feet where I can box them.”

The next change Miller plans to make concerns his future in the UFC: dropping to featherweight.

“I would watch the WEC and I wasn't ever thinking about leaving the UFC and going to the WEC, but I was thinking sooner or later the UFC is going to add featherweights,” confesses Miller, noting that the move to 145 has been in the back of his mind for years. Now, the timing feels right. “I'm thinking about what is best for my career and where I'll be in contention. I feel like at 145 I'll have the same advantages I have at 155 and fewer disadvantages. I can compete at 155 and be competitive at 155, but I don't just want to be competitive.”

On August 14th at UFC Live, Miller will clash with O’Brien as he looks to get back to his winning ways. “I pride myself on being a finisher and you have to practice what you preach,” says Miller, making it clear that after an introspective year there is one thing that hasn’t changed: wanting to win. “I've got to go in there and show what I'm truly capable of and make a statement, especially if I'm going to be dropping down to 145 pounds next year. I really want to put a stamp on this and have a dominant performance.”