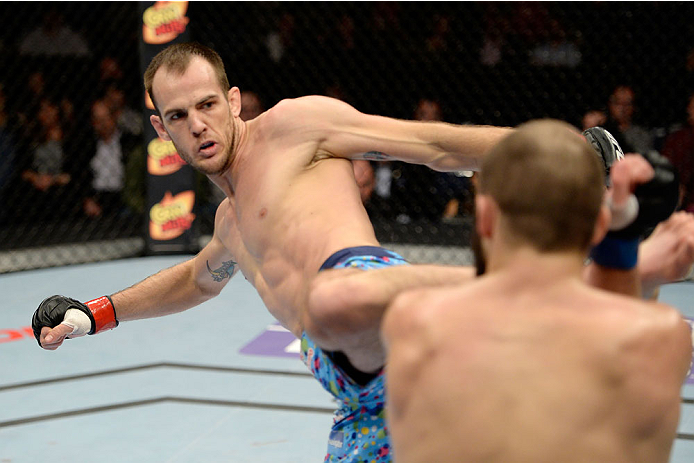 Cole Miller fought the best fight of his UFC career against Sam Sicilia. That was more than a year ago, and no one hates that fact more than a young man who knows the benefit of staying busy in this toughest of sports.

“What do we always talk about,” he asks. “Momentum, momentum, momentum. In 2013, I was able to fight three times, and even though it was only three times, it was back-to-back-to-back. Then I fought again in January (against Sicilia). When you have that momentum and have that activity, then it’s easy to get better at a faster rate. I had been working on some things, and not being injured for that spell of time was a big advantage for me and those things that I do in the gym I was able to make work in the Octagon that night (against Sicilia). I definitely felt like that was my best performance.”

Always known for his ground game, Miller’s striking attack has started to not just sneak up on people, but smack them in the face with a fist or a foot. The Georgia native was never sharper on the feet than he was against the dangerous Sicilia, and once he tagged him and stunned him, he let his jiu-jitsu take over, earning him a second-round submission win.

The victory was Miller’s tenth in the UFC, and second in a row at featherweight. A July 2014 bout with Conor McGregor was signed and sealed, but delivery hit a hitch when Miller tore a ligament and tendon in his thumb. Sounds simple enough, but it wasn’t.

“It was simply a freak accident,” he said. “You couldn’t have wrote it. I was training in jiu-jitsu, I had a guy mounted and he just went for a bridge bump and roll escape. I went to plant my hand and my thumb wasn’t able to make it out in time. It was tucked in and it caught where the seam of the mats stick together, and all my weight went down on it, and it snapped. I didn’t want to look at it because I was certain it was facing the other way.”

With the ligament and tendon torn, Miller couldn’t close his fist or grab anything, and the way he saw it, surgery wasn’t an option since he was told he would be out for a minimum of one year from the day of surgery. So rehab began, and now he will return on Saturday against Hawaiian young gun Max Holloway, who has won four straight, finishing each victory.

At this point, Miller’s latest injury is in the past, he’s a new father, and he’s in a co-main event in a bout that could propel him into the featherweight rankings. But the normally affable Miller isn’t exactly in a pleasant mood heading into Saturday night.

“When I go into training camp, I go into a very dark place,” he said. “I put myself in the worst kind of spot, which is why I get so emotional after these fights are over with.”

That means being away from his family in Georgia in order to train with American Top Team in Florida, and basically wondering why he goes through the torture of camp over and over again.

“When I got started when I was 19, I thought that 35 was a good number (to retire at), that 16 years of fighting seems like an abundance,” he said. “And now that I’m 30, I still have that same goal that I want to be done with this by 35. The surgeries keep piling up and the broken bones keep piling up and I can probably handle five more years of this and then I need to figure out something else.”

So what keeps him here? Miller isn’t seeking fame, he isn’t trying to sell more t-shirts with his face on them, and he isn’t looking to buy a mansion or a fleet of sports cars with his fight purses. He laughs when asked that question.

“I’ve been telling myself that I haven’t been wanting to do this since I fought Ross Pearson,” he said of the 2010 fight in which he picked up Submission of the Night honors while handing the Brit his first UFC defeat. “After that fight, I was like ‘f**k this, this sucks. I want to do something else.’ But I keep doing it. I don’t know. I think I do it because I still have a lot of work that I need to do, not just as a fighter, but as a martial artist and as a person. I’m still trying to develop myself in a lot of those ways and I think that I make a lot of progress by getting ready for these bouts and by training constantly.”

And after all the roadblocks and obstacles he has to navigate, eventually, there is a payoff, he will grudgingly admit.

“It’s the good days,” Miller said. “When you get that glory and you do get that money, that’s nice. But honestly, being able to take what you work so hard for and take what your coaches and your instructors are instructing you to do and being able to apply it at this level against guys that know what you’re going to do to them, and you still do it anyway, that’s the payoff.”

Cole Miller isn’t a prizefighter; he’s a martial artist. There’s a difference, and he knows it better than most. And for this martial artist to make it into the Octagon once more after all he’s been through, that’s a victory in itself. But he’s not satisfied with that alone. He wants a win, a finish, a bonus, and to go back home well enough to fight again in a couple months. Is that a lot to ask for? Not really.

“When it’s done, I’m happy as hell,” he chuckles. “I’ve got a paycheck and I’m all happy if I can get out of a fight without needing surgery or having something broken on me. I don’t like sounding angry all the time.”