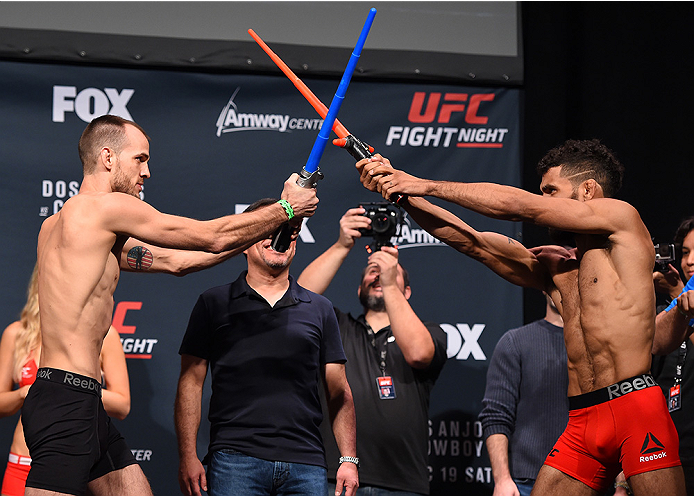 Cole Miller’s lightsaber duel with Jim Alers after the two weighed in for their Saturday bout pretty much gave it away. Mr. Miller isn’t afraid of a little fun when his gloves aren’t on, and that extends into a personal life where one particular video game series has become an obsession.

If you want a hint first, Miller and his girlfriend named their 11-month-old son Link.

Yes, it’s not Call of Duty or Madden that has captivated the featherweight standout since he was five years old. It’s Nintendo’s beloved Legend of Zelda series.

“I think it's just a complete game, and I like the idea of this hero,” he said. “The hero is Link and he has within him the Triforce of Courage. Once you get into the timeline, you're always Link, but you're a different version each time you play and I think that's cool too, that it stays with the same character. I also like the fact that the puzzle solving and the dungeons can be challenging sometimes, and the sidequests always have very unique, kind of comical and funny side characters.

“A lot of people have that nostalgia, and what do they want to play?” Miller continues. “They want to play the original Mario. But every single time a new Mario comes out or, in my case, a new Legend of Zelda comes out, it's almost giving you that nostalgia. Personally, I don't want to go back and play an 8-bit game, but I like playing as the characters I played with in 8-bit games, and that's probably another reason I'm so into the Legend of Zelda.”

At 31, Miller knows that there’s something to be said for going back to a simpler time, even if only for a couple hours through the wonders of technology. For him, when Zelda is on, he doesn’t have to worry about bills, work, training, or the idea that on Saturday night, Jim Alers is going to be trying to punch him in the face.

“I think that's why anybody games,” he said. “They want to immerse themselves in a different world, and I think that's why people get so heavy into this stuff. When the economy was going bad, the video game industry was escalating. Every year since the 90s, the video game industry has been going up and at no point has it been going down. That's a testament to how magnificent the quality of the product is.”

Among his peers, Miller isn’t the only one who hits the video game console for a little R&R. It’s usually not Zelda though, with first-person shooters and sports games being the usual targets. Several fighters, including Miller’s American Top Team squadmate Brad Pickett, have been known to be diehard players of multiplayer roleplaying games like World of Warcraft, but if asked to describe his gaming level, Miller says, “I would call myself a casual gamer, but I would say that I'm obsessed with the Legend of Zelda. World of Warcraft players, to me, those are the people who are the real nerds.”

“I'm a Legend of Zelda freak and I'm calling somebody a nerd. That's pretty hilarious. But when I go out there for some of those midnight (video game) releases, I see some really unique people. At first I think ‘I'm part of this group; these are my peers.’ But I can't fit in, I'm the outcast. (Laughs) I'm the one that's different.”

Miller doesn’t mind though, and he can’t wait for his son to get old enough to hold the controller in his hand and fire up some old school Zelda. That process has already begun.

“He's already been introduced to it because we dressed him up as Link for Halloween,” Miller said. “And his whole room has Link stuff and Legend of Zelda stuff in there.”

Sounds like Miller has laid the foundation of being the “cool dad” and that’s even before Link realizes that his father is a UFC fighter, another pretty cool notch in the belt. And while light sabers won’t be involved, fans are pretty interested in seeing what Miller and Alers do in the Octagon this weekend, especially since the two were both in the ATT gym in Coconut Creek before Alers’ recent move to the MMA Masters team.

“He trained alongside me every day because we both fought on that event in February,” Miller said. “It's business, but we have a friendly relationship. I've had to fight real friends before, and not that he's not a good person, but I haven't really got to know him. So we're friendly, but I never trained with him. I saw him every day and we'd greet each other every day, but he wasn't fighting a guy that was six-foot-one. I was preparing for (Max) Holloway, so I was fighting a guy with my build. So we never trained with each other. But all my training partners got to train with him and all my coaches got to train him. So I'm gonna have a little more of an inside look as far as what he was doing, at least, while he was still with us.”

At this point, things like that are often more a good storyline than something that will affect the fight. Miller has more than a decade invested into the sport and he’s seen it all. Alers is a young gun who is a likely a different fighter than he was the last time Miller saw him in the gym. In short, this is just a fight between two talented featherweights looking to end the year on a winning note. And that’s certainly the goal for Miller who has won two of his last three, with the only defeat coming via decision to Holloway. If he leaves the Octagon with a victory, “Magrinho” could be looking at a 2016 campaign where he’s back fighting top ten contenders and possibly making a title run.

“Yeah, if I can get rid of Jim,” he said. “I try to focus on one thing at a time. One training session at a time, one fight at a time. And right now I'll just deal with that. But now that you bring it up, if I should be able to do that and keep my body healthy, then I would like some real awesome fights real quick.”