Cole Miller: Bringing a Scrap Up to Boston

"I go out there and fight. and fight the way I think that I should." - Cole Miller 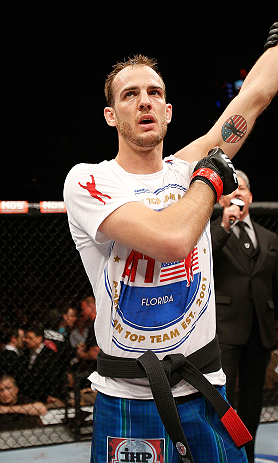 Six years and 13 fights under his belt in the UFC, and Cole Miller still has a passionate hunger for the scrap.

The rangy 29-year-old American Top Team fighter has developed a reputation during his time competing inside the Octagon as a fighter who always brings the ruckus to whoever the UFC decides to put across from him. Following his time competing on the fifth season of The Ultimate Fighter—an installment widely regarded as the launching pad for the most talented collection of fighters in the show’s history—Miller set about establishing himself as a force in the lightweight division.

While “Magrinho” experienced mixed results, the Georgia native consistently put on fan-friendly showings and managed to pick up five fight night bonuses along the way. Nevertheless, Miller sought out a change of scenery and decided to transition back to the featherweight division and compete at the weight he began his career at.

The immediate results were not what he was looking for, as he dropped back-to-back showings at 145 pounds, but Miller hung tough with his decision to remain at featherweight and bounced back strong in his next outing.

The submission ace added another victim to his list when he tapped out veteran Bart Palaszewski at The Ultimate Fighter 17 Finale back in April, ending a 20-month absence from the win column.

“I guess it felt pretty good,” Miller said about the victory over Palaszewski. “I probably wouldn’t have a job right now had I lost. That would have been three in a row. It is nice to get back into the win column. I had just received my jiu-jitsu black belt four months before that fight and it was really cool to get my first submission as a black belt and to tap out a Brazilian jiu-jitsu black belt as well.

“All the camps have felt great, it was just fight week and losing the weight. Each time it has gotten better. The last time was the best and the time before that was better than the first. My first weight cut down to 145 pounds was not so good, and following that pattern, hopefully this cut will be the best one yet.”

Miller will look to build off his victory over “Bartimus” when he faces former TUF housemate Manny Gamburyan at the FOX Sports 1 launch card for UFC Fight Night: Shogun vs. Sonnen. Much like his opponent on August 17, the 32-year-old Armenian judoka recently put himself back into the win column following a three-fight skid.

Both fighters are looking to establish traction in the featherweight division and their paths will finally cross in Boston. Where Miller is slow to call the connection to Gamburyan a friendship, he certainly holds the “Anvil” in the highest regard.

“It’s not really a fight I would want per se, or necessarily ask for, but when a name is given you just have to take it,” Miller said. “We are not friends in the kind of way where I call him on his birthday or anything like that, but we are friendly and talk when we see each other. I like Manny and I don’t have any kind of problem with him. I’m indifferent to it really. This is my job. This is what I chose to do. They say his name and I say okay.

“I’ve only had a couple of fights throughout my whole career where I didn’t really like the person I was fighting. It’s a lot easier for me to either hate the person or respect the person I’m facing. It’s really hard for me to fight someone I’m very close friends with. That would be difficult. But as long as I either hate them or respect them, it’s not a problem for me to get motivated to train. I need money, you know what I’m saying? I’ll fight whoever.”

While both Miller and Gamburyan have impressive grappling credentials, their differing styles should make for an interesting matchup in Boston. Miller has proven to be one of the most effective submission specialists competing in the lighter weight classes, while Gamburyan’s judo skills have played a major role in his ability to remain a dangerous threat in the featherweight ranks.

On fight night, when Miller and Gamburyan lock up in the ruckus, he believes the grappling advantage could be up for grabs.

“I’m a jiu-jitsu black belt, he’s a judo black belt, and he has been grappling a lot longer than I have,” Miller said. “When we were on the show together he gave me fits. That was back in 2007 and he gave me a lot of fits back then. He taught me a lot too. He taught me about footlock defense and a few other things and helped me with parts of my game that were weaker at that point in my career.

“It’s just different. It is not just a difference in style, but in our physiological makeups. He is a lot smaller, and with jiu-jitsu you are trying to tap the guy out with armlocks, leglocks, and chokes, but has no neck to choke and his arms aren’t very long for me to armlock. But we’ll see.”

As the UFC veteran heads into next weekend’s card, he will be looking to extend his reputation as one of the featherweight division’s gamest fighters. Miller understands Gamburyan will be stepping into the Octagon looking to put him away, and he has every intention of beating his opponent to every opportunity that opens up.

“All of my fights speak for themselves,” Miller said. “I have eight UFC wins, and all but one came by finish. I have a couple of Submission of the Night bonuses and a Knockout of the Night. I go out there and fight. and fight the way I think that I should. This will be my 14th fight and if people are clueless about what to expect, flip it over to FUEL TV. They have been showing my fights like crazy this month and you will get a good glimpse of what I’m about.”