Cole Miller: Back in GA

"I’m in there to fight, but I try to have that more technical style. He
does make it a dogfight, but we both have a dogfight mental attitude
going into it." - Cole Miller 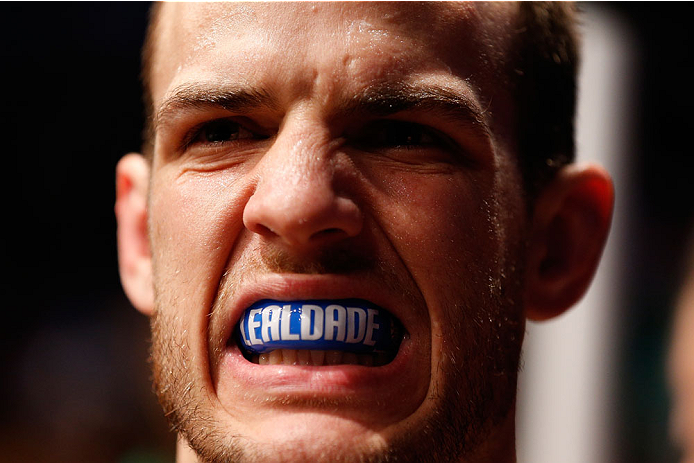 Cole Miller was gone. As fast as the Augusta native finished off Joe Germain with a guillotine choke 36 seconds into their 2006 bout at the Hi-Fi Buys Amphitheater in Atlanta, he was back in the locker room, having climbed over the cage before the official announcement of his eighth pro MMA win was made.

“I ran out of there kind of like BJ Penn (after his win over Caol Uno),” recalled Miller, “and a lot of people asked me why I did that. They said ‘oh, that was disrespectful.’”

“I don’t think they got it,” he resumes. “That was why I did it. I did it because it was disrespectful to him.”

More than seven years after the bout, Miller remembers all the details of the lead-up to his match with Germain, which marked his last fighting appearance in his home state until he heads into the UFC Octagon at The Arena at Gwinnett Center in Duluth this Wednesday to face Sam Sicilia.

“While we were sitting at this long table with the promoter, signing the contracts, he (Germain) said something to his coach, but he said it loud enough for me to hear,” chuckled Miller. “He didn’t say it to me, but it was for me.” > Watch: Miller finishes Dan Lauzon

Needless to say, the comment wasn’t complimentary, and basically centered on what Germain was going to do to his opponent on fight night. Miller, never one to sit idly by in such situations, filed the comment away and answered on fight night. When it was over, he simply left.

“It was a nice quick little fight,” said “Magrinho,” then just 21. This was after he joined American Top Team in Florida, but before The Ultimate Fighter or the UFC called. Regardless, Miller had found his niche in life. 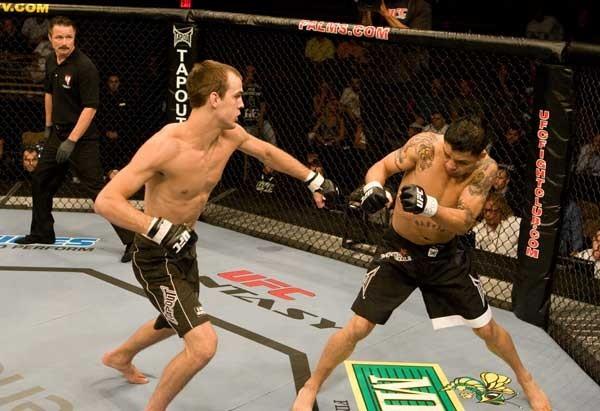 lightweight fights, and honestly I was not a lightweight – I was a featherweight. I was fighting at any weight between 145 and 155. But I was walking around at 152 pounds. At that point my dream was to be the Shooto world champ. That’s where I thought the pinnacle of my career would be.”

It was far from the local Georgia scene, where he made his bones fighting in promotions like Full Throttle, the North American Combat Challenge, and the Combat Sports Challenge. And that’s not even counting his host of amateur fights before he started to punch for pay. Let’s just say the fighting life wasn’t too glamorous at times.

“Once I fought in a ring that had a patch in the middle of it that was a completely different color. The canvas was off-white and there was a gray patch right in the center. And the venue smelled of cow manure because they had an animal trade show the night before. (Laughs) I fought in that, I fought in rec centers, but I’ve fought in the Mandalay Bay and American Airlines Arena too, so I’ve come a long way, and I’ve seen MMA come a long way, and how cool is that.”

Very, especially since the bout with Sicilia will be his 16th in the Octagon, an impressive nearly seven year run that nonetheless some thought was in danger of reaching an end after Miller lost three of four fights in 2012-13. One of those people was Miller, who made his peace with such a scenario heading into his match with Andy Ogle last October. In fact, he believes that training camps are easier after a loss than a win. > Watch: Miller subs Ross Pearson

“I find myself accepting that this is the end of my UFC stint and I gotta go back to working the minor leagues,” he said. “I kind of come to grips with that in the first week of my training camp coming off of a loss, and when I come to grips like that, I actually tend to fight better. I feel like coming off of a win is a little tougher, trying to protect the streak, and the expectations of people are a little harder to deal with coming off a win. I also feel like I judge myself so much harder. But when I’m coming off a loss and I already accept that I’m gonna lose my job and I’ve accepted every possible outcome, I think to myself ‘none of these people can judge me.’ All my peers respect me. When you’re fighting at this level, everyone knows that it’s just one mistake. So I don’t feel the pressure coming off a loss. It’s kind of backwards when you think about it, but it’s the honest truth.”

And Miller is an honest fighter, something that has been evident throughout his career, so while he defeated Ogle with a hard-fought and impressive unanimous decision in Manchester, England, the 29-year-old will put it in his book of positive memories for a reason you wouldn’t expect.

“I had a pretty decent training camp, but I had some health issues that made my weight cut extremely difficult,” said Miller, who was making his fifth start at featherweight after fighting his previous bouts in the UFC at 155 pounds. “Being able to fight that fight and then lasting more than one round and me coming out with the win instead of a loss in the first round was probably one of the most spectacular things I’ve ever done in my career.” > Watch: Miller finishes Junie Browning 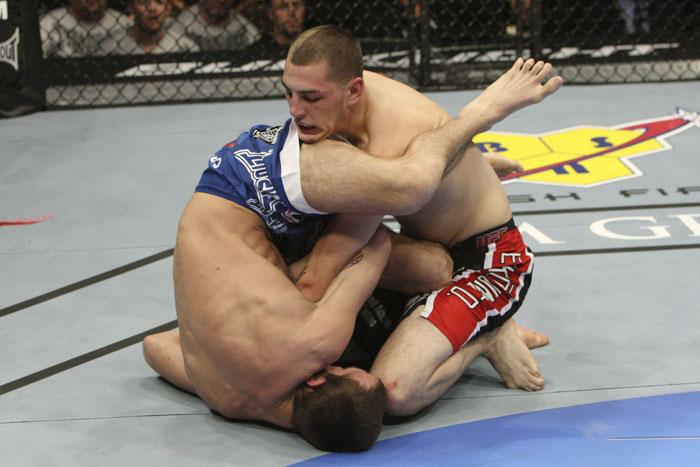 It was also a testament to the value of experience for Miller, especially when meeting a talented fighter like Ogle who was only competing in his third UFC fight.

“I remember at one point in the first round we had a light standup exchange where I cracked him in the opening 30 seconds,” said Miller. “I cracked him pretty hard with a straight right hand and I saw him wincing, and he started backing down from me. Then I hit him with three straight rights in a row and he forced a clinch. And when he rushed me to the fence, I created a couple angles where I was getting on to my side in one direction. He would change for a takedown attempt and then I would switch my hips to the other side. And while I was on the fence, I actually said to myself ‘okay, you need to slow this down because you cannot fight at this kind of pace for 15 minutes.’”

Guess this wasn’t something the “old” Cole Miller would have done?

“I would have just kept fighting, and then I would have probably pulled guard,” he laughs. “That’s what old Cole Miller would have done.”

The new Miller is here now though, and in keeping with his penchant for telling it like it is, he pulls no punches when it comes to breaking down his upcoming bout with the hard-hitting Sicilia, another TUF 15 alum like Ogle, but one with a distinctly different fighting style, one that Miller is certainly wary of.

“He’s the kind of fighter that I respect,” said Miller of his opponent. “He’s like the Rocky Balboa of mixed martial arts. You look at him and you see him fight, and you’re like ‘wow.’ You would never want to take a seminar from that guy, you would never want to pay money to learn  how to throw six guns and bricks from the hips like he does, but he makes every fight a dogfight. And that’s not what people call a fun fight. A fun fight for me is matching my technique versus another guy’s. I can get hit hard, but this is the kind of fight where the guy has no regard. He’s throwing anvils from his knees and he’s got one punch knockout power in both hands. He’s not in there to find out who the better fighter is; he’s in there to find out who’s better right then and there at that split second. And that’s not really the fight that I try to have or pursue, but we all know I can fight that fight. We’ve all seen me fight plenty of fights like that. It’s just not my preference.” > Watch: Miller's submission of Jorge Gurgel

But as Chael Sonnen famously says, when they call his name, he makes that walk to the Octagon, and Miller is no different. He may not be craving the possibility of tasting Sicilia’s power, but he accepts it as part of the job. He always has.

“I think mentally, we’re both in the same of frame of mind, which is why I think it makes for such a 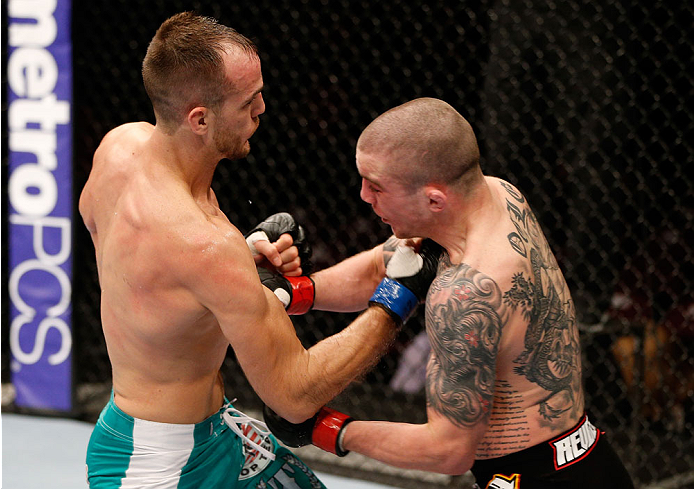 good fight,” he said. “You never saw me mentally break in a fight. You’ve seen me physically look like crap sometimes, and you’ve seen me take my losses. But I keep getting up and I keep coming. If I ever got finished, it wasn’t because I just stopped fighting; I was trying to move, trying to get away, or somebody just put me out. So I’m in there to fight, but I try to have that more technical style. He does make it a dogfight, but we both have a dogfight mental attitude going into it.”

As for that job, which took him from the rec centers of Georgia to the height of the mixed martial arts universe, Miller smiles.

“I’ve got a good job. It’s bittersweet and I hate it sometimes, but it’s a cool thing to have.”