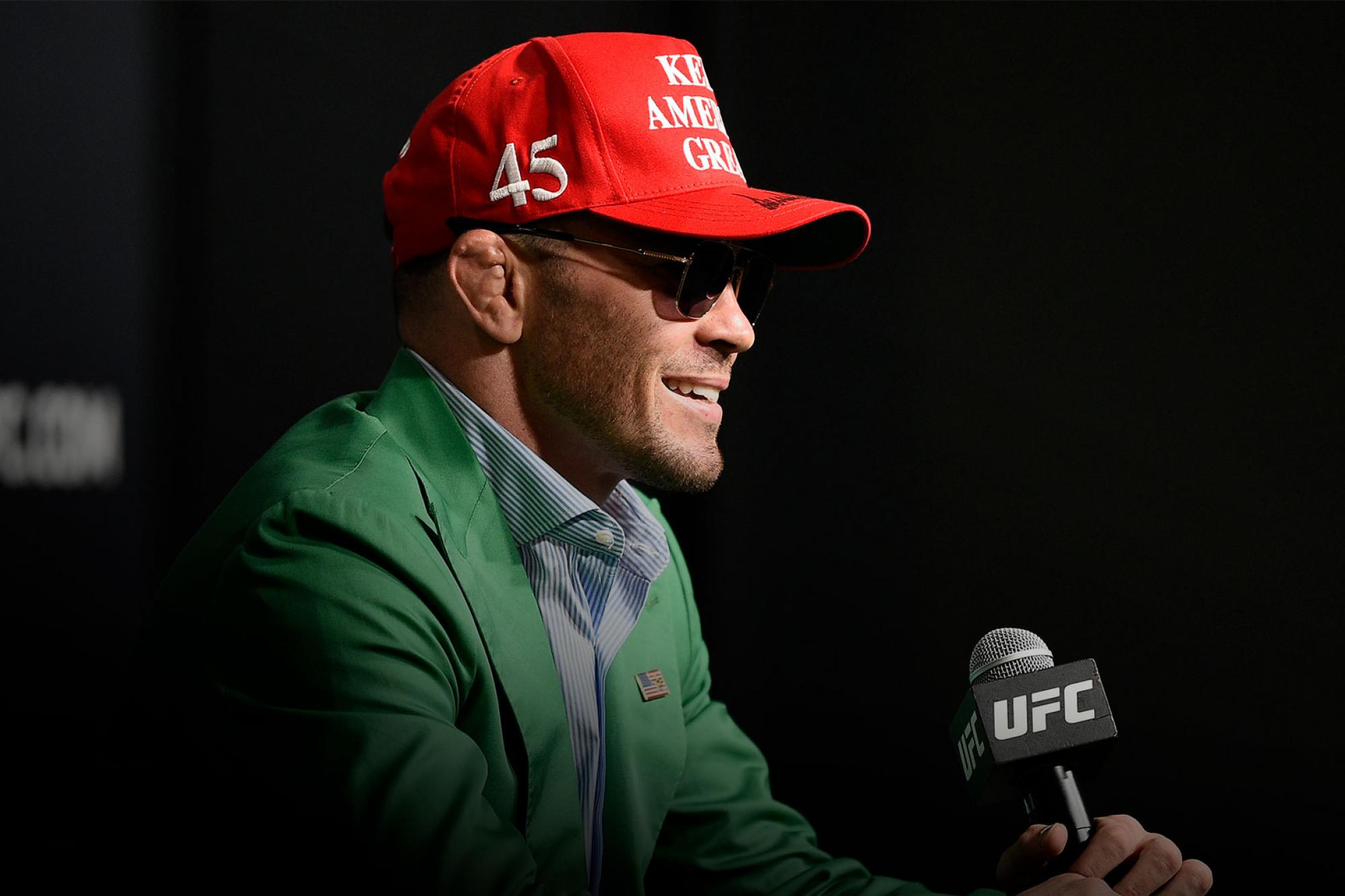 Colby Covington Is Here For Entertainment

Some fans love him and some hate him, either way Colby Covington just wants to provide entertaining fights that the fans pay to see
By Thomas Gerbasi, on Twitter: @TGerbasi • Sep. 18, 2020

I agreed, but also pointed out that he was warned before I asked it.

We both laugh about the question, which was as to the point as I get. Did the welterweight contender, who has polarized fans over the years, care what those fans thought of him, particularly after a 2019 Fight of the Year candidate with Kamaru Usman that may have swung some fans to his side after a courageous effort in defeat?

Tricky, especially for a young man who has taken pride in playing the villain, but he answered.

“I want to make the fans happy and I love entertaining the fans,” said Covington. “I know they pay their hard-earned money to watch us fight, so if they're gonna pay their hard-earned money that they earned the blue-collar way, I want to be able to deliver them a show and deliver them entertainment. Whether that's hating me or loving me, both are good emotions, and both are giving them their money's worth. But by the same token, of course I want people to love me and know what I'm really standing for and who I really am. I think in the last fight, it didn't go my way and there's a lot of controversy behind that fight. There's a lot of calls that I think could have gone another way, but besides that, I think people realized that they understand what I'm doing now. So all the people that wanted to say they hate me, I think the fans have turned and they know what I'm doing now and they appreciate what I'm doing.”

That’s true. It doesn’t mean that everyone has jumped on the Covington bandwagon, as the 32-year-old continues to poke at fans and fighters alike on social media, but the point is that when it came to fight against a heated rival for the 170-pound championship last December, “Chaos” showed up to win, came close to doing so, and gave an effort anyone could appreciate.

Nine months later, Covington returns to take on another rival in another bad blood grudge match in former champion Tyron Woodley. It’s a bout that’s brewing for years, and while the sniping between the two has been somewhat muted as of late, there is no question that Covington wants to make a statement in this Saturday’s main event in Las Vegas.

“I'm ready to close this chapter and I'm ready to be a man of my word,” he said. “I told the fans for the last couple years that I was gonna be the one to retire Tyron Woodley, so this is my opportunity to go out there and when they lock that Octagon, the truth is gonna come to light. He's not gonna have no more excuses. He's been saying for a couple years that I ducked him and that never happened. If anything, he should be thanking me because this is the most time people are gonna watch him and this is the last time he's gonna be relevant, fighting me.”

Yeah, there’s still a little fire there, and while it’s closing in on a year since his last appearance, Covington has never strayed far from the headlines, most notably when he left his longtime training squad, American Top Team, for MMA Masters, also in Florida. It was a major uprooting for the California native, but he’s happy with the change.

“It's been very good, honestly,” he said. “It's probably been the best transition and change of my life so far. This is an individual sport and I'm not with a big team where sometimes you can get lost in the shuffle with all the coaches and not being able to get all their time. Now I have coaches that work specifically and individually for me and we're centered around me every single day and trying to evolve my game every day so I can keep getting better and be the best me that I can be.”

That’s good news for Covington, but it was a risky move, especially considering that he left when he’s perilously close to winning the welterweight title. But he never felt that way.

“There was never that point because I knew how much drama there was going on in my old gym and how much fakeness was going on,” said Covington. “I just didn't like the energy, and it was wearing me down. I really didn't feel like I could get my full potential out of myself because every time I walked into the gym, I had to worry about watching my back or who was gonna be screaming at me that day because they were jealous of the spot I was in. So it was honestly the best decision I ever made in my life and I'm completely at peace with it and I'm very happy about it. Every day I go to train I'm motivated, I have people around me that give me that good energy, they want to see me win and I feel very fortunate and blessed for the way things played out.”

It makes you wonder if he ever thinks to himself that he should have made the move years ago.

“Every single day I tell myself that,” he laughs. “Why did I not do this sooner? This is not a team sport. This is an individual sport. We get locked in the Octagon, it's one-on-one. You can't sub in a teammate, you can't tell your coaches to fight for you. It's one-on-one and you need people around you that truly want to see the best out of you, and I didn't have that before, but now I do and that's why I'm ready to reclaim my belt.”

Of course, the former interim welterweight champion is not an angel in the whole American Top Team situation, as he got into verbal and social media battles with teammates Jorge Masvidal, Dustin Poirier and Joanna Jedrzejczyk, among others. So maybe the split was the best move for all involved. It definitely was in the eyes of Covington, who believes he will surprise some people with the evolved game he brings to Vegas this weekend.

“I think the storyline, the angle now, is so much more intriguing to the eye,” he said. “A lot of people expect me to fall off and have a drop in my game. ‘Oh, he left this big gym and he's not gonna be as good as he was,’ but they don't realize that it's gonna be the other way around. Now you're gonna see massive improvements in my game, now you're gonna see a hungry Colby Covington who's ready to come back and show the world that I'm better now. I have better coaches around me, I have coaches that are truly in it for me. They're not in it just for the paycheck, they're truly in it because they want to see Colby Covington 2.0. I think that storyline is so much sweeter now. And it's gonna show on September 19th.”

If the Woodley that showed up in losses against Usman and Gilbert Burns shows up again, Covington may just be right. But if the “old” Woodley is back, letting his hands go and fighting the way he did when he ruled the 170-pound weight class, another Fight of the Year candidate could be on the cards. What does Covington expect?

“I definitely expect him to be the best Tyron Woodley we've ever seen, the guy that was the champion of the division that claimed to be the best welterweight of all-time,” he said. “I feel like he's gonna come in hungry for this fight. His last two fights, yeah, he got beat by decision, but no one's finished him and if I go out there and finish him, that puts an exclamation point on my fight and shows that I'm ready to get my belt back. This fight brings out a lot of animosity and a lot of hatred and a lot of motivation to go out there and prove all the doubters wrong, so I expect to see the best Tyron Woodley.”

The best Woodley versus the best Covington will be epic, and the winner will certainly have a case for a title shot after Burns and Usman meet. Covington, not surprisingly, doesn’t want to wait for another crack at the champion, and I’ve got another question for him. And it’s not a trick one. Simply put, if he gets that undisputed belt, does it matter who he takes it from, or does it have to be Kamaru Usman?

“A hundred and ten percent, it needs to be from Usman,” said Covington. “If anybody beats him before I beat him, then I'm not gonna be able to live with myself. I watched that last fight a hundred times and a hundred times I've seen that I'm clearly the better fighter. I was clearly winning four out of the five rounds up until the bad stoppage (Ed. Note – Usman and Covington were up 3-1 on one card apiece, while the third judge had it 2-2 going into the fifth round), where I was still completely in the fight. For someone to beat him before I beat him would be so bittersweet; it wouldn't feel right if I came and won the title from someone other than him. So I'm looking to jump the line September 19th, finish Woodley and get my rematch with Usman because the fans want to see that. This is a war. That was one battle, but what about round two, a sequel and then a trilogy? I'm coming for Usman.”