Colby Covington: Back to Business

"I want to put a pressure and a pace on someone that's so hard and so tough that they can't respond and they want out." - Colby Covington 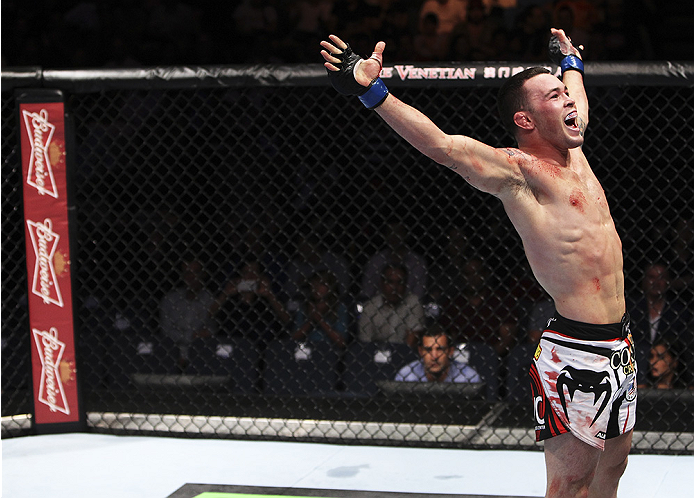 A UFC win is always cause for celebration, especially when it’s your first one. But it’s hard to remember anyone looking as happy as Colby Covington after his debut victory over Wang Anying in August. So what was going through his mind as he walked around the Octagon in the seconds following the second round stoppage?

“I have a stable life now and I can fully commit to fighting,” the unbeaten 26-year-old said. “I usually don't ever get excited for anything. All my fights and all my wrestling matches, I walk off without a smile on my face, no emotion. Because otherwise it makes it look like a big deal that you beat the person, but I expect to win every time I go out there. But this was different because I've been through some injuries, I've broken both my hands and was out for a couple years and I've been real broke. So it was something that said I'm here and I'm here to stay. It was an overwhelming feeling.”

For those who don’t fight, it may be hard to understand just what the call to the UFC means. To be a UFC fighter means you have a level of security you didn’t have before. You know what you’re getting paid before a fight and you actually get that check when the fight is over. If anything, you may get more money if you win and / or pick up a bonus. In the crazy world of combat sports, being UFC fighter is often the difference between having to work a second job and being able to compete and train full-time.

With his sixth pro win, Covington had that security, and now as he gets ready for a Saturday fight in Uberlandia, Brazil against Wagner Silva, all he needs to do is worry about the fight…and competing in his second road game after beating Wang in Macao, China. And though it would be nice to get a fight at home in the U.S., the California native isn’t about to make noise about it.

“I don’t want to be a guy to complain or ever make excuses,” he laughs. I’ll take what they give me.”

After having his first five fights Stateside, Covington has now been outside the country for two straight, but having been through the process once in China has helped him the second time around.

“I think the difficulty is just getting together with the schedule over there,” he said. “China was real tough to find the right foods for the diet. A lot of the foods are real salty, so it made the weight cut a little bit harder than it had to be. But those are just challenges you work with, and they’re meant to be overcome.”

And in Uberlandia, as a member of American Top Team, he’s had plenty of Brazilians, including head coach Ricardo Liborio, telling him what to expect in Brazil.

“That’s helped a little bit,” he said. “They give me an idea of what to expect and I’ve got Ricardo Liborio who will be there, so he’ll be able to show me around.”

Yet even the presence of Liborio probably won’t get the fans on his side since he’s fighting a Brazilian.

The fact that Covington shows up with the intent to finish his opponent each and every time won’t hurt his appeal either. And while his record shows four submission wins, two of those victories were by submission due to strikes, showing that the former Oregon State wrestler takes pride in not just winning against, but breaking, his opponent.

“In my wrestling career a lot of times I would put a pace on guys in that first round and they quit on me,” he said. “They would just put their head on the mat and let me pin them. That was a sign of breaking them and that's what I kind of live off. I want to put a pressure and a pace on someone that's so hard and so tough that they can't respond and they want out. That's the best feeling and that's what I want to do every time.”

And after knowing what it’s like to break an opponent, Covington admits that it’s not the way he ever wants to go out.

“That would be the worst way to lose, but that will never happen, I can assure you that,” he said. “I train so hard and I'm so well-conditioned that I just know that I have an edge over a lot of people in the mental area. I know how to turn the intensity up, and if I need to pull back a little bit, I know how to save some too. It's just something I've developed through my years in wrestling.”

It’s impossible not to be excited about where this welterweight prospect could go in the coming years if he stays on the path he’s on now. Yet despite the increasingly loud buzz around Covington, he’s turning a deaf ear to it.

“I don't really pay too much attention to that or think about that,” he said. “I don't ever let hype or any of those factors ever get in the way of what I'm there to do and that's to do my job. So I don't really worry about that. I worry about putting on the best performance every time I step in that cage.”

In fact, the only thing that could hinder Covington in the near future is impatience, and he admits that wanting to zoom up the ranks sooner rather than later is a concern.

“That's been the challenge I've been trying to throw around the last year or two,” he said. “I honestly know I can compete with anybody in the world right now at this very moment. I can step in and feel comfortable if I was fighting (UFC welterweight champion) Johny Hendricks. That's just how I feel. But I know that I'm young in my career, so my managers and my coaches and team, they want me to build up slowly. I still need a lot of experience. I've only had six professional fights, so I'm still new to this game. But it's tough. I want to have that balance and I definitely want to be the most prepared I can be when it comes, and I am getting better every day. I'm working on my stand-up hard every single day. I feel like I'm a complete fighter now, and my jiu-jitsu's coming along very well too. I just have to listen to my team and my managers and they're telling me 'let's take this slow, let's build up.' But in my head, it's hard because I know I can compete with anybody.”

So will we see a Covington celebration again Saturday night?

“No, definitely not,” he laughs. “It was a great feeling getting a win inside the UFC, the greatest organization, but it's just one step of many to come.”

In other words, it’s back to business.