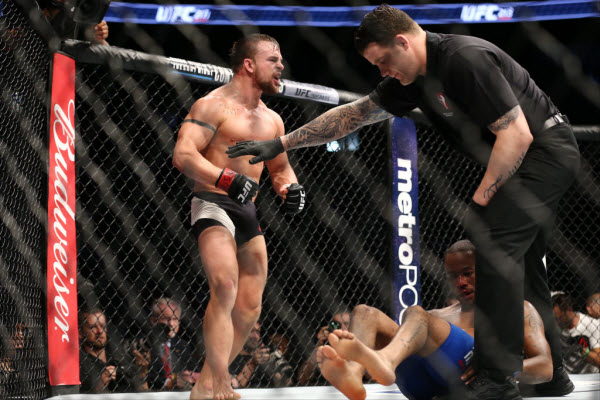 Cody Stamann celebrates after his bout against Terrion Ware during the UFC 213 event at T-Mobile Arena on July 9, 2017 in Las Vegas, Nevada. (Photo by Rey Del Rio/Getty Images)" align="center" />Cody Stamann was ready. After compiling a 14-1 record with eight finishes, he was just waiting to be called up to the UFC after an April stoppage of Zac Church.

“I definitely felt like I paid my dues,” he said. “I fought some real tough guys that could easily be in the UFC, and I was coming off two really good finishes so I was thinking it’s gonna happen at any point.”

It did. Eight days before UFC 213 on July 8, Stamann was contacted about facing fellow newcomer Terrion Ware in Las Vegas. He accepted the short notice assignment like any hungry prospect would. There was just a little wrench in the works.

“I was training a couple weeks after the fight (with Church) and I got a little bit of an injury, just a sprain, so I had to sit out for six weeks. I got cleared by the doctor and was back to training for maybe two days and I got the call for the fight. Normally I’m always in the gym, so I have a pretty good idea of what kind of shape I’m in, and then I got that phone call and it came at the absolute worst time.”

Now it was time for the 27-year-old to make lemonade out of lemons, or as he put it, “Make some magic happen in eight days.”

Stamann put in the hours to get down to the 145-pound weight limit, doing three-a-days up until weigh-in day.

“I pretty much did an eight-week training camp in eight days,” he said. 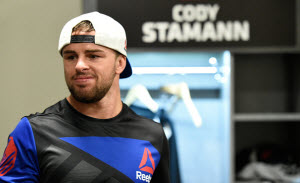 Then fight night came, and he knew he didn’t have a full gas tank to go 15 hard minutes. So he had to improvise against Ware. And deal with the first-time UFC jitters. But he eliminated those before they could take hold of him.

“I knew that I really didn’t have much in the gas tank, so I knew that if I had that nervous anxiety that would just kill my energy level and I’d be screwed after five minutes,” he said. “So I went in there with the mentality that I was gonna mess with him, talk s**t and put on a show one way or another. I did exactly what I planned on doing. It doesn’t always work like that, but that time it did for me.”

The bout went 15 minutes, but Stamann left Vegas with the unanimous decision win, with two of the three judges awarding him a shutout. It was an impressive debut, and one that saw him use brains, not brawn, to get the victory.

“I pride myself on having a high fight IQ,” said the Sparta, Michigan product. “I’ve always been that way in competition. In wrestling and boxing, maybe I wasn’t always the best guy, but no matter what, I always found a way to win. I figure out ways to beat people. I make them fight my fight and I think that’s what separates the good guys from the great guys.”

A week from Saturday, Stamann has his next assignment, a UFC 216 bout with highly regarded Tom Duquesnoy. It’s an intriguing bout for Stamann, who returns to 135 pounds, and he’s confident that he is going to pick up his second Octagon win at the expense of the “FireKid.”

“I’ve watched a lot of his fights, and I really thought that if he had taken the fights that I took in the U.S., I don’t think that he would be the superstar that he is,” he said. “I think because he was a standout in Europe for BAMMA, that’s really the reason he’s all hyped up. I saw him fight a guy when he was a big favorite, and that guy was touching him quite a bit and almost dropped him. In my eyes, if I would have been standing in front of him and I would have been his debut, it would have been a short night for him. He had two months to prepare for that fight and that’s what he looked like. I came in on eight days’ notice and I thought I was more impressive in my fight than he was in his.” 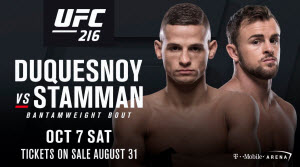 That confidence sets the stage for what could become an explosive clash of bantamweight prospects, and it was such an appealing opportunity for Stamann that he took the bout knowing that the UFC is heading to Detroit in December. But hey, if he exits the fight with little to no damage, he could make a quick turnaround. Stamann likes that idea, but he’s not ready to pull the trigger yet.

“I hate to make fight predictions because I’ve been in some nasty wars where you get in there and you get banged up and fighting two months later is just not feasible,” he said. “So I never look past a guy and I’ve gotta fight first. I’m just focused on this one, and if everything goes the way I think it will, I would definitely look at fighting again in Detroit.”

“It’s the first opportunity that I’ve had to really stake my claim in my weight class and show people that I am legit and that I’m going to be a force to be reckoned with down the road.”

Ahead Of Their Epic Rematch November 6 In The Co-Main Event Of UFC 286, Let's Look Back At The First Meeting Between Champion Rose Namajunas and Zhang Weili