Cody Stamann Hasn't Lost The Chip On His Shoulder

Cody Stamann's life may have improved since his rise in the UFC, but he still hasn't lost his edge that got him here.
By Thomas Gerbasi, on Twitter: @TGerbasi • Apr. 12, 2020

When it comes to the COVID-19 situation, call bantamweight contender Cody Stamann an optimist.

“Being quarantined here, it could be a lot worse,” said Stamann, who will take the April weather in his adopted home of Las Vegas over that in his hometown of Sparta, Michigan any day. But it’s more than that for the 30-year-old, who has come a long way both figuratively and literally since his Octagon debut in July 2017.

“Obviously, I have a million more resources now,” said Stamann, 4-1-1 in the UFC. “I have more assets, nicer things. But the mindset and things I care about really haven't changed much at all. I still have the same hobbies; I just have a little bit nicer stuff. I enjoy nothing more than going to the gym and working out. The goal is still the same and I'm definitely not the athlete I want to be long-term. I'm still gonna have the chip on my shoulder that I had then, and that's what keeps me hungry, keeps me in the gym, keeps me focused. I'm enjoying the fruits of my labor, but not too much.” 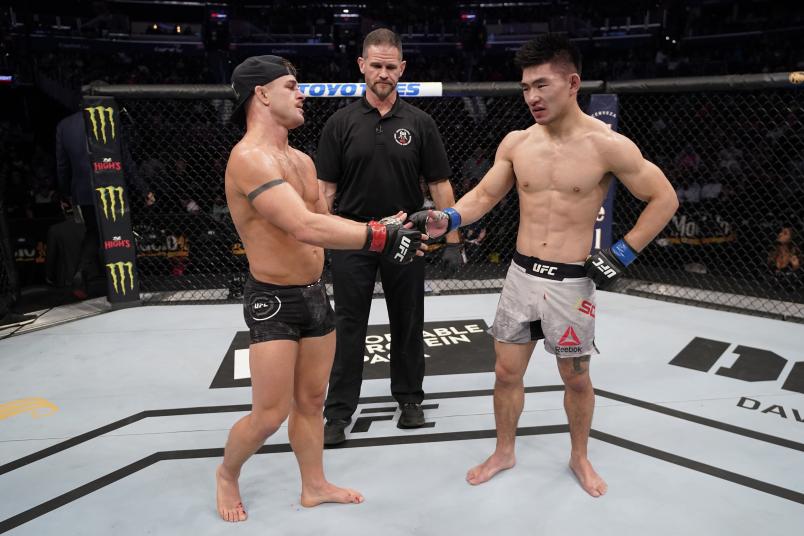 WASHINGTON, DC - DECEMBER 07: (L-R) Cody Stamann and Song Yadong of China react after their bantamweight bout is ruled a majority draw during the UFC Fight Night event at Capital One Arena on December 07, 2019 in Washington, DC. (Photo by Jeff Bottari/Zuffa LLC via Getty Images)

WASHINGTON, DC - DECEMBER 07: (L-R) Cody Stamann and Song Yadong of China react after their bantamweight bout is ruled a majority draw during the UFC Fight Night event at Capital One Arena on December 07, 2019 in Washington, DC. (Photo by Jeff Bottari/Zuf

Owner of UFC wins over Terrion Ware, Tom Duquesnoy, Bryan Caraway and Alejandro Perez, with his only loss coming in 2018 to Aljamain Sterling, Stamann has taken that blue collar Michigan approach to his bouts on the sport’s biggest stage, and he sees no reason to start switching things up now, whether in Sparta or Las Vegas.

“I just outworked everybody all the time and eventually it started paying dividends and I started passing guys that were better than me when I started,” he said. “I was super critical about who I was as an athlete and what my level of performance was, and I just wasn't one of those guys that hid behind their ego and talked about how tough they were. I just kept breaking myself down and building myself back up to the point where that process just became secondary. I didn't even care as much about people thinking I was good; I just wanted to be good. I wanted to be the best, and that same process got me where I am.”

And though his most recent bout was a controversial draw with Song Yadong last December, one in which MMADecisions.com’s post-fight poll saw Stamann winning on 10 of the 14 media members’ scorecards (with four draws), “The Spartan” remains in the No. 11-spot at 135 pounds, and he shook off the initial disappointment with the verdict and moved on.

“At the time, I was devastated,” Stamann admits. “I was heartbroken about the whole situation and I thought I had been cheated out of something I worked really hard for. But looking back, if you're thinking long-term, that wasn't that long ago and it feels like a lifetime ago now because so much has happened since then. I don't dwell on the past, and I think having a short memory is a blessing in this instance because now I don't think about that fight, and if I did, it would be in a completely different light from what I thought about it then. I'd be watching it, trying to figure out what I did wrong and what I could improve on instead of watching it and getting frustrated and wanting to throw the remote through the TV, like I did for the first few weeks. If you look at a career long-term, if I would have went out and got knocked out or something really devastating would have happened to me in that fight that would change the trajectory of my career, that’s one thing, but going out and getting a draw with everybody knowing that I won, my position in the UFC doesn't really change that much. It's just another fight, just another building block, just another thing that I can learn from.” 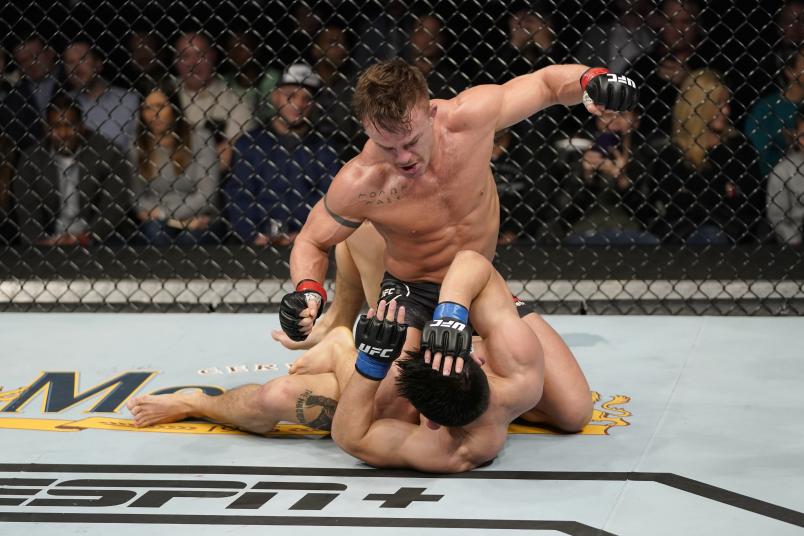 Being sidelined with the rest of the roster also gives him plenty of time to brush up on the mental side of the game, and he’s embracing that time.

“I feel like this is an awesome time to self-reflect and go back and look at past performances and look at issues and problems that I had and try to physically and mentally fix those things and really take the time to work on myself and do everything I have to do to get better, not only in the cage, but as a person, too,” Stamann said. “Obviously, this is a wild trip; anybody who says it's not is a liar.  But if you're dedicated and focused and you want these things to happen and believe they can happen and you're putting the work in every day, you can do it.”

That’s an optimist, right there. And that carries on with Stamann’s view of a 2020 no one saw coming.

“I have to be like that,” he said. “If you want to be successful as an athlete, you better be looking at things as optimistically as you can because this is a crazy, crazy life and a crazy world and you never know what's gonna happen. Yes, I do think that 2020 is gonna be a big year for me and a big year for the UFC and I'm absolutely expecting to have a semi-normal year. I had a minor setback, but what's a few months in a fighting career. This is a marathon, not a sprint, and you've got to learn to roll with the punches every single time because if you decide to stick your neck out and stiffen up, you're gonna get knocked on your ass, and that's hard to come back from.”