Cody Stamann Is Firing On All Cylinders

Through Hard Work, Discipline And Trust In Himself, Cody Stamann Is In A Great Place Ahead Of UFC 283: Teixeira vs Hill
By Thomas Gerbasi, on Twitter @tgerbasi • Jan. 18, 2023

Cody Stamann is a good guy, one of those folks who reps his family, team and sport like a gentleman, doesn’t talk trash or end up on the police blotter, and when it’s time to fight, he shows up, does his job and then it’s back to the gym.

So, it wasn’t a surprise when he was at the St. Jude’s Ranch for Children in Nevada with some of his UFC colleagues in December, talking to kids who got a bad hand in a lot of ways. And while it was already in his nature to do something like that, this time it meant a little more, because Stamann grew up in a house in Michigan where his parents welcomed foster kids, once having as many as eight around him.

Maybe this is how he learned to fight, battling for the bathroom in the morning.

“Yeah, exactly,” Stamman laughed. “Well, I was the oldest, so I was always kind of like the protector. All the younger kids, they were coming to me, ‘so and so is being a bully,’ and I'm like, ‘Well, tomorrow when we go to school, show me who so-and-so is and we're going to sort this out.’”

He laughs, but years later and now living in Las Vegas and competing as a UFC bantamweight, he still feels protective towards kids going through some tough times, and when he visited St. Jude’s, he wanted to leave an impression. 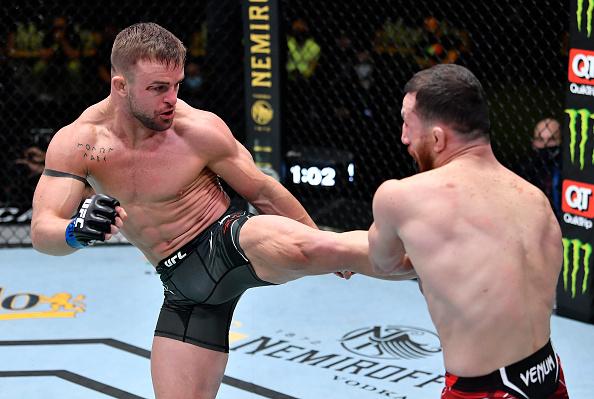 Cody Stamann kicks Merab Dvalishvili of Georgia in a bantamweight bout during the UFC Fight Night event at UFC APEX on May 01, 2021 in Las Vegas, Nevada. (Photo by Jeff Bottari/Zuffa LLC)

“Going there was kind of like a flashback,” he said. “And just going as a different person, too, going as an athlete and someone they look up to instead of just someone that they live with that ends up being their foster brother. It was a different experience. And I'll tell you what, I was probably two, three times as nervous to talk to those kids than I've been to go out and get in a cage fight just because I really wanted to say the right thing. I wanted to be meaningful. I wanted to be honest. So on the bus ride there, I'm just racking my brain, ‘What can I say? How do I get through these kids?’

“And honestly, they were really cool and it's just an amazing program there. It's probably the best I've seen. And they're having real results. I met a girl that was in a bad way, and now she's on her way to become a nurse. So it was amazing to see. They really are making a difference. And obviously you can't help everyone, but their success rate is astounding. And it's really because of the people that work there and the people that volunteer there who really care. It was a really beautiful experience. I mean, I'm already trying to figure out how I can be more involved in that program because it was amazing for me. We get beat up on the little stuff, and here's somebody that doesn't have a home and was abandoned when they were a kid. And that really puts things in perspective and makes you kind of appreciate your life more and makes you realize how good you have it.”

So good that Stamann was going to get on a plane to Rio de Janeiro, Brazil to get into a fistfight with Luan Lacerda and about to get told that he’s going to die (in Portuguese) by an arena full of screaming fans on Saturday night. If that doesn’t take the good vibes out of your system, nothing will. Unless you’re a professional prizefighter like Stamman, who loves the whole idea of being the man in the black hat this weekend.

“I can't wait,” he said. “Honestly, I'm prepared for it. I've fought in enemy territory in places where I wasn't a favorite, but not like this. I cornered my friend down there and I didn't know what everyone was saying. So the fight’s starting, I turn to someone, and I'm like, ‘Hey, man, what are they chanting right now?’” 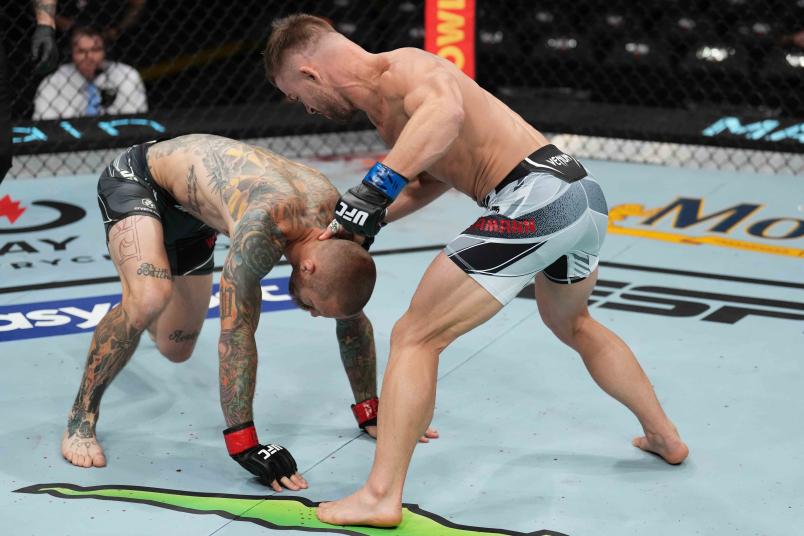 Stamann laughs, relishing both the memory and the prospect of what’s to come.

“I was like, ‘Man, these people are ruthless,’ but I'm ready for it. I'm actually excited. I think I'll relish that and I really think I'll enjoy those moments. As much as it might seem like it's terrible, I think I'm really going to enjoy giving the crowd a big bow after I put this guy on his face.”

Oh yeah, there’s a fight going on in Rio, and Stamann is here for all the smoke the promising newcomer has to bring, especially with it being a new year and the 33-year-old eager to start a winning streak following a blistering 59-second knockout of Eddie Wineland last June. That win put “The Spartan” back in the win column after a three-fight skid, and he’s ready to get back in the Top 15 mix at 135 pounds ASAP.

“I think I'm going to be hitting on all cylinders,” he said. “I've been healthy pretty much all year and I know that's just going to do wonders for me in the cage because I haven't really been healthy for this long to really build on skills and to put it all together. This is a huge opportunity for me, fighting a debut guy in Brazil, in his hometown, to see what I can actually do. I got a glimpse of what I'm capable of in June when I fought and when I let my hands go. I'm like a V-8 that's been hitting on three cylinders most of my UFC career, and I feel that way. I was fighting not to lose, but now I'm fighting to kill you when we get in a cage. I don't want the judges to come into account. I don't want to go 15 minutes. I want to put you out as fast as I possibly can. And I think against this debut guy in Brazil, I really think I'll be able to find those shots against him and put him face down. I think this is going to be another highlight for my career.”

Stamann’s earned it. Not just some good fortune shining his way, but the acclaim that comes with it. Not that he’s chasing it, but he does wonder whether the story of a hard worker getting his shot and making the most of it even matters to a younger generation that grew up on flash and highlight reels. 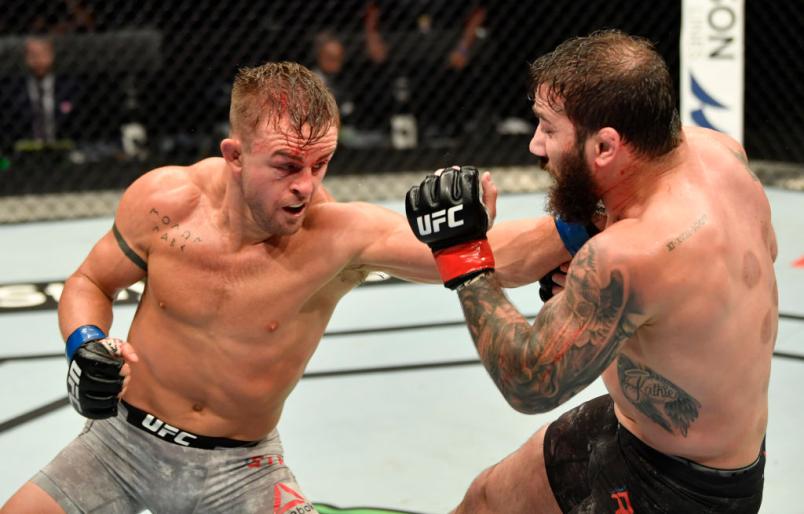 “Getting in the UFC, I just thought that people would respond to me a different way,” he said. “I'm like, ‘Man, I'm a rough and tough, blue-collar American from a small town doing something that nobody ever imagined I was capable of doing. Maybe not even myself. And I thought people would attach to that, but in reality, it's the opposite. People are like, ‘Oh yeah, but he sucks.’ And that was something that really threw me off. I'm like, ‘Man, do you guys have any idea how hard I work to just get here?’ And now I have to work exponentially as hard to stay here and no one still respects me. If I beat a guy, it's like, ‘Oh, well you were supposed to beat that guy. When I lose, it's ‘Oh, he's washed up, he's done.’ And it's just, what can I do? So I kind of just pulled away from all of it and focused on the people that I know care about me and making them proud. And that's not the greatest strategy to build this, but when I go to sleep at night, I sleep soundly because I know I take care of the people that take care of me, and I'm a honest, good person in and out of the cage.”

RELATED: Teixeira Visualizes Winning The Belt In Brazil | Jamahal Hill Here To Answer All The Questions

It may not work with the TikTok crowd, but Cody Stamann certainly left an impression with the folks at the St. Jude’s Ranch.

“I was talking to them about discipline,” he said. “The discipline is what separated me from a mundane life of poverty or working construction or doing something that all my friends ended up doing. I made a conscious choice to follow a goal, a dream that I had. And every single day I woke up and I did the things that I knew I needed to do. There's no secret. I was telling them I started at zero. We all started at zero and we built into this. And it's possible for you guys to do the same, but it requires discipline. You have to make the choices every single day to do the right things. And if you do that over time, the self-confidence and the self-esteem and everything comes with that.”